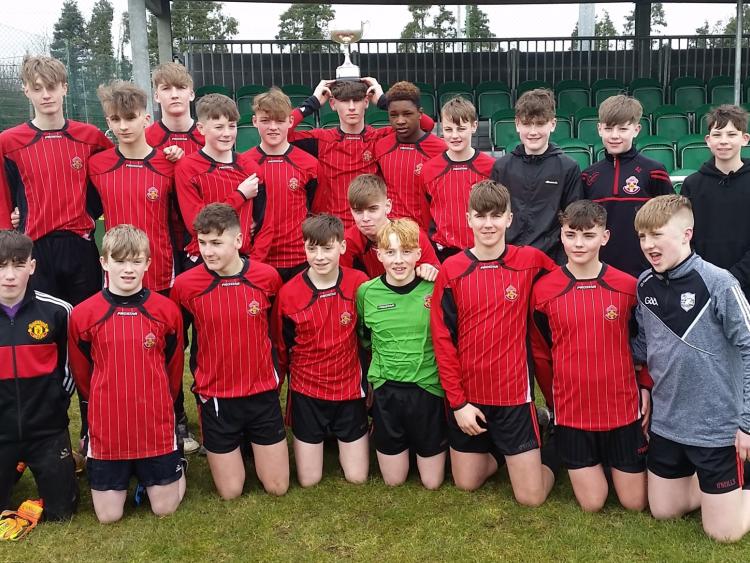 Carrick-on-Suir CBS Secondary School are Munster Minor Trophy champions for the fourth year in a row.

The game proved to be very entertaining with plenty of goalmouth action at both ends. Newcastle West settled better and were gaining good ground but could find no way past CBS’s well-disciplined back line of Reece O’Mahony, Dylan Casey, Oscar Geoghan and Paudie O’Shea.

CBS were finding it difficult to retain much possession in the early stages, but an early goal from Evan Foley settled the nerves and allowed them to get into the game. A great kick from Kieran Barry in the CBS goal skimmed off a Newcastle West player and deflected out to Evan Foley on the right hand side, who stormed into the box and smashed the ball into the roof of the net.

Braedon Wheeler was starting to be dominant in midfield, with Padraig Fahey and Neil Moriarty getting more space to control the game. Francis Roche set up a chance for Braedon Wheeler which drifted wide. Paudie O’Shea was next to try his luck after a darting run but was also off target. Tyler Dunphy was causing plenty of problems down the left wing and as Newcastle West doubled up on him more space was being created.

The free count was very much against CBS and as a result pressure built up again as Newcastle West pushed for an equaliser before half time. The Limerick side came close following a goalmouth scramble but Dylan Casey smothered the attempt at the near post.

CBS extended their lead on the stroke of half time. Braedon Wheeler played a great ball into the channel for Francis Roche, who cut into the box and squared a perfect ball to the on running Evan Foley who finished well at the far post.

CBS were put under a lot pressure in the second half, but Jack Hegarty came in to firm up the defence with Ronaldo Kivankufi also entering to put pressure on the Newcastle West backline.

Within seconds, Ronaldo Kivankufi had his first shot which drifted just wide and moments later he had another attempt well held by the keeper.

Newcastle West applied pressure again and a great tackle from Oscar Geoghan kept them out. However, with 18 minutes remaining the Newcastle West pressure paid off as they pulled one back.

The CBS charges showed character and moments later Kieran Barry split the defence once more and Ronaldo Kivankufi was on hand to jump above the on rushing keeper and head the ball into the top corner.

CBS were looking comfortable heading for full time before Newcastle West pulled another goal back to set up a frantic finish. Newcastle West threw everyone forward as the final whistle never seemed like coming, but Glen Power and Danny Murphy gave CBS some control in possession. After yet another free against CBS in the sixth minute of stoppage time was cleared, the final whistle blew to the delight of the entire squad.

“It is a fantastic achievement for the school to win this competition four years in a row and a great credit to this team and the teams before them. Our thanks to the clubs who have supported us - Carrick United and Piltown AFC for the use of their facilities over the season,” manager Shane McCormack said.