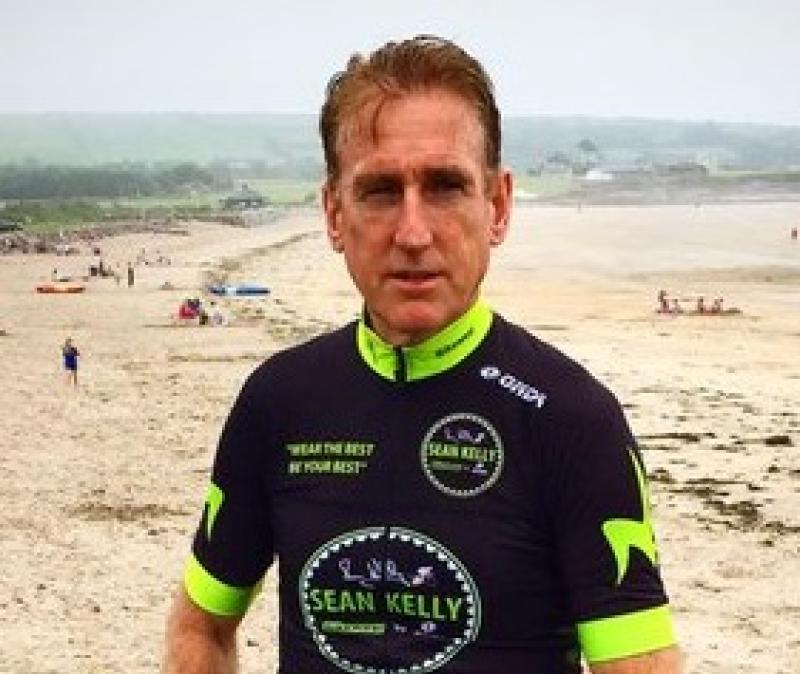 Carrick-on-Suir cycling legend Sean Kelly is urging the public to get on their bikes for charity this summer.

Carrick-on-Suir cycling legend Sean Kelly is urging leisure cyclists and the culturally curious to get on their bikes in the Déise county in the early hours of Saturday, July 14, for a landmark cycle which will help raise funds for two very worthy causes.

The Sean Kelly Dawn Chorus Cycle will be an event with a difference as participants take to the start line at Rainbow Hall, Kilmacthomas, at 4:30am.

Following on from the success of the Sean Kelly Tour of Waterford event which took place over an 11 year period from 2007 to 2017, Kelly is now backing this fundraising cycle on the Waterford Greenway, with part of the proceeds from the event going to Waterford City and County Mayor Cllr Pat Nugent’s nominated charities.

Unfortunately, the Sean Kelly Dawn Chorus Cycle clashes with the Tour de France and the sporting great will be on the continent for the Tour. But Kelly says he will be keeping a close eye on proceedings on social media and urged everyone to get involved in what will be the first ever Dawn Chorus Cycle and the highlight of this year’s four day Comeraghs Wild Festival programme.

The event is limited to just 500 participants and cyclists aged 10 and over, and anyone interested in completing either of the two cycle routes is encouraged to register online by July 2.

“After the fantastic success story that was the Sean Kelly Tour of Waterford, I’m delighted once again to be able to lend my support to another exciting Waterford Cycling event. I wish everyone a fantastic, fun-filled early morning on their bikes while enjoying some of the most breathtaking views imaginable,” Kelly says.

Mayor Nugent adds: “Solas Cancer Support Centre and St. John’s Special School, Dungarvan, will both benefit from this event. They are two fantastic charities and do phenomenal work in our community. It’s great to run such an event on the Waterford Greenway and we are very thankful to Waterford giant Sean Kelly for supporting this leisure cycle.”

The leisure and pleasure event will start at 4:30am when the Sean Kelly Dawn Chorus East Route leaves Kilmacthomas for Waterford city’s Bilberry Car Park on a 46km return trip. The second group of cyclists will set off from the same starting point at Rainbow Hall, Kilmacthomas, at 5am and travel the slightly shorter 43km West Route to Dungarvan and back. Both events will take place fully off road on the magnificent Waterford Greenway.

The entry fee is €40 per adult, €20 per child over 10 and a family of four can register for €100.  The entry fee includes refreshments at the halfway points - Dungarvan and Bilberry – as well as a post event healthy breakfast back in Kilmacthomas. Each participant will also receive a goody bag at the finish line. Most importantly, 50% of the entry fee will go towards the two nominated charities.

Trails officer with Waterford City and County Council, Johnny Brunnock, says given that it’s Bastille Day there will be prizes for the best French costumed cyclists. “We look forward to a great turnout and a carnival atmosphere. In the interest of safety, those taking part must observe the 18 kmph speed limit.  All entrants must be over 10 years of age and anyone under 16 must be accompanied by an adult.

“We’re urging everyone to get behind the inaugural Sean Kelly Dawn Chorus Cycle and urge clubs, societies, workplaces, groups of friends to register now and get on their bikes for a great day out and to help two very worthy appeals.”

The Sean Kelly Dawn Chorus Cycle is one of the key events in this year’s Comeraghs Wild Festival programme. This 2018 Festival runs from July 12 to 15 and includes surfing and seaweed foraging events, a concert at Mahon Falls with the Dublin Gospel Choir, heritage events, a céilí and more.