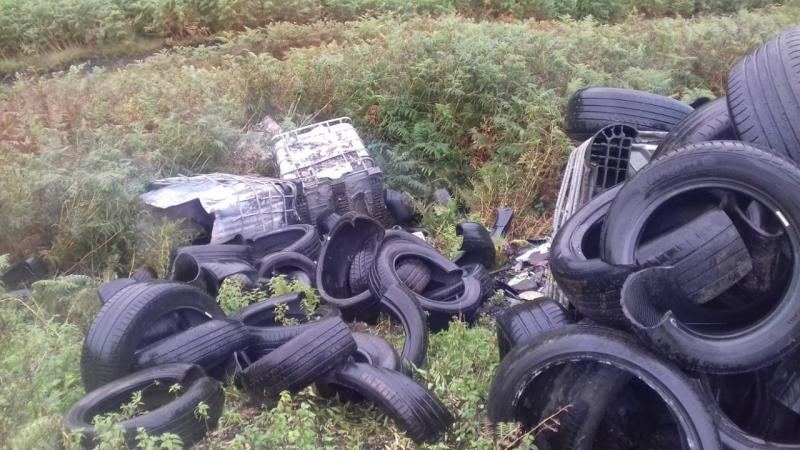 The illegal dumping of cut tyres and other rubbish in Clogheen, County Tipperary, has left the village outraged.

Clogheen Tidy Towns chairperson PJ English described the illegal dumping in the area popular with walkers and runners as “toxic”.

Cllr Martin Lonergan said the ongoing dumping of rubbish is a “major issue” for many communities across Tipperary.

“In my own area and in particular along the Knockmealdown Mountains, we have witnessed and experienced both domestic and indeed industrial dumping varying from bags of domestic rubbish to electrical appliances, tyres and building rubble and materials, sometimes indiscriminately dumped in many of our most scenic areas.

“In some instances, the dumping was perpetrated by so called unregulated collectors, unknown to those who had engaged them to dispose of the rubbish or materials in the proper manor,” Cllr Lonergan said.

Cllr Lonergan said Tipperary County Council’s Environment section needs more resources on the ground such as patrol officers and environmental officers. He called for offenders to be named and shamed publicly if convicted.

“Unfortunately, people have learned to remove any details such as bill heads or information that could connect them to the alleged dumping. The only main option available, I feel, is the broader roll out of further CCTV monitoring where ongoing littering and dumping black spots appear to be. Following on from this - should a conviction be imposed on an offender - they need to be named and shamed publicly in the local press and indeed on the council’s website and whatever forum that may be beneficial to deter them and prospective offenders from carrying out illegal dumping. To date, we haven’t seen this occur,” he continued.

“In terms of domestic dumping, I feel we need to look at those who may be struggling with various bills, mortgages, may have been made unemployed and simply cannot afford to pay the rates to the various refuse collectors. The county has many Civic Amenity Sites managed by the Local Authority and indeed many are privately managed and can take almost all rubbish. It needs to be gotten out there that these are available to take rubbish and are an extremely cost effective way of disposing of rubbish. We also should look at the possibility of introducing a community skip in certain areas, paid for by the Local Authority, which could be delivered periodically to estates, villages and towns,” Cllr Lonergan added.

Fines for littering
Leaving or throwing litter in a public place is an offence that can be subject to an on-the-spot fine of €150 or a maximum fine of €4,000 if you are convicted of a litter offence in the District Court. Where an offence continues after conviction, the person concerned is guilty of a further offence and liable to a fine not exceeding €600 for each day during which the contravention continues.
The Protection of the Environment Act 2003 introduced conviction on indictment and carries a maximum fine not exceeding €130,000 and a fine not exceeding €10,000 per day for continuing offences.
You can be issued with an on-the-spot fine by a litter warden appointed by the Local Authority or by a member of the Gardai. If you are convicted of a litter offence, you may also be required by the court to pay the Local Authority's costs and expenses investigating the offence and incurred in bringing the prosecution.