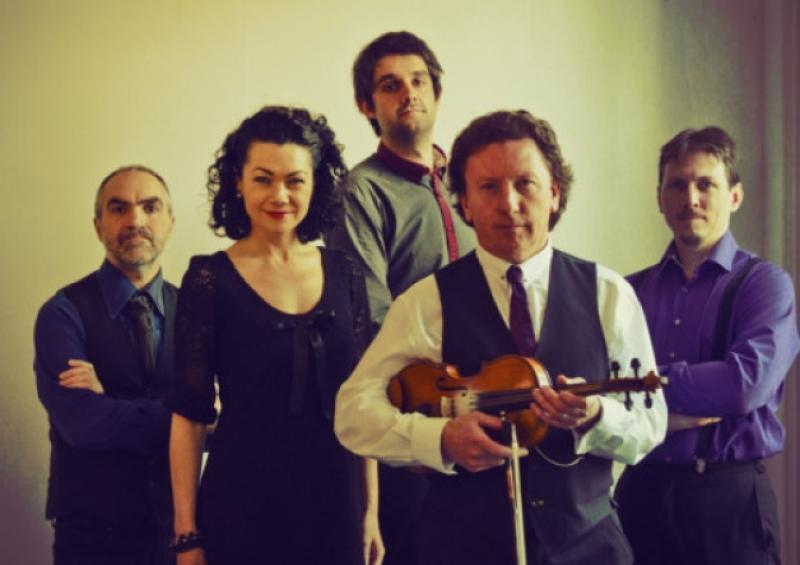 Two world class traditional musicians, both revered in their homelands and honoured around the world, will come together for one incredible night in Clonmel, to perform a concert that is sure to be one of the highlights of this years Junction Festival.

Over the years some of the most memorable nights at Junction Festival have been those that brought together great artists to create unique events that have lived long in the memory of those who were lucky enough to be there.

These include Máirtín O’Connor and Israeli oud player Yair Delal in 2005, Liam Clancy and the legendary blues singer Odetta in 2006 and Lisa Hannigan and Cathy Davey in 2010.

Following in this tradition the Festival has programmed this exciting double bill with Ghalia and Gavin. Each will perform their own concert set which will be followed by a unique set performed by the 5 members of De Dannan with Ghalia and her two Egyptian musicians, a unique event specially prepared for Junction Festival.

At 17 Frankie Gavin was all Ireland flute and fiddle champion and had already formed De Dannan with bouzouki player Alec Finn and several other players form the Galway trad scene.

Among the many highlights of touring with De Dannan, Gavin sites as specially memorable performing for 3 U.S. Presidents and touring China with the “Dublin Philharmonic Orchestra” where they played concerts that were aired on ‘China Central TV’ to over 500 million viewers.

After 33 years, 14 albums and a number of changes in the line up, the group disbanded in 2003, reforming in 2008 as “a De Dannan of the 21st century” with a line up led by Gavin, with Barry Brady, Colm O’Caoimh, Paul O’Driscoll and Michelle Lally on lead vocals. Michelle follows in the long line of amazing singers in De Dannan such as Mary Black, Dolores Keane and Maura O’Connell.

Most recently Frankie and De Dannan travelled to Russia (February 2013) where they represented Ireland in the presence of the Irish Ambassador to Russia. On Friday, May 3, Frankie was made Irish cultural ambassador to Italy, at a ceremony in the municipal building of Verona.

Like Gavin, Ghalia grew up in a very musical family. As a young girl she was performing Arabian and Indian dances at family parties. Her early influences were varied. In addition to being immersed in the traditional music of Tunisia she was also being exposed to French chanson, Egyptian and Indian theatre music, melodies from Syria and Iraq and the “tartil”, the sung readings from the Koran.

Since moving to Brussels in her mid twenties Ghalia has established herself as one of the most exciting singers coming from the North African region, recording a number of celebrated CDs.

Inspired by her diverse musical education Ghalia has continued to explore musical traditions around the world, delving deeply into the roots of other traditions to find the connecting point which she describes as the search for universal melody.

For the Clonmel show Ghalia is accompanied by two Egyptian musicians Ayman Mabrouk on percussion and Ayman Asfour on violin, with whom she has been working on an exciting new repertoire.

This concert which is on in Old St Marys Church on July 12th has all the ingredients of an unforgettable night.

Tickets €22/€18 are on sale now at www.junctionfestival.com.