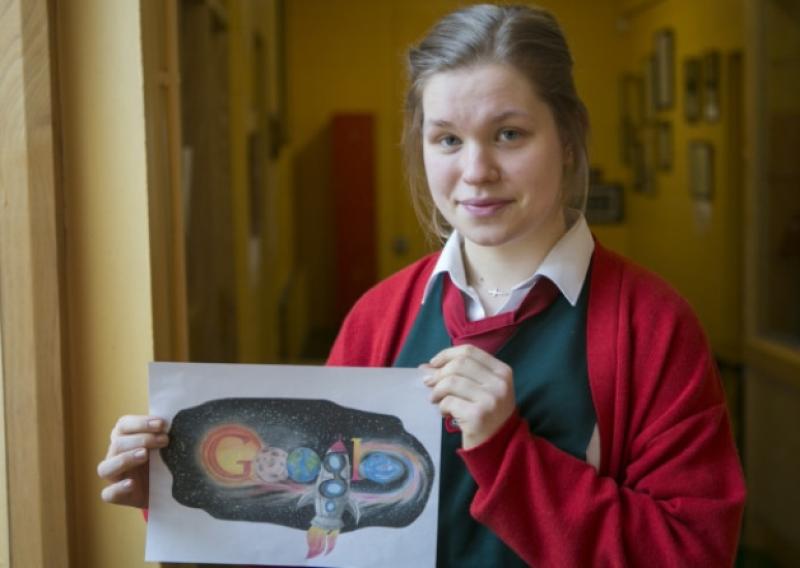 A Clonmel student has reached the final of the sixth annual Doodle 4 Google competition.

A Clonmel student has reached the final of the sixth annual Doodle 4 Google competition.

Loreto Secondary School art student Martyna Michalowska is one of 75 children from across the country who have the chance of being named Ireland’s top doodler, with their doodle displayed on the Google Ireland homepage for millions to see.

Martyna, who’s originally from Poland, came to Ireland eight years ago with her family and settled in Clonmel. She loves attending the Loreto where she is a Second Year student. Her favourite subjects are German, History and of course Art, Craft and Design.

“She has proved herself to be a very accomplished artist in all mediums, not only in drawing and painting but also in clay modelling and printing”, stated her delighted art teacher Margaret O’Shea.

Martyna’s doodle was inspired by the universe and she’s now looking for votes to help her reach the last stage. People can vote for their favourite doodle on www.google.ie/doodle4google.

Voting will close at midnight next Monday, March 10. The five most popular doodles, one from each age category, will go forward to the final and one of Google’s professional doodlers will select the overall winner.

From an original entry of more than 2,500 primary and secondary school students from around the country, who submitted entries on a theme of ‘My Adventure’, the 75 finalists were shortlisted by a panel of judges.

The five most popular doodles, one from each age category, will go forward to the final and one of Google’s professional doodlers will select the overall winner.

“The level of creativity and imagination shown was fantastic and left our judging panel with a tough task of shortening the list to 75”, said John Herlihy, Head of Google Ireland.