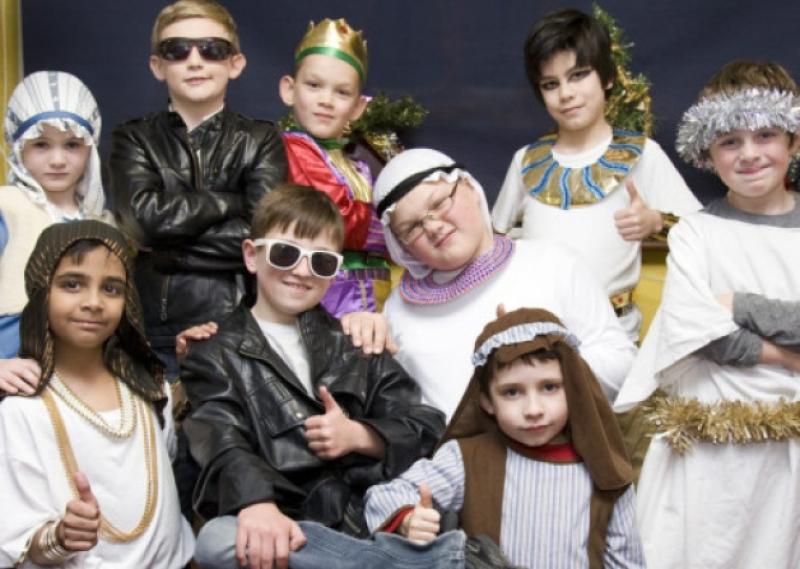 Music, song and dance were all evident as all the 246 boys enrolled took to the stage.

Junior lnfants explored the theme of Christmas through a selection of songs, action rhymes and dance. Each letter of the word CHRISTMAS was represented by the boys who performed well known Christmas songs such as Rudolph the Red Nosed Reindeer, Santa Claus Is Coming to Town and We Wish You A Merry Christmas.

The boys also displayed their work as Gaeilge and performed some Gaeilge rhymes such as Hata Dearg, Bronntanais agus Bualadh Bos. The boys were excellent and for many it was their first time on stage.

Next up were the Senior Infants who travelled back in time with their class to meet everybody in Bethlehem on the most wonderful night of Jesus’ birth. We met the shepherds, angels, the wise men, landlords, King Herod and his men, Mary, Joseph and of course that “someone special” in Bethlehem. Senior Infants showed us all the different people who were there celebrating the birth of Jesus. Senior Infants spread lots of Christmas cheer with their beautiful rendition of We Wish you a Merry Christmas.

The last act before the break was First, Second and Third classes who presented the lovely Christmas Story called The Shepherd Boy. Samuel (Sam for short) was the youngest brother in a family of Nazarene shepherds. He was small for his age and longed to grow enough to become a shepherd boy and join his brothers and father on the hills. Sam was befriended by Joseph the carpenter.

The plot unfolded - Joseph with his wife Mary and Sam found themselves in Bethlehem. It was Sam who found Joseph the stable. The story had lovely songs and the boys did a wonderful job of introducing Sam and all the characters of this story to us.

Last but not least our Fourth, Fifth and Sixth Classes performed “The Egyptian Nativity”. The boys were very excited to present this quirky and funny play which at its heart reminds us of the real reason for celebrating Christmas. The bible tells us very little about Mary and Joseph’s escape to Egypt, but one thing is certain; this would have been a perilous journey necessary to save baby Jesus from King Herod. The boys really enjoyed the show and the jokes and songs were enjoyed by all! Special mention for the fabulous costumes on stage.

Congratulations to all the pupils from our school who performed so well on stage. Also to the teachers, SNAs and classroom assistants who spent so much time preparing scripts, sets, costumes and props for the show. To Willie, our caretaker who was invaluable to everyone despite being called in every direction. We hope that you were entertained and many thanks to everyone who supported our show.