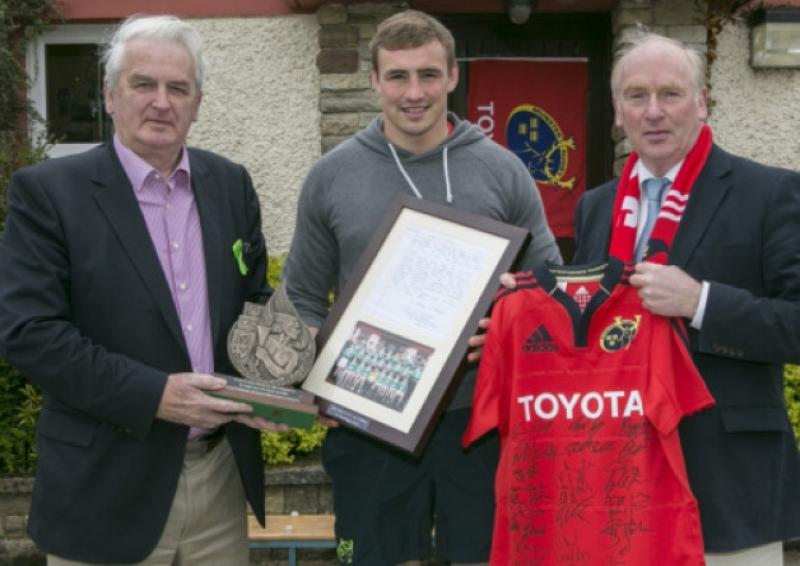 There was great excitement on Friday, May 24 as past pupil, Munster rugby player of the year and current member of the Irish senior rugby squad, Tommy O’Donnell visited Grange N.S.

There was great excitement on Friday, May 24 as past pupil, Munster rugby player of the year and current member of the Irish senior rugby squad, Tommy O’Donnell visited Grange N.S.

His proud parents Tom and Mary were also guests on the day. A presentation of a rugby trophy with the crest of the four provinces was made to Tommy by Chairperson Liam Ahearn, on behalf of the Board of Management, staff, parents and children to mark his achievements.

Tommy was very appreciative of the welcome and spent time with the children for photographs, autographs and even had time to take a training session and referee a tag-rugby game.

Tommy was welcomed by 6th class pupils Kieran Lambert and Tadhg Burke who listed Tommy’s rugby sporting achievements such as, playing 66 times with Munster, Munster Rugby Player of the Year, playing for Ireland youths, U-19 and 20 teams and scoring four tries this season. They finished by asking for a round of applause for their sporting hero.

Principal, Mr. Tomas O’Slatara reminded Tommy of some of his sporting achievements during his time in Grange School. He made a special mention of the County C and B Cumann na mBunscol football finals won by the school when Tommy was a member of the teams in 1997 and 1998.

Mr. O’Slatara also remembered the competitive and fearless nature of Tommy’s play which was evident in particular during the A division football semi final played in Marlfield in 1999.

Tommy was surprised and delighted to be presented by Mr. O’Slatara with a copy of his “I Have a Dream” letter written in 1990 along with a photo of the B Division County Championship team from 1998. Tommy presented the school with the jersey he wore when playing against Racing Metro in the Heineken Cup.

Tommy also presented the school with two jerseys signed by the Munster Team which will be used for a fundraising drive for resources for the new classroom being built at present.

It was a memorable day enjoyed greatly by staff, children and guests as can be seen from the following comments made by some of the children in 6th class.

Chantelle O’Dwyer enjoyed Tommy’s visit because he told us “to never give up on your dream no matter what!”

Adam Heeran enjoyed the group photo taken with Tommy and his neighbours from Loughloher. After the photo was taken we shook his hand. I was delighted when he said he remembered me well”

Thomas Gartlan was impressed when 2 or 3 children from each class came up to ask Tommy questions. “I’d say he was as proud of them as they were of him”

Jane Mansfield said ”My favourite part was when we had the assembly and Mr. Slattery read out a story that Tommy had written in 6th class titled ‘I Have a Dream’ Most of his dream has come true already - except for going bungee jumping.”

Kate Guthrie had an unusual connection with Tommy! “I really enjoyed his visit as he has the same birthday as me!”

Cliodhna O’Toole enjoyed when Tommy told her about his time in Grange and about begging Mr. Slattery to let the class play on the pitch. “It demonstrated that he was like us and did the same things we do. If he was once where we were doesn’t that mean that we can be where he is in the future”

Tommy is currently with the Irish team on their trip to the United States and Canada. His sporting career will be followed with great interest and pride by the children staff, and parents of Grange N.S.