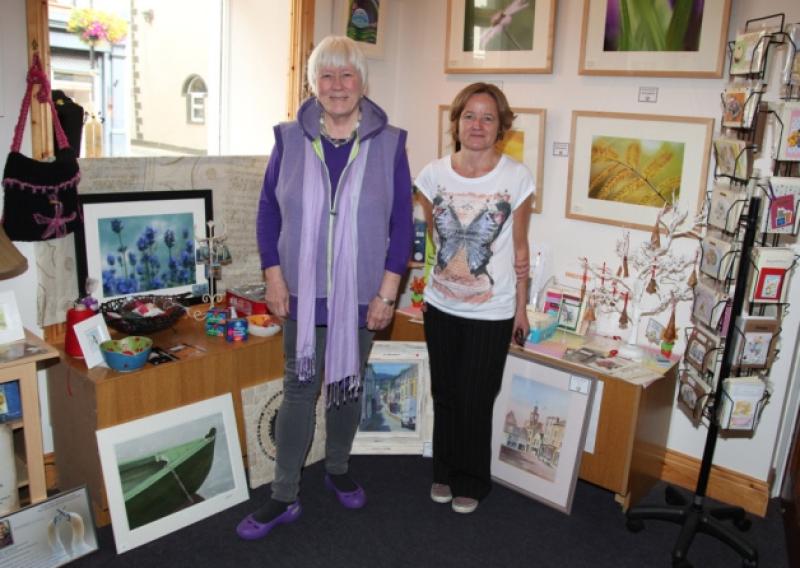 The Tudor Artisan Hub in Carrick-on-Suir is an Aladdin’s Cave of the best of local paintings, photography, crafts and music.

The Tudor Artisan Hub in Carrick-on-Suir is an Aladdin’s Cave of the best of local paintings, photography, crafts and music.

The walls of the 104 year-old former Technical Institute building at 42 Main Street are papered from floor to ceiling with paintings, photographs and graphic art and its shelves are filled with handmade leather bags, weaved rugs, pottery, jewellery, greeting cards and CDs featuring local musicians and singers.

The Hub is Carrick-on-Suir’s first dedicated showcase for the arts and music and since it opened in May more than 40 visual artists, musicians and songwriters from Carrick-on-Suir and surrounding communities have signed up to have their work showcased and sold there. The artists pay the Hub a monthly fee for showcasing their work and the Hub receives a commission for any sales.

The business is the brainchild of Dungarvan native Linda Fahy. She was involved in organising art exhibitions for Brewery Lane Theatre and the Clancy Brothers Music & Arts Festival and various artistic pop up shops before taking the plunge to turn her passion into a business.

Linda got the Artisan Hub up and running through taking part in the Carrick-on-Suir Entrepreneur of the Year competition.

“I found the structure of the programme excellent. You had to put a business plan together and you received a lot of mentoring, which was tailored to the enterprise you were setting up. Carrick-on-Suir Business Association gave us great support as well sponsoring hours for such services as solicitors and accountants.”

Linda is delighted with the public response to the Artisan Hub. “We have received a lot of support from the community. Everyone who comes in here just loves the space,” said Linda.

“We have built up a network of artists from the Suir Valley and we have new artists coming in to us asking if we have space available.

“I act as an agent for them and I have had craft shops coming in looking to source artists.”

As well as acting as a shop window for visual and performing artists and crafts people, the Hub assist them as well as local businesses and community groups with marketing, PR, graphic design and business support work.

Ballingarry based painter Ann Brennan is one of the Hub’s clients. She says Linda has sold a lot of her paintings in the past few months and has been great at promoting her work on Facebook. Ann has also started using the Hub as a venue for her oil and acrylic painting classes.

“The Hub is brilliant for promoting local artists and for Carrick or any town to have a somewhere like this for artists is fantastic,” she said.

The Camphill Community in Grangemockler sell their handcrafted scarves, cushions, bags, lavender pillows and jewellery at the Hub.

Kathleen O’Neill of Camphill said for them the Hub was a place where they can show the community the work that is being done in Camphill as well as a sales outlet.

Since it opened, the Hub has also played a central role in festivals and cultural events in Carrick. It acted as the headquarters for the Clancy Music & Arts Festival, and hosted arts & craft demonstrations for Newfoundland tourists during the Ireland Newfoundland Festival opening weekend.

The Hub hosted more arts and crafts demonstrations and an exhibition and competition of youth mobile photography for the recent national Culture Night celebrations.