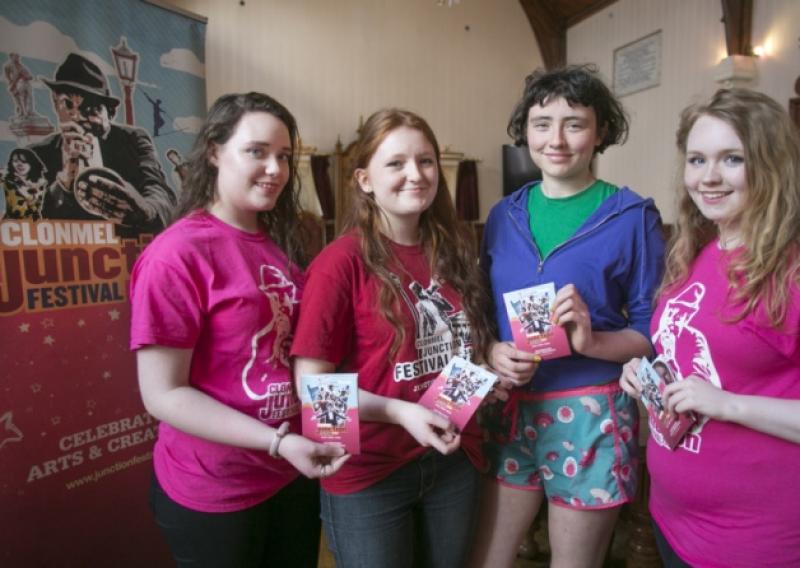 The 2015 programme includes a Moroccan night with chart toppers Kasba at Clonmel Garden Centre, theatre in the Scots Hall in Anglesea Street with Near Gone, an immersive comedy in five different pubs and bars over six nights with Early Doors, family fun and art projects in the redeveloped Denis Burke Park (Riverrun Project, The Drive and Fire Storm), candlelit music in Marlfield Church (Edel Meade) and access for all to the Donoughmore gentleman’s club with I Saw Stars!

The Festival, which runs from July 3-12, is also producing three new works with international collaborators from Canada, Australia and Austria that have been developed by the Festival’s creative ensembles. This includes the Junction Festival Choir’s opening night concert with the RTÉ ConTempo String Quartet with piano virtuoso Stephen Parker, featuring music by writers and artists who fought in the First World War; and Belonging(s), where Canadian artist Cathy Gordon leads a project on how we in Clonmel feel about “belonging”.

Meanwhile, stories gathered from the community by the Junction Festival Youth Ensemble will be presented in an interactive and changing exhibition at Nest on Mitchel Street, while Australian company One Step At A Time Like This return to Clonmel to work with the young artists, The Junction Joes, to make another walking experience show as a follow-up to last year’s shows Letters and People. This work will then transfer to the Traverse Theatre in Edinburgh for the Fringe Festival in August.

The festival programme has five award-winning theatre shows, three from Ireland (Catalpa, The Man in the Woman’s

Shoes and Charolais) and two from the UK (Near Gone and Early Doors). For children and families there are two shows

from Italy with the return of the very popular bubble magician with a new show called Overture; and Vitamin,

which has been described as “inexplicably wonderful comic theatre”.

The music programme is headlined by Meteor Award winner Mick Flannery, with nightly gigs that also include an Argentinian tango band with Mariel Martinez, roots band I Draw Slow, local favourites Rattle the Boards with Des Dillon, Clonmel native Edel Meade and her quartet and many more.

This year’s comedy feature is the very popular Deirdre O’Kane, who returns to the circuit with a new show before its run at the Edinburgh Fringe Festival.

Adding to the festival surprises will be a new strand called Random Acts, devised and coordinated by Clonmel artists

Rachel Helena Walsh and Kate Twohig, who return to work with a group of young emerging artists, sharing their skills and enthusiasm and having fun. The Random Acts could take place anywhere - in your local supermarket, in the library, on the rooftops or in alley ways, so keep a look out.

All events are now on sale at www.junctionfestival.com. The Festival Box Office, which will be in Market Plac beside the Health Food Shop will open on June 20.

The Festival kicks off with a special lunchtime concert from Clonmel Blues band MOJO’d at the Main Guard today, Wednesday, June 3.