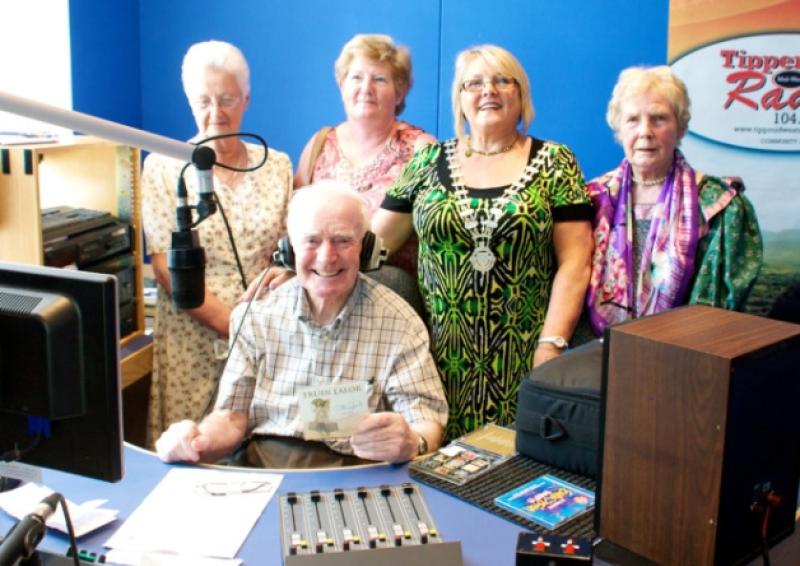 â€œI canâ€™t believe we actually got this far dealing with a listed building, grant applications and all that goes with,â€ said Ann Power, Station Manager. â€œSometimes we felt it might never happen but now here we are with lovely new studios and we are absolutely delighted.â€

Liam Aherne, Chairman of South Tipp Development Company extended his congratulations to Tipp Mid West Radio on the refurbishment of the new studios in the Community Services building.

â€œSouth Tipp Development has a long relationship with this community project starting with a grant of â‚¬29K in 2010 for studio equipment. The state of the art facilities that you see here today were made possible by a grant of â‚¬79K.

The new studios will present even more opportunities for local schools and organizations to become involved in media communications,â€ said Liam.

The official cutting of the ribbon was done by Minister of State Tom Hayes who spoke about the importance of local radio and also how Tipp Mid West was personal to him.

â€œOne of the many strengths of local radio is the way it translates a particular message out to the local community. It is important for older people who are isolated or in hospital to be able to hear what is happening locally, in the council chambers, for sport or just general news.

My late mother was always listening to Tipp Mid West radio and it kept her mind so active.

In fact, sometimes, after I was being interviewed on a certain subject and weâ€™d get into a hot discussion, sheâ€™d call me afterwards and say,

â€œYou went a bit too hard on that!â€ So today I am honoured to be asked to officially open the new studios and I wish them every success in the future,â€ said Minster Hayes.

Radio Presenter PJ Slattery was live on-air during the official launch and spoke to the Nationalist during an ad break. PJ has been with Tipp Mid West Radio since itâ€™s beginning 32 years ago.

â€œI think the secret of the stationâ€™s success is the dedication of the people who work here at the radio and above all the older community who listen in every day; it means so much to them,â€ said PJ.

General Manager of Tipp FM, Fran Curry and former presenter at Tipp Mid West radio Norman Morrissey were there in support of the official launch.

â€œItâ€™s a great day for Tipp Mid West,â€ said Fran who started his radio presenter career at the station. â€œI wish them continued success in the future.â€

After a blessing of the new building work by Fr. Mattie McGrath and Rev. Dean Knowles the crowds filtered upstairs to see the new studios and were treated to refreshments in the community centre.