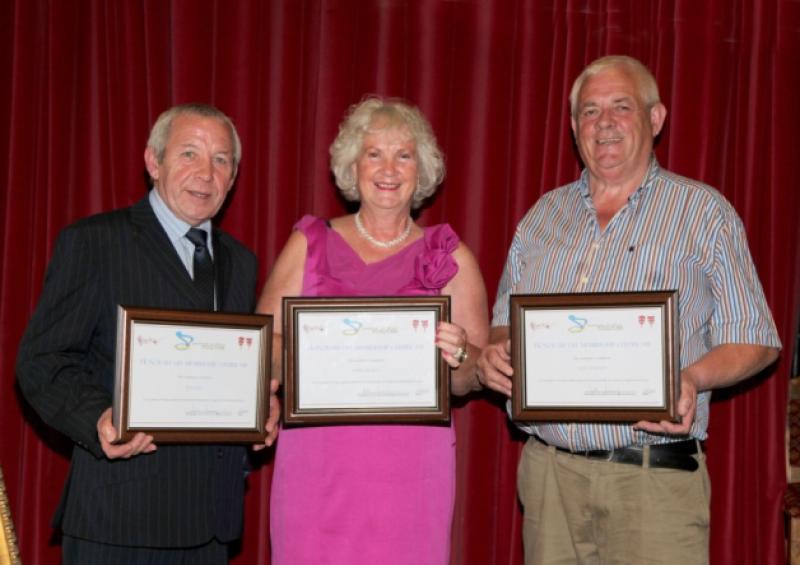 Honorary life membership has been bestowed on six Carrick-on-Suir Musical Society members in recognition of their many years of involvement with the Society on stage and back stage.

Honorary life membership has been bestowed on six Carrick-on-Suir Musical Society members in recognition of their many years of involvement with the Society on stage and back stage.

The honour has been has accorded to PJ Slater, Tom Oâ€™Dwyer, William and Phyllis Cooney, Mary Fox and Mary Hickey, who will enjoy free membership of the Musical Society for the rest of their lives.

Carrick-on-Suir Musical Society President Ann Lonergan presented honorary life membership certificates to several of the six members at the Societyâ€™s party in the Strand Theatre last Saturday to celebrate the success of its Evita production in the Association of Irish Musical Society awards.

Caolan Deehy-Power, the Musical Societyâ€™s PRO, said their new honorary life members were involved in the Society for decades and had made a huge contribution to its success.

PJ Slater has been a chorus cast member in many shows and pantos and helps out cleaning the Strand Theatre while Tom Oâ€™Dwyer is noted as a chorus singer with a big voice in Musical Society shows.

Mary Fox, meanwhile, was the Societyâ€™s props mistress for years and still helps out back stage with productions.

And Mary Hickey is another dedicated back stage volunteer, who has also appeared on stage in many Society shows as a chorus cast member.

Other Musical Society stalwarts honoured last Saturday night were Brendan Mulvaney and Anne Doherty, who recently celebrated their 84th and 80th birthdays respectively. Brendan was presented with a framed collage of photographs of his appearances on stage with the Society and a certificate. Anne, a former leading lady on stage, was unable to attend the ceremony and will be presented with collage of photographs and cert at a later date.