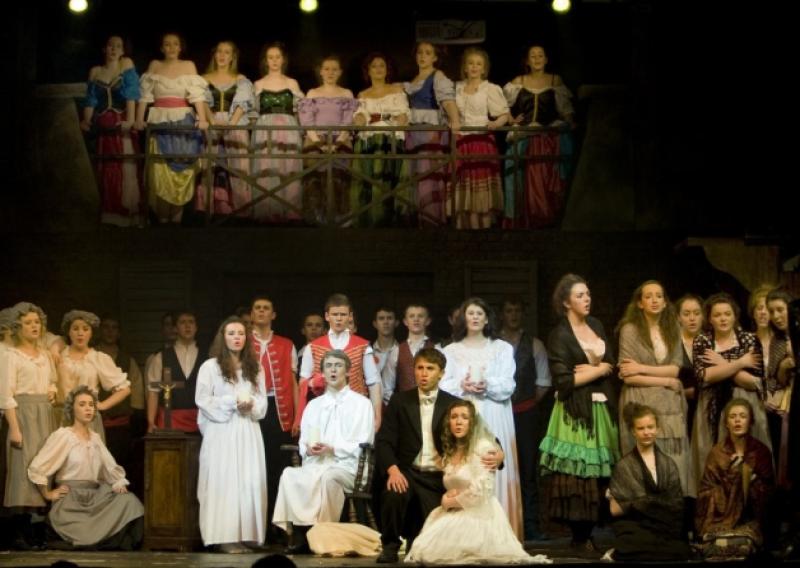 Back in 2007 when Les Miserable was first staged in Cashel Community School there were whispers that perhaps the producers were going a bridge to far. Those thoughts were of course unfounded as the show was an outstanding success.

Back in 2007 when Les Miserable was first staged in Cashel Community School there were whispers that perhaps the producers were going a bridge to far. Those thoughts were of course unfounded as the show was an outstanding success.

Six years on and the second coming was an even bigger triumph. This was the schools twentieth show and how the little acorn has grown since HMS Pinafore in Bru Boru in 1994.

Anyone lucky enough to get a ticket for their latest offering really saw a stellar production, patrons were treated to a musical and visual feast. Did we ever in our wildest imaginations back in the Old Town and Convent Hall days think that such a spectacular production could ever be staged in the town? The singing, acting, music, lighting, and that magnificent set were of such a high standard that it was hard to believe that one was sitting through a school musical and not a professional theatre production.

A quick head count of the cast photograph tells me that 68 students took part, pretty much all of them, resplendent in their period costumes, got some stage time in the opening scenes, so any hint of second night nerves are soon gone. There appears to be an endless supply of talent available for producer John Murray to choose from. Year in year out the faces change but the momentum moves relentlessly upwards.

The dark drama of the Victor Hugo classic was marvelously portrayed by the leads, but there were some great ensemble numbers which lighten the mood, too.

A bawdy rendition of ‘Master of the House’, led by the excellent James Downey (Thernardier) and his partner in crime the equally exquisite Agnes Lambe (Madame Thernardier) was one of the highlights of the first half.

Jean Valjean is at the heart of the entire story and Thomas Grogan’s towering performance was way beyond his years.

As to the music without it there would be no musical. Maestro Murray and his ‘Petite Bande’ back down on terra firma after a spell in the rafters weaved their magical sounds, the building blocks for the entire spectacle. Among the repertoire many now-classic songs including ‘Do you hear the people sing,’ ‘Master of the house’ and the unmistakable ‘I dreamed a dream’ and ‘Bring him home.”

Stars in their multitudes is what this show had in abundance, and what it deserved in a review is more than the five stars at my disposal.

The show was produced and directed by John Murray, assisted by Nicola Sheils, with choreography for the show was by Miriam Ball.