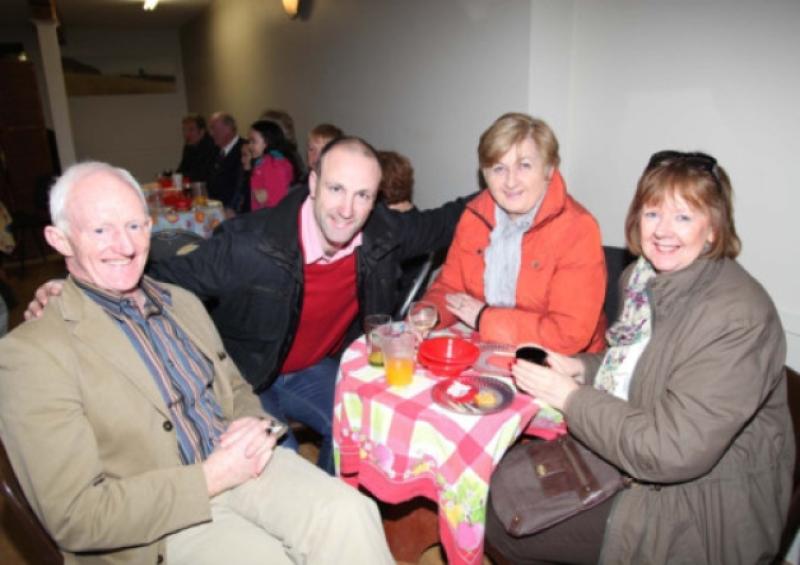 More than 50 art enthusiasts flocked to the theatre’s gallery for the fourth annual Art Benefit Party where the art work of 25 local artists, including eight newcomers to the event, were exhibited and up for sale for the bargain price of €20.

“Carrick-on-Suir’s Treasures” was the theme of the paintings showcased at the party and according Clancy Festival Art Trail Coordinator Linda Fahy all but three of the 38 paintings submitted for the fund-raiser were snapped up on the night.

As well as viewing and buying art,, visitors to the benefit night enjoyed live traditional music session performed by local musicians and contributed to the creation of a large art collage work.

A picture of the twin masks of comedy and tragedy that symbolise the creative arts were divided into a grid of 48 pieces and a piece of the collage along with colouring pencils and markers was given to Art Benefit Party visitors, who were asked to colour them in. The completed pieces were then gathered together to form the collage.

“We wanted to do something interactive during the party and it worked. We are going to frame the art work and it will be displayed at Brewery Lane,” said Linda.

She said the fund-raiser was a great success and has raised €700 for Art Trail programme initiatives. “Brewery Lane Theatre is a great venue and the party is a great showcase for the artists taking part in the Clancy Festival Art Trail. The party gets people interested and motivated about the Art Trail.

About €100 will be spent on commissioning an artist to paint a mural at Brewery Lane Theatre as a thank you for hosting the Art Benefit Party again this year. The remaining €600 will go directly to meeting the costs of the Festival’s Art Trail.

“We estimate we will have 36 new emerging and established artists exhibiting on the Trail again this year and we will also have the Carrick on Suir Camera Club exhibiting,” said Linda.

She also expects a further 30 new artists, who have never exhibited before, will showcase one piece of their art work each at an exhibition as part of the Trail’s open call initiative for new artists. Young artists from local primary and secondary schools will also exhibit their work in the Friary Community Gallery.

“The Clancy Festival Art Trail Artists thank everyone, who came along to support the Art Benefit Party, the Brewery Lane Theatre Group for hosting the event, the musicians for their outstanding performance and everyone who helped to make this event a success,” Linda added.

The deadline for artists to register to take part in the Arts Trail has been extended to Monday, April 15.