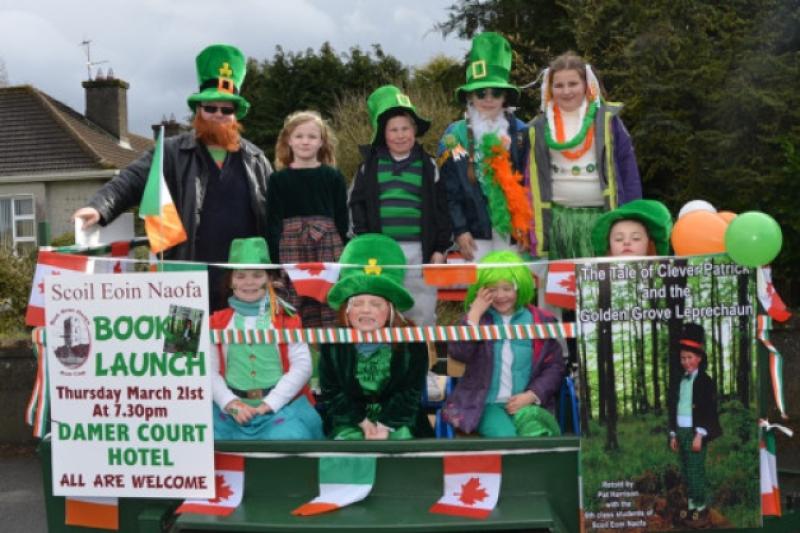 From the Ormond town of Nenagh, to Cashel of the Kings, from the Cathedral town of Thurles, to Roscrea, Littleton, Urlingford, and Templemore’s Wild Demesne, green was the colour of every baby’s bonnet and pint of Guinness. Sr Patricia Wall, ‘The flying Nun’ of Tipperary, was awarded the best float in Thurles and overall prize in Urlingford, while in Cashel a host of exciting floats and groups traded on horse jokes and papal elections. Larkspur Tennis Club’s “Pope Francis” (aka Tony Quinn) will be burned into the memory forever!

In Thurles, a brass band from Clonmel - Banna Chluian Meala - stole the show with their blue velvet jackets and co-ordinated dance movements in front of the judge’s podium. The rain stayed away for just long enough for Nenagh to celebrate St Patrick’s Day in fine style with a parade that took almost two hours to pass down Pearse Street. Pride of place at this year’s event went to the cross-border Friendship Band and the St Malachy’s Accordion Band from Kilcoo, County Down. The Friendship Band lived up to their name as they entertained the town on Saturday outside the Bank of Ireland and later that evening took part in Nenagh Choral Society’s gala event in Una Powells Pub.

Up to 4,000 braved the chilly conditions to be entertained by commercial floats and local voluntary and sports organisations, with close to 1,000 participants marching in the parade, the town’s fourth since it was relaunched by Cllr Hughie McGrath during his mayoralty. As usual, the parade was officially led by a colour party from the Defence Forces following a siren blaring cavalcade by North Tipperary emergency services. The emergency services’ 24/7 role was highlighted by parade MC Michelle Geraghty, who reminded the crowd that the reason they had to be first was because they were on call. The colour party was followed by a party of North Tipperary based members of the Organisation of Ex-Servicemen and Women before the Ormond Brass Band got the party going. Tipperary’s parades drew together a wide range of participants, and showcased the many local organisations that put in their time and effort to cater for a wide range of activities throughout the year.