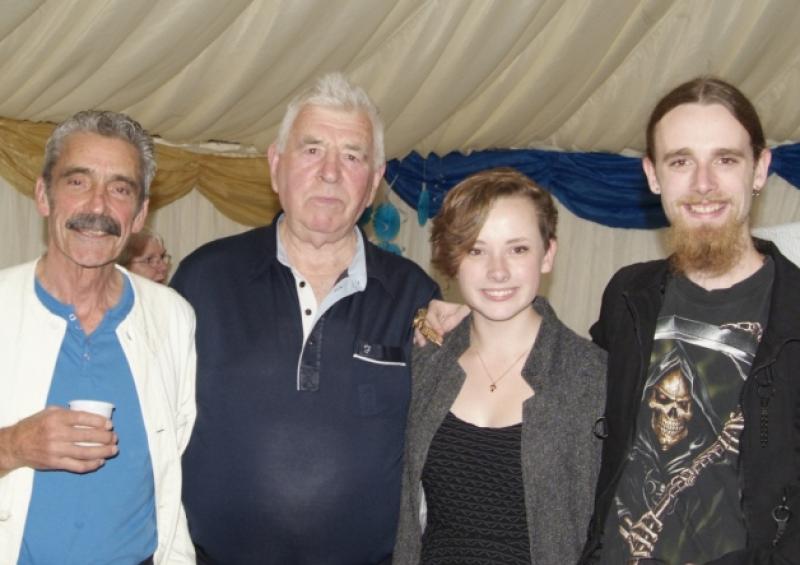 Terryglass paid homage to its own homegrown talent when its 15th annual arts festival opened this Wednesday with a concert by singer / songwriter Riona O Madagain and tenor Conor O’Meara. Earlier the audience was treated to a showing of Tony Donohgue’s award winning film Irish Folk Furniture.

Terryglass paid homage to its own homegrown talent when its 15th annual arts festival opened this Wednesday with a concert by singer / songwriter Riona O Madagain and tenor Conor O’Meara. Earlier the audience was treated to a showing of Tony Donohgue’s award winning film Irish Folk Furniture.

Riona, from Terryglass, has performed with Pauline Scanlon of Lumiere and Donagh Hennessy, ex-Lunasa, and is recording an EP. Conor, from Portumna, is a first-year student of music at DIT Conservatory of Music and a winner of the boy soprano category in Feis Ceoil na hEireann.

Meanwhile, Tony Donoghue’s animated film on the repair and recycling of furniture in rural Ireland, took top prize at the Sundance Film Festival in California and has been translated into numerous languages, inclding Hebrew. Tony, who is from nearby Ballinderry, is off to Albania next week for a showing of the movie, which has also been translated into that language.

He revealed that the festival spend amounted to an extra 45 per cent to all businesses in the immediate area.

The breakdown of visitors showed that 10 per cent came from overseas, 35 per cent came by boat to the lakeside village and 40 per cent were from outside the locality.

“All of this information, gathered locally, using approved research methods, underlines the significance of festivals to local communities and the local economy. It highlights the need for funders and sponsors to continue to invest in festivals which contribute so much to our localities and ultimately to our lives. The festival sector has a significant impact on the cultural, social and economic fabric of Ireland,” he said.

Mayor Darcy, who saluted the community for its vision in having the festival, said they consistently ran a top classs event, bringing national and international artists to the area.

Recalling that he had been on hand 15 years ago at the first festival, when they planted a sapling to mark the occasion, he said the festival had since established roots in the community that had “reached skywards in its ambition and organisation and has become embedded as an integral part of this community”.

“Strong leadership, the support of the community and audience satisfaction have sustained the festival. The 2013 festival brings magical work from further afield to North Tipperary in addition to confidently presenting new and celebrated talent from the area and in providing a platform for creativity. This festival knows its audience and is not afraid to consistently push the boundaries and strive for excellence in all it does,” he said.

Earlier, festival chair Valerie Cotter said the continuence of the event showed “what can be done in a hard working, small community”.

She thanked the committee for their input and, both she and Mayor Darcy urged people to look at the sponsorship board and to support the businesses that support the festival.

Ms Cotter also pointed out how some local people had grown up with the festival and revealed that when it first started Riona O Madagain and Conor O’Meara were too young to attend any of the children’s workshops.

This year’s event has the Irish premiere of Glasgow-based Sharmanka Kinetic Theatre’s Travelling Circus, which has been described as “mysterious and darkly humourous”. Other events include the Bee-Loud Glade musical cabaret tonight (Thursday), the return of Vladimir Jablokov with Vladimir’s Classical Twist on Friday; Ebony on Sunday afternoon, along with Gypsy blues group the Calvinists that same evening. Miriam Lambert Puppets will present Goldilocks and the Three Bears, also on Sunday, and there will be plenty of street entertainment along with the popular fireworks display on Terryglass Quay on Saturday night.

The festival has over 60 workshops as well as exhibitions. For details log on to www.terryglassartsfestival.ie