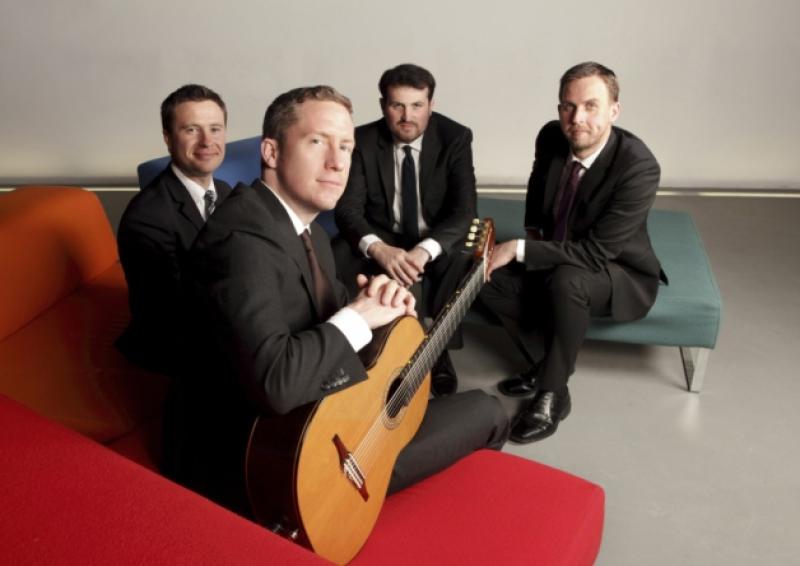 The Dublin Guitar Quartet will perform works by Philip Glass at the Nenagh Arts Centre on September 21st.

The Dublin Guitar Quartet will perform works by Philip Glass at the Nenagh Arts Centre on September 21st.

Described as “a quartet with a difference” by Michael Dervan (Irish Times) the Dublin Guitar Quartet are embarking on an Irish tour in September and are coming to Nenagh Arts Centre as part of that journey.

The group - Dubliners Brian Bolger, Pat Brunnock, David Creevy and Tomas O’Durcain - will playing their arrangements of Philip Glass’ string quartets, as well as music by Steve Reich, Arvo Part and Ligeti among others.

Recently returned from a successful four-city July tour for Colombia’s annual Guitar Week the DGQ perform exclusively contemporary music. Their concerts include a mix of celebrated works of the guitar quartet repertoire and modern classics by internationally acclaimed composers such as Steve Reich, Henryk Gorecki, Arvo Part and of course Philip Glass. They are also committed to performing new Irish works.

In July 2008 the quartet were honoured to share the stage with Philip Glass at a Louth Contemporary Music Society concert at St Patrick’s Cathederal, Dundalk. The quartet performed arrangements of two of Glass’s string quartets, Mishima and Company and were given a complimentary introduction by the composer himself. In 2010 the DGQ performed the entire set of Philip Glass quartets at St. Ann’s Church, Dawson Street.

Following this Irish Tour they will then begin a six-date tour of the US which will take in Washington DC, Orlando in Florida and a performance in the Lincoln Center’s Great Performers Series at the Walter Reade Theatre.

This is a great opportunity to see the group in the intimate venue of the Nenagh Arts Centre. Tickets are €12 and can be booked in advance online at www.nenagharts.com or from the centre in Banba Square, Nenagh – phone 067 34400. Some tickets will also be available on the night of the show which starts at 8pm on Saturday, September 21st,