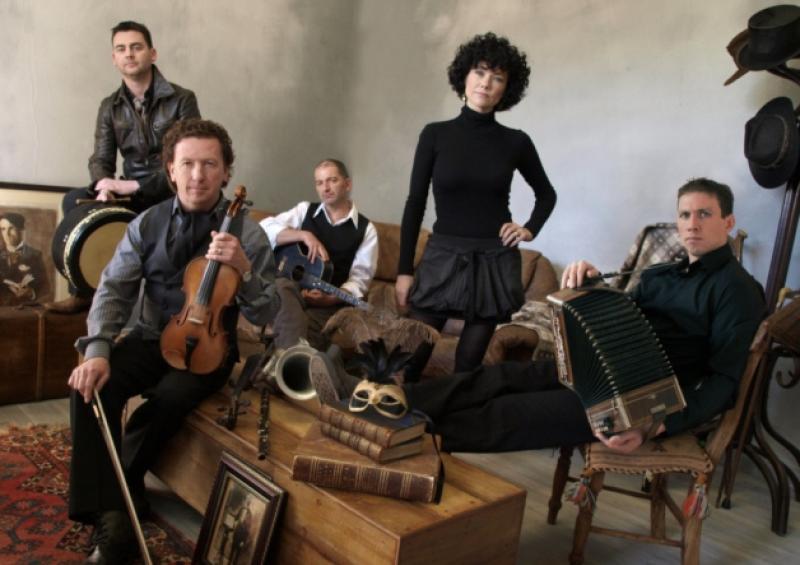 This version of the band is regarded as being the finest version of De Dannan ever; with Frankie Gavin on fiddle; vocalist Michelle Lally follows in the footsteps of all the Irish greats with De Dannan like Mary Black, Maura O Connell and Dolores Keane to name but a few.

Barry Brady, from County Roscommon, on accordion is a stylized performer. Barry brings a life to the music which lifts the spirit and gels with Frankie’s electrifying fiddling and between them they leave no stone unturned when it comes to exciting jigs reels and hornpipes. Double Bass player Paul O’Drisceoil, from Kinvara, brings a new dimension to the De Dannan sound. A superb bassist and a skilled jazz player and backing vocalist Paul offers another energy source to the band which lends itself to Irish, Jazz and maybe a touch of Bluegrass.

Colm O’Caoimh on guitar is from Kilkenny. Colm is unique in the sense of his understanding of musical accompaniment and the ability to play like he does. Colm, like Paul, Barry and Michelle, are at the highest performance level yet seen in Irish music - only what one has grown to expect from Frankie Gavin & De Dannan over the years. Visitors to the Nenagh show are in for a special treat.

Tickets are priced at €20 and can be purchased online at nenagharts.com or from the box office in Banba Square. The show takes place at the Nenagh Arts Centre on Saturday, November 16th (9pm).

Pat Shortt’s ‘I Am the Band’ features at Nenagh Arts Centre on Thursday, November 14th - admission is priced at €28 and tickets can be purchased online at www.nenagharts.com or from the box office in Banba Square. The show takes place at 8pm. This one-man comedy show charts the life of lounge musician Dixie Walsh (‘Jumbo Breakfast Roll’, ‘Where Did My Money Go’).