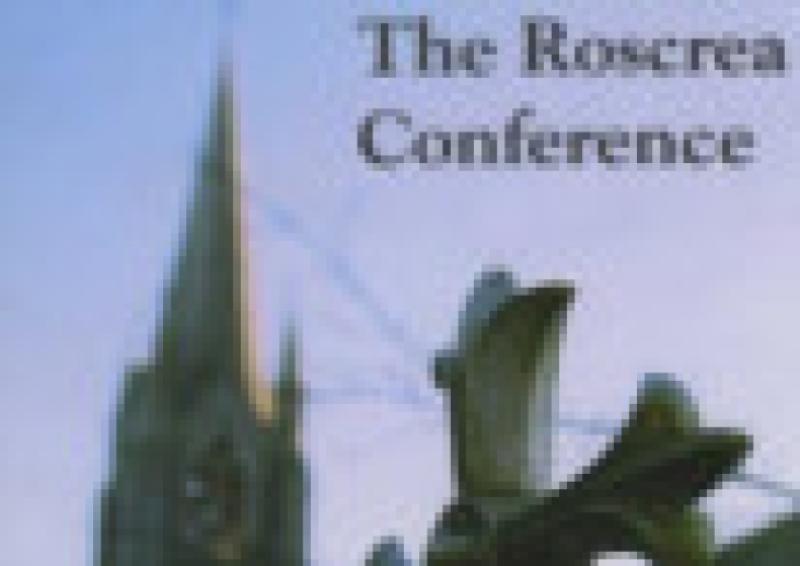 Hard to believe that the weekend after Easter will see the 56th consecutive conference held at Mt St Joseph Abbey, Roscrea.

Hard to believe that the weekend after Easter will see the 56th consecutive conference held at Mt St Joseph Abbey, Roscrea.

Both guesthouses are full but part attendance is still possible at all or any sessions. It has been a great year for the Roscrea Cistercians with two major sporting titles and the repatriation of an important Cistercian manuscript. The Roscrea Spring Conference, the 56th consecutive conference, takes place from Friday 10th

April — Sunday 12th April 2015 with the theme of The Céli Dé, adding another small chapter to an already significant year.

It all begins on Friday 10th April 2015 at 6pm with Snack supper and registration; followed at 6.30 with a reception hosted by Roscrea Heritage Society. At 7.25 Fáilte go

Mt St Joseph Abbey will be offered by Dom Richard Purcell, ocso, Abbot of Mt St Joseph . Three talks follow: 7.35 Sons of Life: the Community of St Máel Ruain of Tallaght - an introduction to the medieval Céli Dé by Dr Westley Follett, University of Southern Mississippi, USA; 8.10 Place-Names of the Céli Dé, especially looking at the wider context of the elements tamlachtae (Tallaght) and dísert (Disert Diarmata).by Dr Kay Muhr, Ulster Place-Name Society. At 8.40 Places of the Céli Dé will be given by Dr John Feehan, author and environmentalist. All this will be followed by discussion and ending with the famed Hospitium.

On Saturday the 10th of April at 3.45 am attendees are welcome to rise for vigils with the monastic community of MSJ. At 9.25am the first talk of the day will be delivered by Westley Follett entitled “The Tallaght Memoir: structure and source analysis”. The rest of the day will include “Southern bias in Tallaght texts’. Dr Padraig Ó Riain, Professor Emeritus UCC, The Céli Dé - Ascetics or Mystics; Sr Francisca /Dr Patricia Rumsey, Lecturer, SarumCollege, England, The Poems of Blathmac and the Céli Dé by Dr Brian Lambkin (Director, Mellon Centre for Migration Studies at the Ulster-American Folk Park, Tyrone) Concepts of Martyrdom and the Céli Dé by y An tOllamh Mairín Ní Dhonnchadha, NUI Galway Sacred and Profane Love- Friendship and Intimacy among the Céli Dé, By Exequiel Monge Allen, NUIG PhD student and Director of the Centre for Celtic, Anglo-Saxon and Norse Studies in Santiago de Chile. A Field trip to Lorrha facilitated by George Cunningham including a presentation entitled “The Stowe Missal and the Monastery of Lorrha by Brendan Coffey” OSB, prior of Glenstal Abbey.

That evening a reception will take place to honour the publications Four Tipperary Saints by Prof Pádraig Ó Riain (Four Courts Press), The Landscape of Clonmacnoise by Dr John Feehan (both books will be available at a conference price). After dinner light-hearted sessions will commence at 8pm with “Wish I had been present” where lecturers share a wish or a comment. This is followed by the conference director’s The Saturday Colophon, a journey into rare books.

On Sunday the 12th of April talks will be given by .Pádraig Ó Riain and Sr Francisca before breaking for High Mass at 10.30am. After Mass their will be further talks by Exequiel Monge Allen and Máirín Ní Dhonnchada entitled “Under the rule of the anmchara: soul-friendship and spiritual vigilance” and “Secular Friendship in Medieval Ireland”. At 12.25pm Brian Lambkin will speak about “The tears, blood, and sweat of the Céli Dé” and Kay Muhr will deliver a presentation on “Christianisation of the Irish Landscape through place-names”. Westley Follett will give the last presentation of the conference entitled “Researching the Céli Dé..the way ahead?” and as usual George Cunningham will deliver his summing up to end the conference at about 1.30pm before lunch.

The Roscrea conferences are run by Roscrea People in association with Roscrea Heritage Society. This conference on the Céli Dé is being run in association with ‘The Centre for Antique, Medieval and Pre-Modern Studies’ at NUI Galway with An tOllamh Máirín Ní Dhonnchadha acting as consulting director. Plans are already in place for the 57th

consecutive conference which will take place from Friday the 30th of October to Sunday the 1st of November 2015 with the theme “The World of Columbanus”.