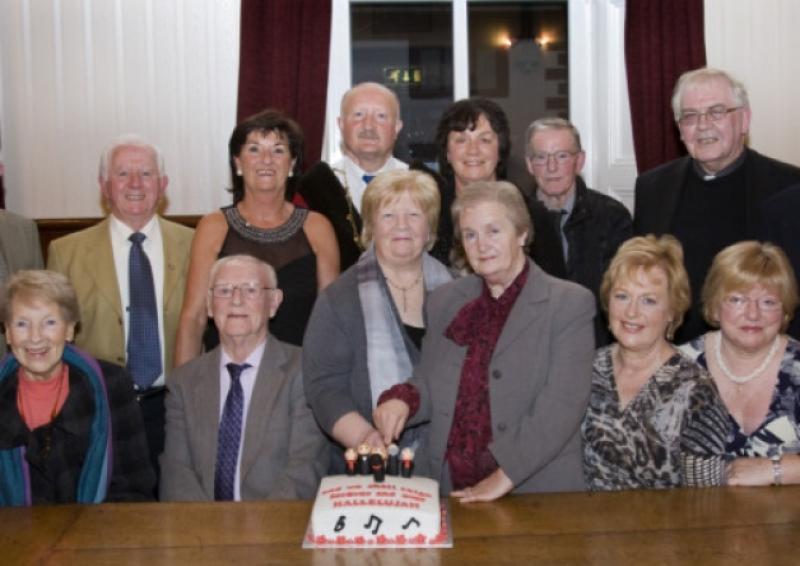 For the past 73 years St Mary’s Church Choir has played a very special part in the lives of the people of Irishtown and Clonmel, the Mayor, Cllr. Billy Shoer, stated when he hosted a reception for the choir at the Town Hall.

For the past 73 years St Mary’s Church Choir has played a very special part in the lives of the people of Irishtown and Clonmel, the Mayor, Cllr. Billy Shoer, stated when he hosted a reception for the choir at the Town Hall.

He said that the choir occupied a special place in people’s affections, whether at Sunday Mass, Confirmation or for a Funeral when, at a moment’s notice, the whole programme of Sunday music would be changed to make that Mass so important for the family of the deceased.

The Mayor said the choir made Christmas special for so many people, and in particular the large number of emigrants who return to Clonmel each year to hear carol singing on the streets, to attend the Christmas Eve Vigil Mass or Christmas Day Mass in St. Mary’s, reconnecting with old friends and recalling all those memories of growing up in Clonmel.

Tracing its history, Cllr. Shoer recalled that “in 1939 the choir started by chance, when on a summer evening Fr.Tom Smyth, Parish Priest of St. Mary’s, Irishtown was walking his dog up the Green when he heard a group of young men from the parish harmonising a song called Mother Kelly’s Door Step. He stopped and joined in with the singing and got a commitment from the group to come to the Temperance Hall in Irishtown, where a number of other interested young men came along to this first choir meeting.

Mrs. Philly Vaughan was then church organist and James A White the Professor of Music. They both accepted an invitation to become choir organist and choir master. During those early years it was mainly a men’s choir, with the women’s section joining in to sing at Christmas time. James A White continued to serve as choir master and later organist until his death in 1969.

The choir went through a lean period for the next 10 years until 1979 when a young Jane Kennedy took over as musical director, bringing with her a new energy and fresh outlook. 1981 saw the ladies section join the choir permenently and that allowed a four-part choir of soprano, alto, tenor and bass to be developed. Under Jane’s direction the choir went from strength to strength. She was greatly assisted by the late Mary Healy (wife of Seamus Healy TD) who was the organist and tutor from 1983 until 2001 when Mary sadly passed away”.

The Mayor thanked Jim O’Shea and sisters Mary Adamson, Eileen Murray, and many others who assisted the musical director, and who continued to play a major role in the life of the choir for the past 33 years.

“In June of 1989, at a special mass in St. Mary’s Irishtown, nine members of the choir received the Bene Merenti Medal awarded by the Pope for 50 years unbroken service. They were Paddy Condon, Tom Hogan, Jim Boles, Michael Farrell, Kevin Dennehy, Michael Donnelly O’Brien, Tom Morrissey, Dan Hogan and Dinny Farrell, and it’s great to see that one of those men is still with us. He’s Dinny Farrell, who is also honorary president of St. Mary’s Choral society at the grand old age of 90 years.

2003 also saw Jim O’Shea receive the Bene Merenti service medal while Eddie Cummins, who has surpassed the half century, awaits his service medal”.

Cllr. Shoer said the committee had been a vital part of the choir, organising and supporting the many events in which it was involved such as competing in choral festivals in New Ross, Cork and Wales. It had also performed with other choirs in Voices of the World in Dublin and South Africa;

appeared on RTE for the Easter Vigil ceremony in 1994 and on the BB Baskin show A Tribute to Frank Patterson; and produced a CD in 2000 of their best music to mark the Millennium, and that was played many times on Lyric FM’s Christmas Breakfast Show. The choir had also sung on many other national radio shows over the years.

“It a privilege to accord this reception and to honour all those members who have given up to 60 years loyal service not only to the choir but to St. Mary’s Parish and the town of Clonmel. Ye are a credit to our town and I wish ye every success for the future”.