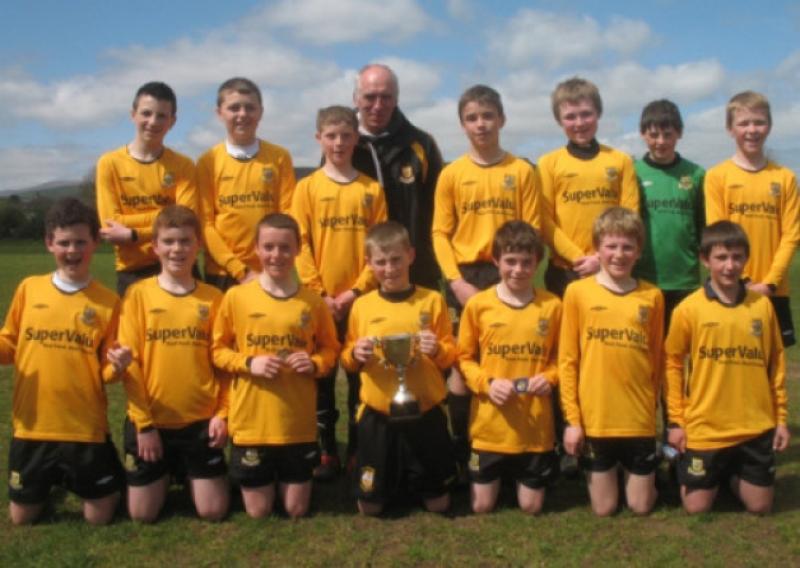 Congratulations to Clonmel Town’s U-13 A team that won away to a very strong Cahir Park side to seal the victory that has earned them the title of 2012/13 league champions.

Congratulations to Clonmel Town’s U-13 A team that won away to a very strong Cahir Park side to seal the victory that has earned them the title of 2012/13 league champions.

On the day it was a fitting goal from Luke O’Donnell to win the league with a 30 yard screamer to the top corner from a free kick. The goal was scored within the first couple of minutes but after that these boys showed why they were unbeaten in the league all season and why they deserve the title of champions with a very strong team performance that kept Cahir Park at bay for the whole game.

Cahir were also unbeaten going into the game held in the Duneske Centre and they needed to avoid defeat to keep their title hopes alive with a game against Peake Villa in hand.

It took a formidable team performance to hold out Cahir after taking an early lead.The centre half pairing of Diarmuid Mulcahy and Dara Murphy were rock solid, giving plenty of protection to goalie Brian Quirke, who pulled off an important save in the closing stages.John Furlong and Peter O’Dowd formed a great partnership up the left flank while midfielders Brian Lacey, Gavin Byrne and Sam Dwyer worked tirelessly to deprive Cahir of quality possession. Up front Jack O’Donnell and Sean O’Connor held up the ball well and were a constant counter attacking threat. Not used on the day were Jake Guinan, Mark Fannon, James Maunsell and David Jaros, who all played a crucial role in what has been a memorable season.

This season has proven to be a very tough campaign within a very strong league. Cahir Park were the reigning champions along with other strong opposition from long established clubs such as Peake Villa and St. Michaels. Clerihan, Bansha Celtic and Moyglass made up the league and each proved a tough challenge in their own right for the league champions. It is a huge credit to the boys that they finished the season after playing 12 league games with such strong statistics of having won 10, drew 2 and lost none. In doing so they scored 52 goals while only conceding 5 all season.

The squad received excellent coaching during the season from Paddy O’Donnell who was supported over the season by Adam McSharry and Eamon Lacey. It was a proud moment for Paddy as he has formally stepped aside after managing these boys since they first joined the Clonmel Town academy at the age of 6. It was a wonderful moment for the boys to send Paddy off as the manager of the league champions.

A long season that started in August 2012 came to a very joyous end and well done to all the boys for all their hard work over a long season.