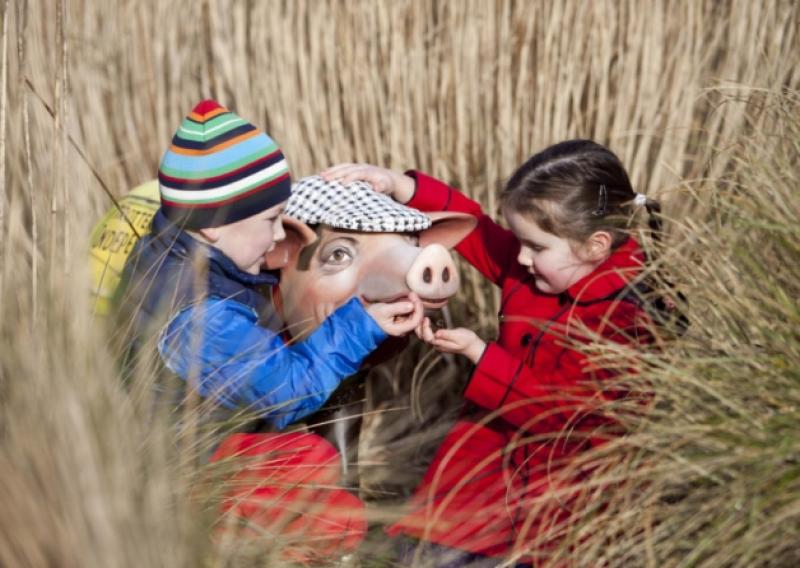 A unique “Pigs on Parade” art display has been launched with 100 pieces of pig art to find on the streets of Dublin throughout February and March in aid of the Jack & Jill Children’s Foundation who are hoping that funds raised will cushion the blow of a cut to its lotto funding.

A unique “Pigs on Parade” art display has been launched with 100 pieces of pig art to find on the streets of Dublin throughout February and March in aid of the Jack & Jill Children’s Foundation who are hoping that funds raised will cushion the blow of a cut to its lotto funding.

Central to this campaign is artist Maria O’Donovan from Tipperary.

Maria’s Inspiration for her pig “Bringing Home the Bacon” was sparked initially when researching an idea for the pig,

Maria was drawn to some old stories of bringing a pig or two home from the market, or bringing the sow to the boar at a neighbouring farm in a wheelbarrow and from here she was led to the Nursery Rhyme ‘To Market, To Market’.

This was a starting point to create a narrative piece incorporating the pig and a young boy made from mixed materials to create a visual accompaniment to the rhyme.

The pigs are available to be sponsored or purchased from www.pigsonparde.ie and the charity is inviting people to find the pigs, which are individually coded, and to enter a fun competition.

The hand crafted pigs are designed to become highly collectable and valuable works of art.

Jack & Jill have provided home nursing care for 43 local families with sick children in Tipperary since 1997.

Says CEO and founder of Jack & Jill Jonathan Irwin - “With less than 20% of our funding coming from the State and this recent, blunt cut in our Lotto funding from €75,000 to €30,000, we rely more than ever on creative fundraisers like this.

“We have supported over 1,800 children and their families across every community in Ireland with home nursing care and respite since 1997. A wonderful campaign like this means a lot to our families in terms of reminding them that there are artists out there, ready willing and able to use their skill to produce a wonderful parade of pig pieces of art like we have now, all in aid of Jack & Jill families.

“Pigs on Parade allows us to raise awareness and funds for Jack & Jill and have some great fun and appreciate some wonderful artwork in the parade.”

The Jack & Jill Foundation is a children’s charity set up by Jonathan Irwin and his wife, Senator Mary Ann O’Brien based on their own experience caring for their son Jack at home until he passed away in 1997, aged 22 months.