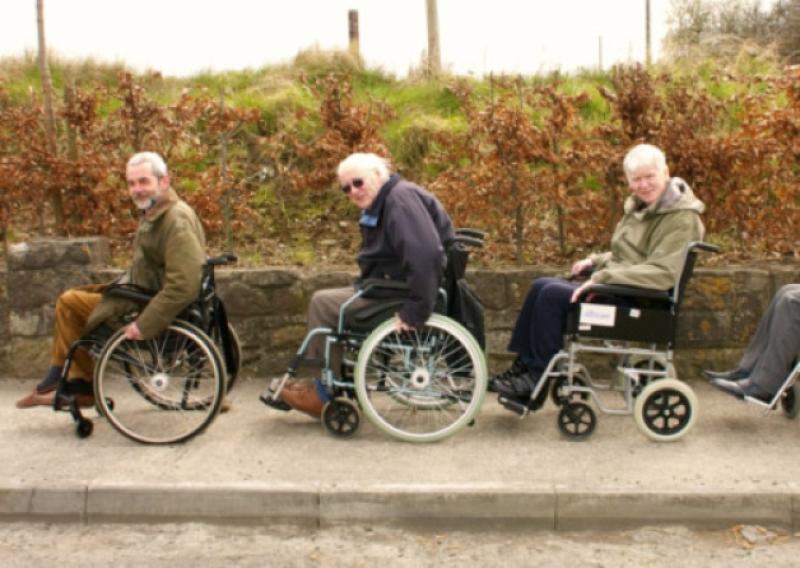 Over the past number of months various elected representatives and community members in each of the South Tipperary main towns have been highlighting the problem of dog fouling on streets and public parks.

Over the past number of months various elected representatives and community members in each of the South Tipperary main towns have been highlighting the problem of dog fouling on streets and public parks.

The HSE Tipperary Gold Star Initiative, working with people with disabilities, have a huge interest in increasing the public’s awareness of the impact of dog pooh for wheelchair users and just recently they partnered with the South Tipperary Development Company, (STDC), to do something about this issue on a practical basis.

For many years the issue of dog pooh and chewing gum on the streets have been highlighted by people with disabilities as a major problem.

Anne Bradshaw HSE, is spearheading the campaign for the Tipperary Goldstar Initiative. “We all know what it is like to accidentally step on dog pooh on the street and how disgusting it is - now imagine how it must be for a person who accidentally wheels through it. The person often ends up getting it on their hands as they try to push the wheelchair and also the rancid smell from the pooh remains embedded on the wheel tyres. Similar issues occur for people using an assistive white cane for visual impairment, they often push the end of the roller on the cane into dog pooh or chewing gum and when they fold their cane it ends up on their hands and clothes,” said Anne.

The HSE Tipperary Gold Star Initiative campaign received a very poignant quotation from a young girl in Cashel whose brother is a wheelchair user. Her experience captures the reality of the issue for the person with the disability and their families. “One of the worst things about using a wheelchair for my brother was when he would accidentally roll through dog pooh on the streets. The smell was rancid the whole way home until my mam would lift him out of the chair and then take off the wheels of his wheelchair to clean them. She would have to use a bucket, hot water and disinfectant and she had to scrape the dog pooh from between the crevices on the tyres…. I wish people would think of this before they would leave their dogs pooh when walking on community streets.”

The joint campaign between HSE Tipperary Goldstar and STDC is titled ‘My Litter, My Responsibility’ and aims to raise awareness about littering and most especially its impacts on people with disability.

“This needs to be something people think about and care enough about that they don’t do it,” said Anne Bradshaw. “We find that once people become aware of a situation and its impact that people think twice about their actions. The ultimate goal is, of course, a litter-free South Tipperary.”

Don Campbell, the Irish Wheelchair Association co-ordinator Tipperary Town branch was keen to point out the issue of dog owners not cleaning up their dog’s mess.

“The impact of dog owner’s not clearing up their dog pooh is very negative on wheelchair users as it’s going on the tyres of their wheelchair. The dog pooh then becomes a health hazard as it is going on their hands, into people’s homes and into shops resulting in health implications. Maybe dog owners allowing their dogs to defecate in the street think that someone will clean it up but that’s not a good thought process nor is it accepting responsibility for their actions,” said Mr. Campbell.

The HSE Tipperary Gold Star Initiative, in partnership with the Tina Mulhearne of the South Tipperary Development Company, asked young people in the schools to be part of creating the campaign that utilises social media, events and viral marketing to engage all citizens, especially children and young adults and increase awareness of the problem of litter in our community. This competition focuses on urging all children and young adults to help create a ‘Litter Awareness Campaign’ to be launched in South Tipperary during Spring Clean 2013.