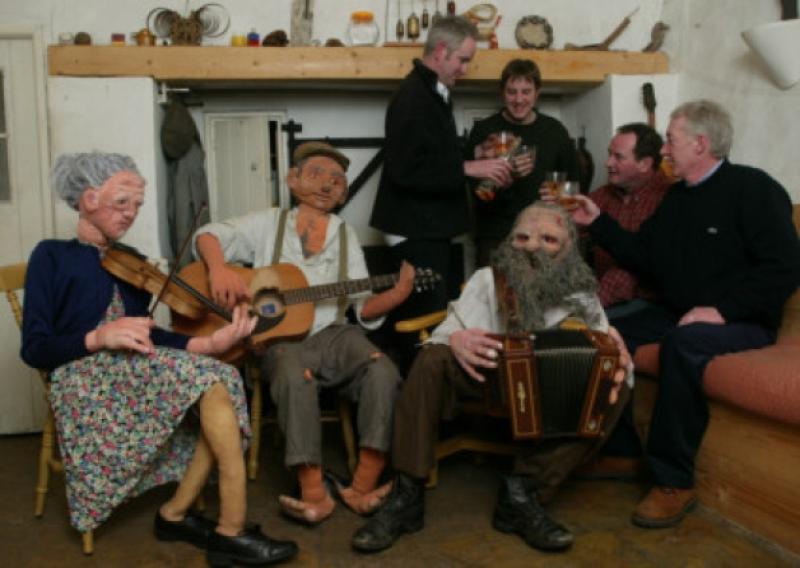 Teac a Bloc, featuring Des Dillon, trad band Rattle The Boards and a host of puppets created by artist Des, will be performed at Clonmel’s White Memorial Theatre for two nights only on Friday and Saturday, August 29 and 30.

Teac a Bloc is a production where visual Irish art and traditional music come together to create a humorous world filled with character and imagination.

The show was unleashed on an unsuspecting public for the first time at Clonmel’s Junction Festival in 2003. From there it took on a life of its own and was enjoyed by audiences up and down the country for the next four years, including an appearance on The Late Late Show.

It was performed as one of the fringe events at the Wexford Festival Opera; the Glor comedy, dance and drama festival in Ennis and also sold out five nights at the Town Hall Theatre in Galway, as well as being performed at several corporate events.

Audiances loved the combination of the music and the puppets, which included Peigi, an old woman who dances boisterously with Des Dillon, and a musically-talented baby.

“Benny McCarty convinced me to put the show on again just for the fun of it and to see is it still funny and enjoyable in 2014. If it is successful in Clonmel we might bring it to other theatres around the country”, Des explains.

Des, Benny, Pat Ryan and John Nugent, the other members of Rattle The Boards, have been rehearsing Teac a Bloc for the past month and tweaking aspects of the original production to improve upon the original.

Replicas of some of the puppets are on display in the window of Quirke’s pharmacy, which has recently returned to its original premises in Clonmel’s O’Connell Street.

There was a sneak preview of the show when Rattle The Boards performed at Liam Daly’s last Friday night during the Busking Festival, while Peigi and the Sharon Shannon puppets also made an appearance outside Premier Music on Saturday.

“We feel we’ve unfinished business with Teac a Bloc. We received standing ovations and sold out theatres wherever we brought it”, says Des, who has also toured the country with the Mag Mell show in the company of comedian and actor Jon Kenny.

Des and Rattle The Boards are looking forward to bringing Teac a Bloc back to the theatre. “It will look much better in the environment of a stage show, it’s almost like a a large 3D painting”, says Des.

Tickets for the shows - €10 for children and €15 for adults - are now on sale from Premier Music in O’Connell Street, Clonmel.