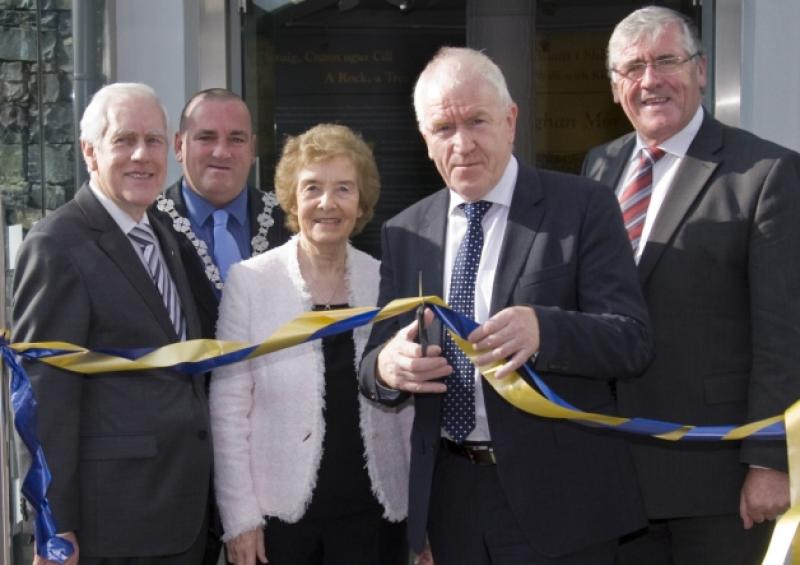 The contribution of Cashel’s Bru Boru to the cultural life of Ireland, projected at home and abroad, was praised at the opening of a new exhibition.

The contribution of Cashel’s Bru Boru to the cultural life of Ireland, projected at home and abroad, was praised at the opening of a new exhibition.

Minister for the Arts, Heritage and Gaeltacht, Jimmy Deenihan, officially opened the new ‘Sounds of History exhibition at the cultural centre, and said: “Brú Ború has made a significant cultural and tourism contribution to Ireland. Their performances abroad have gained significant positive publicity for the country. The group has performed at the World Expos in Japan, China and Spain; for the Sultan of Oman when they accompanied President Mary McAleese; Africa and several other locations”.

In addition to the Sounds of History, the Minister also unveiled a bronze sculpture of the 1916 leaders by sculptor Rory Breslin. Director of Brú Ború, Una Ó Murchú, paid tribute to the Minister and thanked the Department for its support.

Brú Ború is an affiliate of Comhaltas Ceoltóirí Éireann. In addition to its cultural centre at the foot of the Rock of Cashel, it also has a performing group which has won high acclaim nationally and internationally. At home, the group performed at several of the European Presidency events in Dublin. The centre in Cashel has become a cultural mecca for people from all over the world.

The Sounds of History exhibition at the centre covers the golden age, conflict and then renewal. It houses one of the largest collections of ancient Irish musical instruments. The centre has raised significant funding towards the cost of the project. It has been generously grant-aided by the Department of Arts, Heritage and Gaeltacht.

Volunteerism plays a huge role in Brú Ború reflecting the community importance of the centre. This gives all the participants a sense of ownership in the cultural and tourism potential of this unique development in the shadow of one of the most revered and famous historic monuments in Europe.