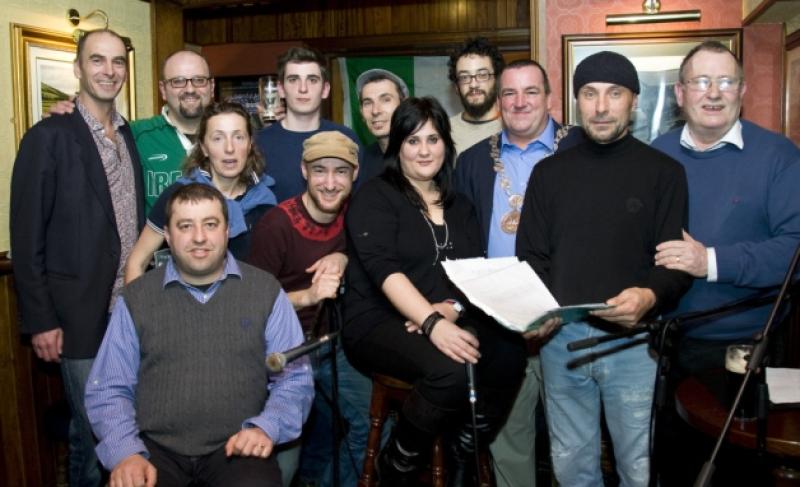 As Cashel seeks participants to represent Ireland to the EU Charter 2014, 13 members from Bucine, Italy, arrived in Cashel for a special visit.

As Cashel seeks participants to represent Ireland to the EU Charter 2014, 13 members from Bucine, Italy, arrived in Cashel for a special visit.

The delegation led by Mayor Sauro Testi received a formal welcome to Cashel by Vice Mayor Martin Browne and Councillor Eddie Bennett in Foleys Bar last Friday. The reception was kindly catered for by Massimo Mazzola and Seamus Foley.

Seven members of the delegation, including Mayor Sauro Testi comprised an Italian Folk Band called Celso. The group played for nearly four hours led by the vibrant vocals of Lisa Milaneschi. Their performance drew in a packed house, which created a highlight of the visit for both the visitors and Cashel people. The Italian lyrics proved no barrier to the venue being rocked for the night. The overwhelming success of the performance was aided with hosting by Foley’s Bar and the generous loan of musical instruments by Sean Feery, Daragh Hill, James McGrath, Séan Laffey and Alan Devitt. The Italians’ performance was preceded by their arrival the previous day and a welcome extended by Cllrs Eoghan Lawrence and PJ Quinlan, a heritage tour of both Cashel and the Rock. A further tour of Cahir Castle and the Glen of Aherlow finalised the Italian’s brief visit to Ireland.

Cashel is now preparing for three European Charter Meetings in 2014 and is currently seeking names of participants from across Cashel and South Tipperary who are interested in representing Cashel and Ireland to the European Charter. The Meetings start with a Youth Meeting (18 to 27 age group) from 27th to 30th of March in Bienvenida, Spain, with Youth Delegates attending from ten countries; then an Adult Meeting from 8th to 11th May in Stary Poddvorov (Czech Republic); followed by a joint Adult and Youth Delegation to the main Annual Meeting from 10th to 14th July in Bievre and the beautiful Ardennes in Belgium. Contact Communications Officer, Niall Gregory (086 4096899, nialltgregory@gmail.com) as soon as possible as places are limited.