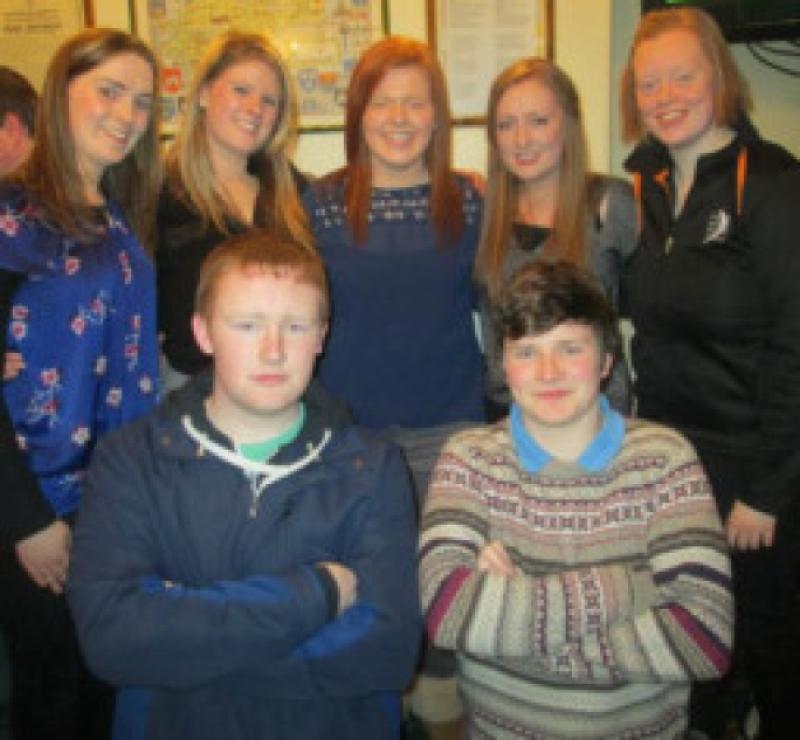 The musicians known to all in Huddersfield as the ‘Shannon Ceili Band’ are all members of Ceoltoiri na Sionainne, the Comhaltas Munster youth group. Each year the parade committee in Huddersfield bring two Irish bands/ groups to perform and in their 10th anniversary year the Shannon Ceili Band were thrilled to be selected for this momentous year in the parade’s history. The weekend began with a session in the Irish centre on Friday night, followed by rigorous rehearsals and sound checks on Saturday before a gala concert in the Irish centre accompanied by the Tulla Pipe Band. The pipe band opened the concert with a half hour display, which was followed by a seventy five minute performance from the ‘Shannon Ceili Band’ all of whom are multi-instrumentalists. The line up included Geraldine O’Meara (Toomevara) on flute and whistle,

Shauna Bourke (Templetuohy) Banjo, Diarmuid Ryan (Roscrea) on drums and button accordion, Sarah Mc Auliffe (Newport) on concertina and Denise Kennedy (Ballina) on piano and flute. The group also had Cillian Roche (Templemore) on Uilleann Pipes, Whistle and Saxophone. Cillian was applauded by all in Huddersfield for his performance on the bagpipes, loaned to him by the Tulla Pipe Band major, Patrick Murphy. Cillian’s understanding of the pipe band tradition, due to his membership of the Thomas McDonagh pipe band, was beneficial in breaking the ice between both Irish groups and as a result the groups have forged a great bond. The pipe band’s youngest member Aoibh O’Reilly joined the Ceoltoiri na Sionainne members for a beautiful rendition of Siul a’ Ruin. The group first heard Aoibh sing on the bus to Huddersfield and were so taken with her rare talent that they insisted she join them for their performance.