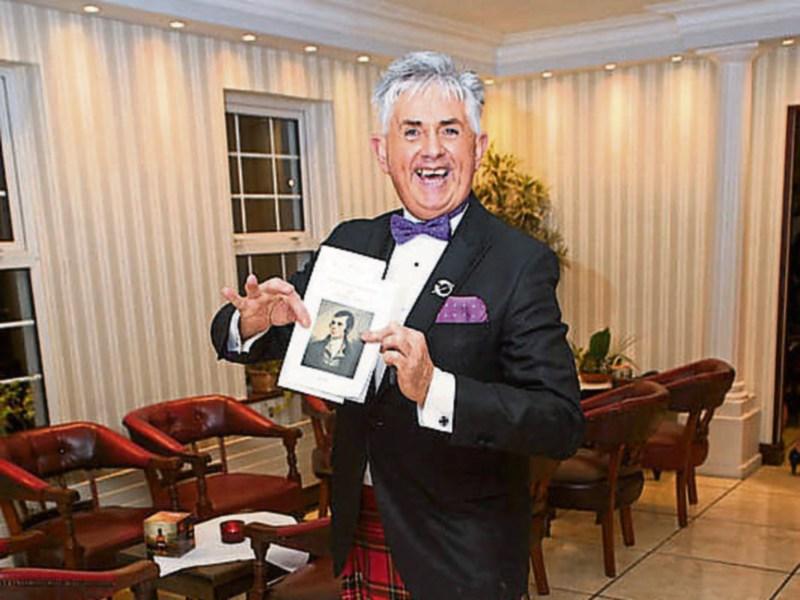 Men in kilts, a toast to the Haggis and a traditional Scottish Ceilidh are among the highlights of the 2016 ‘Burns Weekend’ which takes place at Harvey’s Point, Donegal on Friday 29th and Saturday 30th January 2016.

The annual ‘Burns Supper’ at the award-winning Donegal hotel supports the Donegal and North West Hospice and is hugely popular in an area that has strong links to the Scottish poet.

Robert Burns (1759 - 1796) wrote over 300 songs and a variety of poems during his short life, which will be celebrated with music, song, poetry and oratory as well as a banquet featuring the traditional Scottish festive dish of haggis, ‘tatties and neeps’ (potatoes and turnips).

The idea for the Harvey’s Point Burns Supper came from the late Joe McGlone, father of Deirdre, a man who, like Burns loved and lived life to the full. Over the past 14 years, the team at Harvey’s Point have been greatly assisted by adopted son of Donegal and native of Scotland, Richard Hurst who has an encyclopaedic knowledge of the life of Burns.

The weekend begins with a Ceilidh in the Ballroom on Friday followed by an informal sing a long in Harvey’s Bar on Friday evening. Guests are invited to join in with their favourite Scottish party-piece. It promises to be a lively event with some surprise guest appearances.

On Saturday afternoon, there will be the traditional Scottish dancing and poetry workshops. Hosted by Richard Hurst and well-known journalist and presenter, Frank Galligan, these are fun ‘warm-ups’. Everyone is welcome.

The skirl of bagpipes will greet guests on arrival at the Burns Supper when they will be welcomed by the Gysling family with a traditional Scottish hot toddy. Chairman Richard Hurst will begin celebrations with the ‘Piping in’ of the haggis to the lavish banquet, where the Selkirk Grace will be recited. A five course meal will be served in the hotel’s Gourmet Suite overlooking Lough Eske. The haggis will be accompanied by a ‘dram’ of Scotch whisky.

A highlight of the evening is the ‘Address and Toast to the Haggis’. As one guest remarked at last year’s event: ‘If the idea of raising your glass to a sheep's stomach filled with meat is confusing, it all makes sense once you've had a few glasses of Scotch whisky’. The ‘Toast to the Lassies’ and the ‘Reply from the Lassies’ will be performed by special guests as part of the formalities.

Entertainment includes poetry, song and dance - some of Burns’ most famous songs and poems will be recited, then guests are invited to take to the floor for Scottish ceilidh dancing including favourites the ‘Gay Gordon’s’.

Guests are encouraged to dress in the traditional tartan of Scotland and while kilts for the men are optional, they are worn by many. There is a prize for the best dressed Lady and Gentleman.