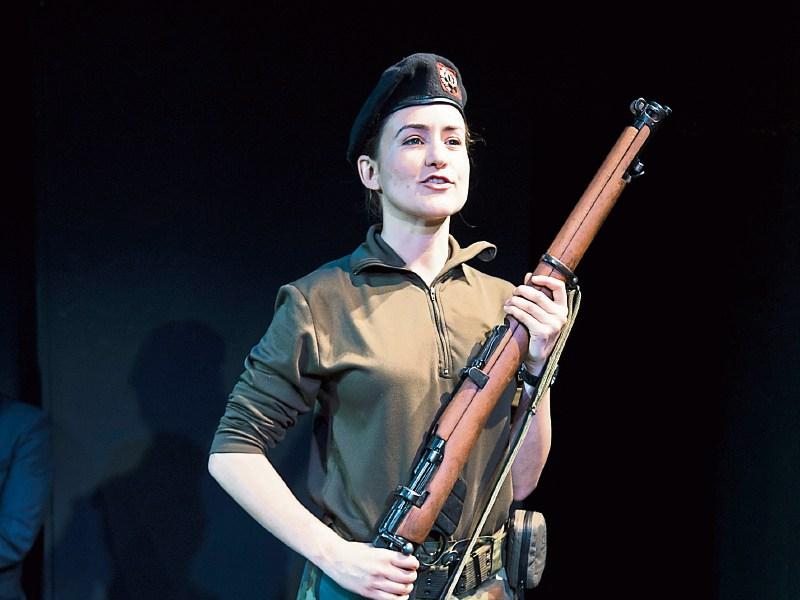 Amy O’Dwyer returns to her home turf for one night with 'Lockdown' a new play about the State’s commemoration of the 1916-2016 centenary which has been written by Dublin playwright Gerard Humphreys.

Amy credits the Ursuline Convent as playing a major part in her love for the arts - Amy took part in many school productions as well being a member of the Thurles-based youth theatre group Phoenix Productions.

Having graduated with distinction from the London School of Musical Theatre, Amy also received a BA in Drama and Theatre Studies from Trinity College Dublin and attended an advanced performance year at The Gaiety School.

Amy is back after five years in London and looking forward to playing at The Source Arts Centre.

Director Anthony Fox wanted to ensure that Amy was authentic as Captain O'Farrell. So, 'Full Metal Jacket' film stunt man Sean Nimna was brought on board to teach Amy about army rifle drills. Running 10k with a rifle and a full rucksack is all part of being a soldier - this was no problem for Amy O'Dwyer as she competes in 26-mile marathons. Amy has also set up a theatre company entitled Trees Road Productions.

'Lockdown' is a satirical comedy and tells the story of Clodagh O'Farrell, a senior captain from army HQ recently returned from the Lebanon who attempts to coordinate the military aspect of the celebration with leadership and clarity despite the objections and undermining forces of her greedy and corrupt government-appointed colleagues.

'Lockdown' features at The Source Arts Centre in Thurles on Friday, February 5th (8pm). For all bookings and enquiries please call the vox office on 0504 90204 (Tuesday to Friday 10am to 5pm & Saturday 2-5pm) or book online at www.thesourceartscentre.ie.

The 'Life of Illusion' magic show is set to cast a spell on The Source Arts Centre on Sunday, February 7th. Tipperary audiences should prepare to be tricked, wowed and amazed with the forthcoming performance of Ed Masters’ 'Life of Illusion' - this is a thrilling and family-friendly show.

Embarking on a national tour the Tyrone-born Ed Masters will conjure marvel, mystery and magic into the minds and imaginations of theatre-goers of all ages. Prepare to be astounded by baffling disappearances, gravity-eluding levitations and jaw-dropping escapes. You will not have witnessed a show of this kind up this close and personal before!

As a proud member of the iconic Magic Circle, Masters shares the stage with his dazzling dance troupe and bewitching birds. Fusing impossible stage illusions, breath-taking sleight of hand and state-of-the-art magic 'Life of Illusion' reinvents an age-old art form proving that the magic is really back.

You can take a sneak peek at what to expect from 'Life of Illusion' in the trailer on www.edmastersmagic.com.

This is a mind-blowingly amazing show for all the family (from age five plus).

To book your tickets please contact the box office on 0504 90204 or alternatively visit thesoureartscentre.ie

the queen of ireland

'The Queen of Ireland' is coming to The Source Arts Centre in Thurles on Wednesday, January 20th at 8pm. The screening of 'The Queen of Ireland' documentary will also feature an informal Q&A with Rory O’Neill (aka Panti Bliss), director Conor Horgan and producer Ailish Bracken (from Nenagh).

'The Queen of Ireland' is a documentary film which follows Rory’s journey from the small Mayo town of Ballinrobe to striding the world stage.

For all bookings and enquiries please call the box office on 0504 90204 or visit www.thesourceartscentre.ie.