Lifetime of service to Irish culture 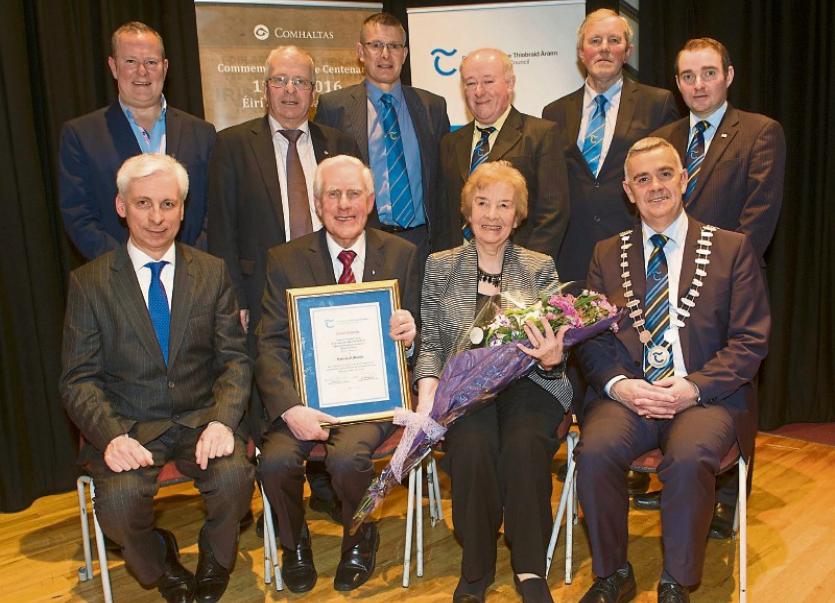 The highest civic honour that the county of Tipperary can bestow has been conferred on Senator Labhrás O' Murchú for a lifetime dedicated to the promotion and development of Irish culture.

To be honoured “under his own roof” and by his own people represented one of the highlights of a distinguished career as a politician and as one of the leading visionaries in the country of the promotion of Irish music, language, song and dance.

It was the first civic honour to be accorded to an individual by Tipperary County Council and the ceremony was conducted at the Bru Boru centre last Friday evening.

Glowing tributes were paid to Senator O Murchu and his wife Una whose powerful partnership had overseen the establishment of the Bru Boru heritage centre in Cashel and its successful development as a major tourist attraction and a cultural beacon at home and abroad.

The tributes were led by County Council Chairman Seamus Hanafin who said civic receptions were not lightly granted and were only awarded in recognition of the most significant achievement and the fact that it was now an all Tipperary Council made the honour all the more special.

The council chairman said there was no more appropriate place than Bru Boru, a place that was testament to the determination and energy of Labhras and Una O Murchu, to recognise their exemplary achievements.

He said the hallmark of his stewardship as Ardstiurthoir of Comhaltas Ceoltori Eireann had been innovation, inclusion and excellence.

Cllr. Hanafin said Senator O Murchu throughout his career had shown a tremendous ability to work with others and to extend the hand of friendship.

"There was no better example of that than the role he played in bringing Fleadh Cheoil na hEireann to Derry in 2013 which made a major contribution to building bridges between the different communities”.

The chairman applauded the success of Bru Boru and the role it has played in promoting Irish culture and tourism performing worldwide for Irish Embassies. This included representing Ireland at four World Expos and accompanying President Mary McAleese to perform for the Sultan of Oman.

“Throughout his life he has always remained a proud Tipperary man and his native county is proud of him - he is a credit to Tipperary,” said Chairman Hanafin proposing the motion to accord a civic reception to Senator O Murchu.

The proposal was seconded by Cllr. John Fahey and unanimously approved by the members of the county council.

Accepting the award, Senator O Murchu told the invited guests that no words could express the heartfelt appreciation he had for the members of the council for bestowing such a signal honour on him.

Reflecting on what he described as a “very lucky journey” Una and himself had undertaken, Senator O'Murchu said that one of the great motivating emotions in life was a pride and love of native county.

That great sense of pride and love was experienced, he said, through the admiration of sports people and their exploits, the achievements of young people, the appreciation for those who sacrificed their all for no personal gain so that future generations could have independence and control of their own destiny, through the work of the farming community as they nurtured the land that was dearly fought for and for business people who strive to provide employment at home.

Senator O Murchu said all that sense of community that he spoke about was encapsulated by Charles J Kickham in 'Knocknagow'.

Kickham, he said, spoke about the spirit of the people, and the message the writer and patriot wished people to embrace was that unless we had our freedom and our independence all the other dreams and all the other aspirations could not follow.

Senator O Murchu hoped that message would not be forgotten during the centenary celebrations to mark 1916.

He said the family was the bedrock of our society and that it was important that legislators, community activists and communities bear that in mind and ensure that the family is nurtured and respected.

Huge challenges had to be faced, insisted Senator O Murchu.

Hundreds and thousands of young people had to emigrate and “no parent wanted that for their children”.

Senator o Murchu said himself and Una had met “the finest of people” on their journey.

He praised the massive contribution of others thanking members of the Comhaltas family, staff of Bru Boru and their friends .