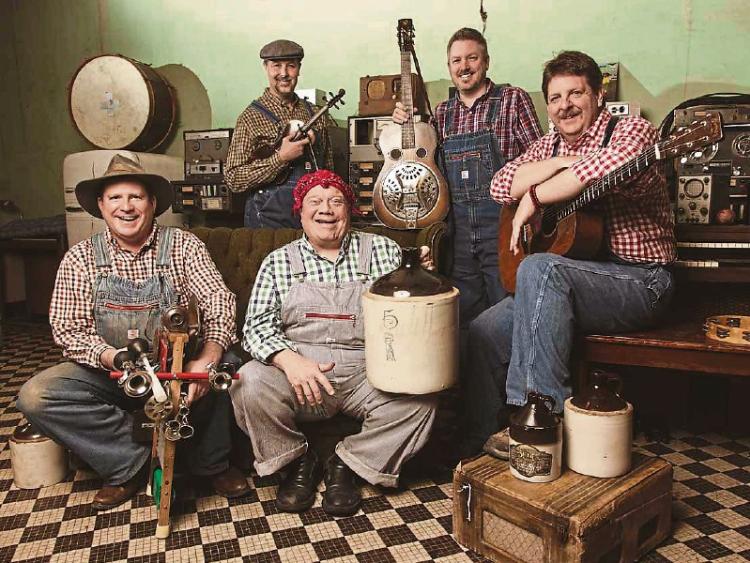 Clonmel World Music returns with The Tennessee Mafia Jug Band to play the Raheen House Hotel next Thursday November 10 in their last show of 2016.  It’s a welcome return to Tipperary for the four Nashville musicians who previously played a sold out concert in Clonmel back in July 2011.

Hailing from the farming town of Goodlettsville, north of Nashville and home to the father of bluegrass Bill Monroe, this Tennessee four piece band brighten up the stage with rib-tickling Old-Time tunes and great banter. As well as collecting fans with their Americana sound, the boys have also carved out a name for themselves in fashion circles for their trademark dungarees (and corny jokes!) The Tennessee Mafia Jug Band prides itself on hot picking, powerful harmony singing and riotous hijinks.

The group released their fifth album, Lester’s Loafin’ Lounge, in July 2015 marking the band’s first album since founding member Lester Armistead passed away from cancer, aged 71, in May 2014.

Lester was with the band on their 2011 visit to Clonmel World Music and Gerry Lawless has fond memories of Lesters Jug playing, great humour and high tenor harmonies on that night.

“We are dedicating this final 2016 show to Lesters memory”, says Gerry. Lester’s Loafin’ Lounge is a real place, located on the Armistead property in Goodlettsville, Tennessee. It has played host to many “pickin’ parties”, Opry stars, movie stars and even rock stars.

The Tennessee Mafia Jug Band have appeared at the famous Ryman Auditorium, at New York’s Carnegie Hall, at Washington, D.C.’s Kennedy Center, at the famous Station Inn Nashville and at numerous other venues in the US and Europe, playing boisterous songs like “Too Old to Cut the Mustard,” “What a Waste of Good Corn Liquor” and “Slide Them Jugs Down the Mountain.” They have also played on many occasions at The Grand Ole Opry as special guests of Marty Stuart, who is a big fan.

In addition to appearing regularly on Marty Stuart's TV show, the band received the Trailblazer award at Uncle Dave Macon Days Festival. The award is given to artists for their contributions to old time music and for the preservation of traditional music.