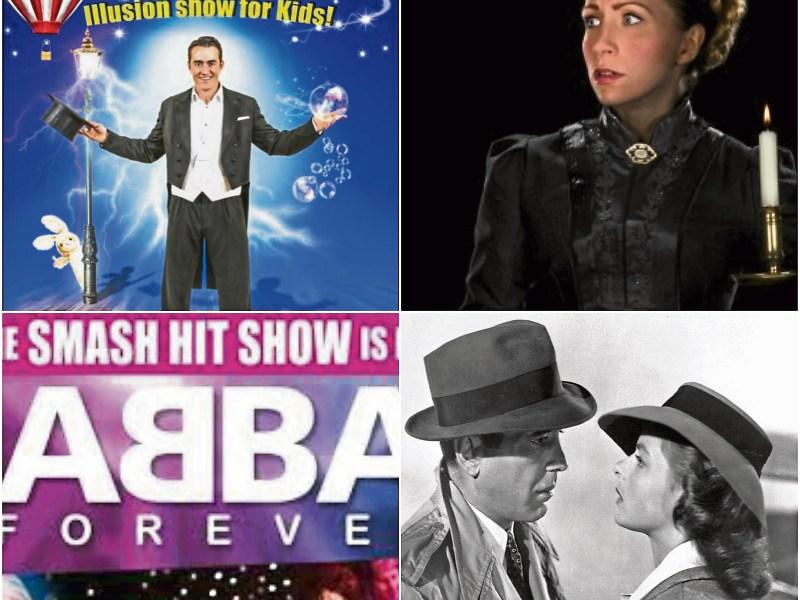 Christmas Gothic at the Source

Dyad Productions will present the spine tingling ‘Christmas Gothic’ at the Source Arts Centre Thurles tonight at 8pm. While Christmas is a time for remembering the past, a time of feasts and festivities; of holly and mistletoe; it is also a time of visits and visitations. Come in from the cold and enter into the Christmas spirit as a dark and spectral woman tells haunting tales of the festive season, lighting a candle to the frailties of human nature and illuminating the cold and chilling depths of the bleak, wintry dark. Tickets cost €15 and are available now.

Abba Forever – The Christmas Show plays the Brú Ború Theatre on Saturday 26th November. It’s always party time when abba are about, but when it’s the Christmas Show, then that’s a real excuse for a party! This happy sing-a-long tribute, celebrates with a loud and proud fanfare!It’s the perfect way to start your Christmas celebrations!

A cracker of a show. Great Vocals from the girls, Lucinda and Marie, great playing from the guys, Denis and Rae and terrific audio visuals to bring you back in time and share seminal ABBA moments with you!

From “Waterloo (Again)” to “Dancing Queen” expect a dazzling, fantastic performance including the most iconic hits, Mamma Mia, S.O.S, Money, Money Money, The Winner Takes All, Gimme Gimme, Gimme and many MANY more! Every favourite is here. The finest ABBA voices you will ever hear! Get your glad rags on, brush up on the lyrics and come to the best party in town! You’ll be rockin’ in the isles!!! Saturday, 26th November 2016 at 8pm

Surprise your little ones with the world of magic at the FANTASMAGORICAL show at Nenagh Arts Centre this Sunday. Magician Joe is a professional full time magician for the last 12 years having fallen in love with magic at the age of six when he saw magician Paul Daniels perform on a family holiday. From then on he was hooked!! Joe has appeared twice on the Late Late Show, Six One News, Ireland Am, Xpose. He also appeared for two sell out runs in the Abbey Theatre and a following summer run in London's West End playing the role of a magician. This magic show is suitable for ages 3 year olds to 12 year olds. Sunday 27th November, 3pm, single tickets €10/Family of 4 €35

Casablanca at the Source Film Club

Focussing on themes of lost love, honour and self-sacrifice in an exotic wartime setting, Humphrey Bogart is the cynical nightclub owner in Casablanca who has a fateful meeting with the lover, Ilsa (Ingrid Bergan), he left behind in Paris. She is now married to a French Resistance fighter who is hunted by the Nazis, and Bogart has to decide whether or not to help the couple escape to freedom. Casablanca must have appeared romantic and nostalgic even in 1942 and now seems like a timeless classic about the triumph of civilised values in a cruel world. Tickets cost €9/ 5 and film begins at 8pm.

In this adaptation of the novel "The Price of Salt" by Patricia Highsmith, Therese (Rooney Mara), a young department-store clerk in 1950s Manhattan, meets Carol (Cate Blanchett), a beautiful older woman stuck in a depressing marriage of convenience. As their bond deepens and they become romantically involved, Carol finds the strength to leave her husband (Kyle Chandler).  Thursday 1st December, 8pm, Tickets €5