THE OYSTER, THE TIPPLAND, THE ARCADIA, THE OISIN?

Recently while putting together a story about Fethard Ballroom and the plans of the local hall committee for major renovations of the premises I ended up taking a detour back to the 1960s and the “Dance Hall Days” in Tipperary.

The said Fethard hall started life in January 1946 not as a ballroom but rather as the Capitol Cinema. In 1967 it was officially opened as the Capitol Ballroom.

Later still in 1993, having been closed for many years, the ballroom was saved from falling into disrepair when a local committee took control of it again, and in some shape or form, it has been in operation since.

To suss out what the entertainment scene was like back then curiosity led to an old copy of ‘The Nationalist’ from the period - July 1965. Looking at it, it was hard to credit, in 2020, how incredibly popular dance halls and indeed cinemas were 55 years ago.

Surprisingly there were no less than seven cinemas in operation in South Tipperary at the time. 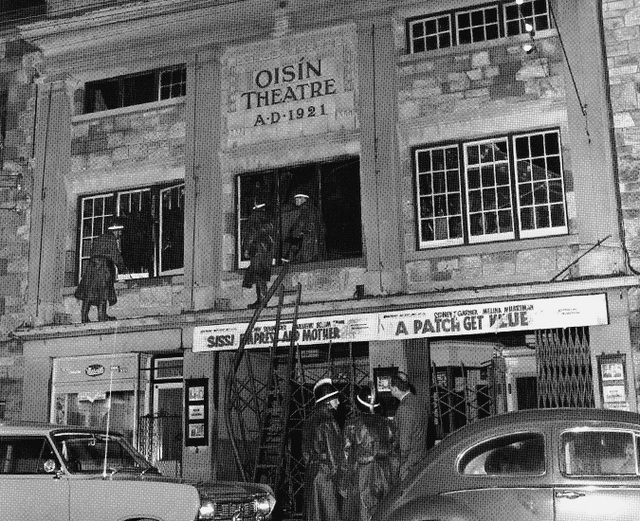 The Oisin - Clonmel's Intimate Cinema - was burned to the ground in December 1966. On that O'Connell Street site today is Heatons Department Store.

In Clonmel you had two - the Oisin in O’Connell Street, and the Ritz  in Parnell Street.

Tipperary Town also had their own two, the Excel Cinema and the Gaeity Cinema.

Elsewhere there was the Rock Cinema in Cashel; the Capitol in Cahir, and, of course, as mentioned above Fethard had the Capitol cinema.

The Oisin Theatre in Clonmel (on the site of Heatons in O’Connell Street) was opened in 1921 as a live theatre before being converted into a cinema in 1939, the year World War II began. Sadly the cinema was destroyed by fire just before Christmas in 1966. For pub quiz fans - the last film shown there was “A Patch of Blue” starring Sidney Poitier.

The Ritz Super Cinema in Clonmel opened in March 1940 and sadly closed in September 1976. The last movie shown in this cinema was “The Big Country” starring Gregory Peck. Today, of course, the former Ritz cinema site is occupied by Clonmel Credit Union.

At that time in the 1970s the Regal Theatre was the only cinema in Clonmel, located where Larry O’Keeffe now has his furniture store. It too subsequently closed as a cinema some years ago.

If cinemas seemed aplenty back in 1965, the region was awash with dance halls, according to the Entertainment Pages in ‘The Nationalist’. That Bank Holiday August weekend in 1965 there were no less than a dozen choices for the dance halls and even more options when taking into account marquees and field evenings and other such events.

The vast majority of the dance halls are now sadly silent with just one or two still operating as more general public halls.

The trip down memory lane went something like this... 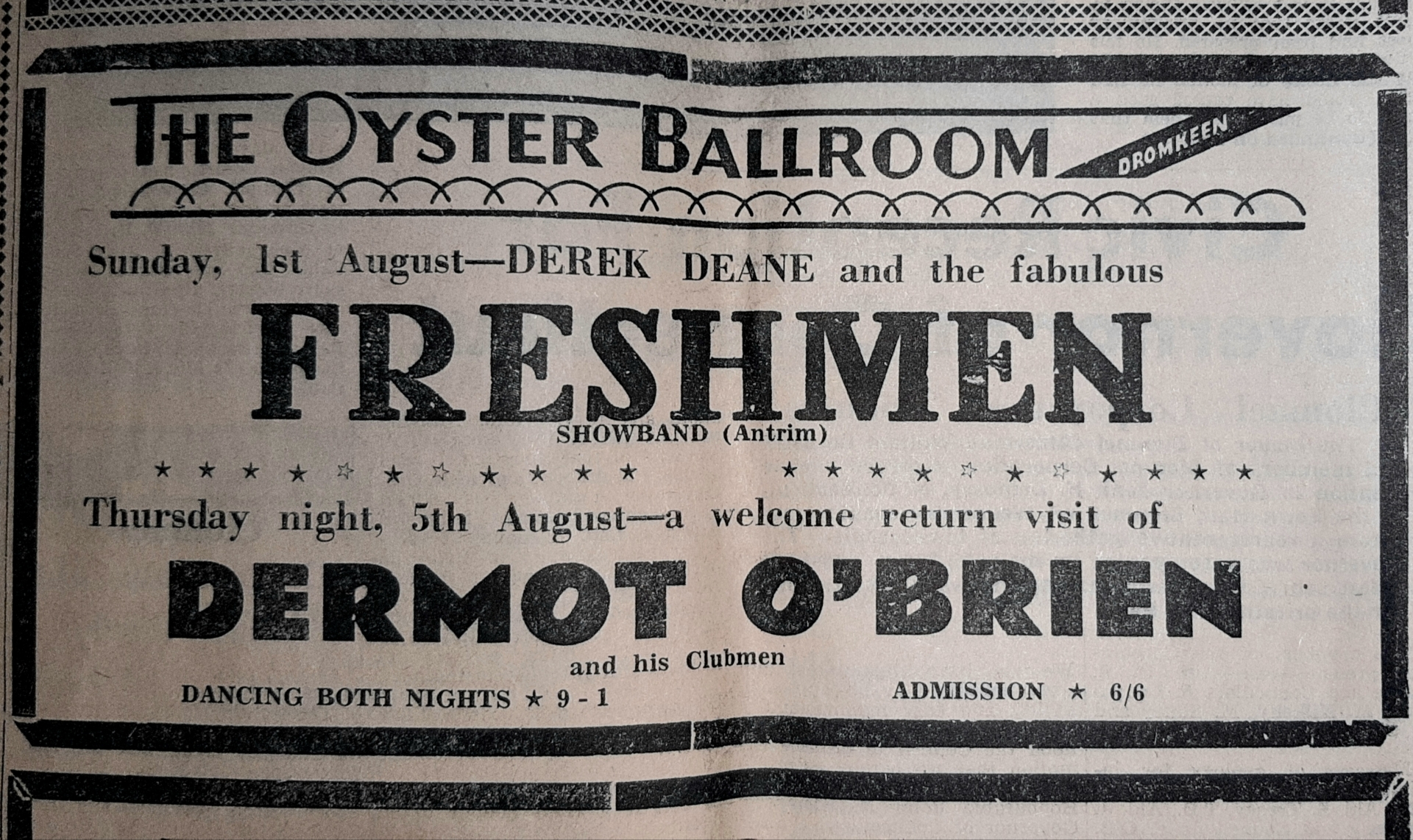 The Oyster Ballroom Advert in 'The Nationalist' in July 1965.

The Oyster Ballroom in Dromkeen had ‘The Freshmen’ and ‘Dermot O’Brien’ on Sunday, August 1 and Dermot O’Brien was to make a welcome return visit on the following Thursday night.

In Clonmel the Collins Hall also had no less than three gigs that week. On the Sunday night Earl Jordan and the Caroline Showband took the stage with dancing from 9-2 for the admission price of 7/6. (If born post 1971, ask your parents to explain what 7/6 was). On the Bank Holiday Monday ‘Derek Joy and the Joys’ were there and the following Thursday, August 5 ‘Kelly and the Nevada Showband’ were blasting it out in Market Street.

The Tippland Ballroom in Cashel hosted ‘The Altonaires’ on Sunday night, August 1. According to their advertisement that week the coming attractions to the Tippland included: Mr. Acker Bilk and his Jazz Band, The Mighty Avons, The Drifters, The Hoedowners and The Miami.

In the Tower Ballroom in Tipperary on the Bank Holiday Monday ‘The Magnificent Seven’ from Derry no less were playing and the following Thursday night Earl Jordan and the Caroline Showband were dancing from 9 pm till 1 am.

The Flamingo Ballroom in Clonmel (located at the top of Gladstone Street) had a ballad session on Friday, July 30 with Bobbie and Peg Clancy along with Southern Folk Folk and Bennie Colfor. Local musician Billy Fennessy was booked in the two gigs over the weekend also. 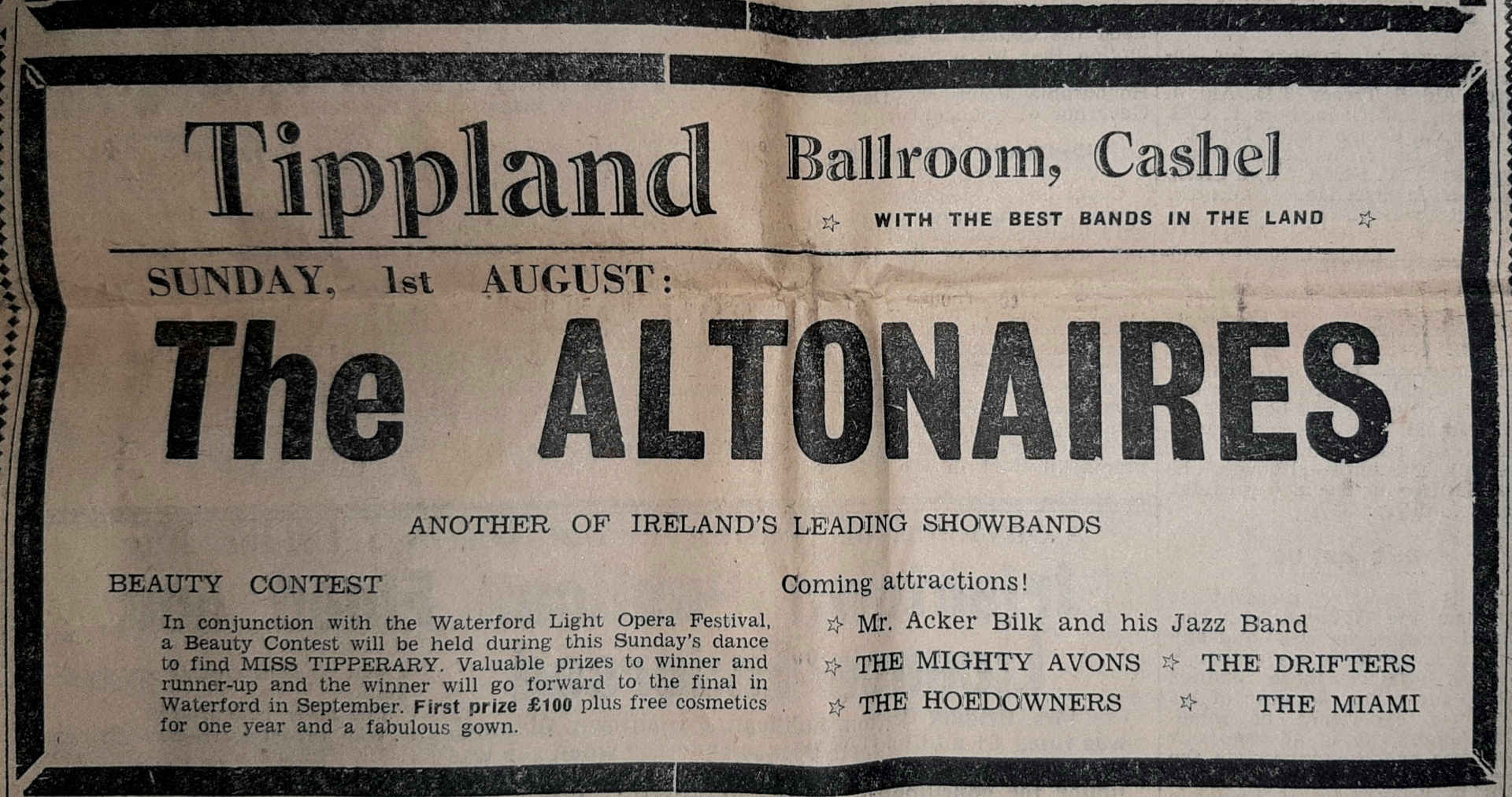 The Tippland Ballroom Cashel Advert in 'The Nationalist' in July 1965.

LIMERICK, CORK AND WATERFORD TOO

On the Bank Holiday Sunday in the Mayflower in Mitchelstown ‘The Southlanders Showband’ were playing.

Over in “The Staro” in Cappamore the Donal Ring Ceili Band were booked in for Sunday night with Jackie Hearst coming the following week.

And there was yet another ballroom in Tallow (near Lismore) called the Arch Ballroom where ‘The Nomads’ from Kilkenny were booked in for Friday, August 6.

No less than Roy Orbison was playing on Sunday night, August 1 in the Olympia in Waterford according to the advert in ‘The Nationalist’.  “The Big O” as he was known was being supported by Art Supple and Pat McGueegan (who packed a big punch!). The Hoedowners played the Olympia on the Friday night.

Staying down that general direction, The Atlantic in Tramore were advertising five consecutive nights of dancing with the likes of ‘The Airchords’, ‘The Atlantic Showband,’ ‘The Millionaires’, ‘The Great Young Shadows,’ ‘The Pacific’ on stage for those gigs. ‘Butch and the Capitol’ were booked in for the following weekend.

Back in County Tipperary, The Premier Ballroom in Thurles had three nights of dancing lined up in early August with Earl Gill and the Hoedowners (featuring Sean Dunphy), ‘The Greenbeats’ and ‘The Chessmen’ all featuring.

Back in the 1960s Cahir had its very own ballroom also, The Arcadia where ‘Dickie Rock and the Miami’ were due to play on Wednesday night, August 4 with dancing from 9-1 for an admission price of 7/6. ‘Houston Wells and Premier Aces’ were in Cahir on the Bank Holiday Sunday night. 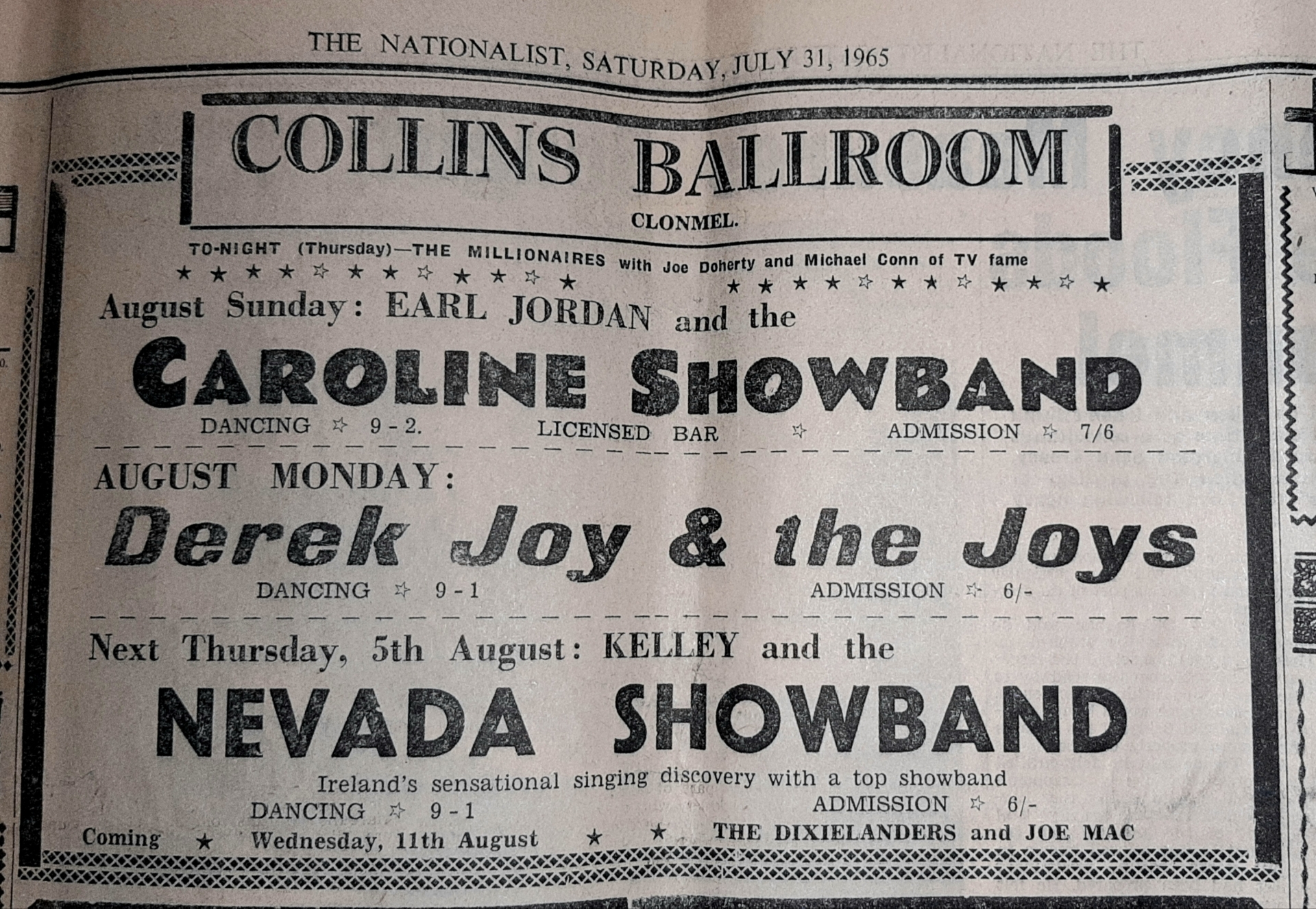 The Collins Hall Ballroom, Clonmel, Advert in 'The Nationalist' in July 1965.

AND BESIDES THE DANCE HALLS

As popular as they were then, the ballrooms of County Tipperary weren’t the only place to go dancing in that era.

There was also a Bank Holiday Weekend Marquee in Bansha where among other things they had a “Heat of Miss World” taking place.

There was dancing too in the Coursing Club Hall in Galbally with a group called ‘Gallowglass’ providing the music.

In Killenaule on the August Bank Holiday of 1965 there was a Field Evening planned, and across a few more fields in the nearby Moyglass Hall a Ceili and Old Time night was on offer.

In Carrick-on-Suir, Castleview Lawn Tennis Club were hosting a Dance with ‘The Atlantis Showband’ booked in.

Drangan Badminton Club also had a dance that weekend with the well-known Pat McNamara Band from Clonmel providing the music.

And in another blast from the past, the now long-gone Ormonde Hotel in Gladstone Street, Clonmel, was also staging Holiday Weekend Dancing with Rathkeevan Macra na Feirme.

Finally, that very busy Bank Holiday Weekend the Ballyporeen and Araglen Fianna Fáil Cumann were holding a dance and among those attending, according to the advertisement would be Deputies Davern, Fahey and Senator Ryan.