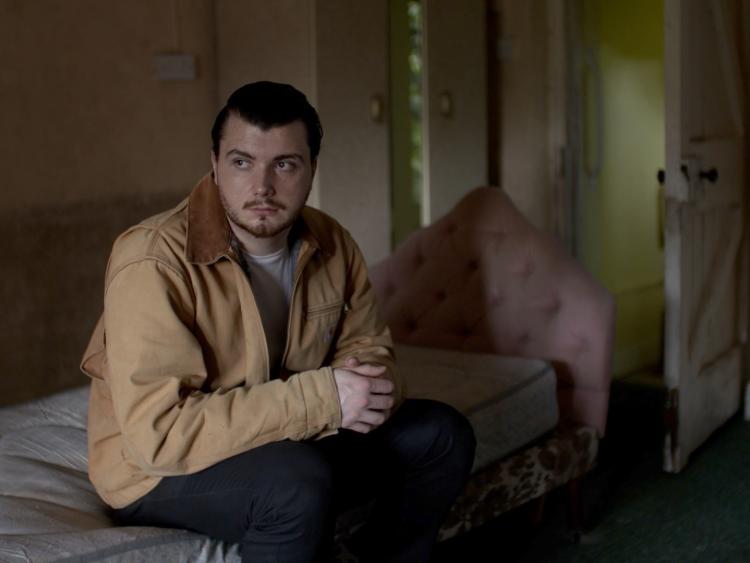 Eddie McCormack filming in the Stannix Homes Thurles in September

Tipperary based songwriter Bright Falls has dropped his latest single and music video shot entirely in the historic Stannix Homes in Thurles.

The video was filmed over three days by Thurles videographers Dom Coleman and Ben Walsh in the historic buildings which Bright Falls singer Eddie McCormack describes as a surreal experience.

“To actually film in the building which gets referenced in the song itself was surreal, looked pretty killer in the end,” he says.

The song was originally penned in September 2018 however it underwent several rewrites before making its way into the recording studio earlier this year.

Here is the official music video for ‘The Widows Homes’.
Happy Halloween https://t.co/YHWPzxT45r

“The Widows Homes is a song that came together through a lot of work, re-writes and editing. The chorus was the first thing written and it was in a completely different song. That was in September 2018, I really liked the chord progression of that chorus and the line itself 'I'd lay that old hourglass on its side so time stands still', but I didn't like the rest of what I had written at that time.

“A month later I wrote the first version of 'The Widows Homes', I had decided then that I wanted to craft this story of a divorce and I was always obsessed with this Pete Wentz lyric "Wouldn't you rather be a widow than a divorcee?", which got me thinking about this character who though now divorced feels as if they had lost so much they might as well be widowed. I ended up completely rewriting the verses in March 2019 and was happy enough with it to go record last march in JAM studios in Kells Co. Meath with Martin Quinn,” he adds.

Bright Falls originally started as a solo project by guitarist and singer/ songwriter Eddie McCormack in 2014, however expanded to a rotating full band line-up in 2018. Eddie and co have since played support to a number of national bands such as The Frank and Walters and Ryan Sheridan.

However, the Covid pandemic also put a halt to their biggest show to date which had been scheduled for The Source last April as well as the annual Feile Beag festival which Eddie picks out as a highlight to play for all local artists.

“But with all that was cancelled what I really miss the most is our local singer-songwriter night in Thurles every month, Whistle This, which is run by the legendary Tom Lyons,” he admits.

“I actually got to play a show supporting David Keenan at The Source Arts Centre in September where there was reduced capacity and social distancing measures were taken. It seemed to work quite well, I don't know whether that would translate as well with a full band gig, but it's still better than nothing and will probably be something we may see more of in Spring of next year,” he adds.

With many acts now deciding to stream live music events, Eddie says musicians must place increased emphasis on the visual element to their performance.

“I purchased tickets for three streamed shows by a band called Underoath and I watched a live stream from Code Orange and I was blown away by those performances. But those live streams had all these visual elements and unique camera work, which is something quite different to a live performance. There was a narrative, a purpose. It wasn't just a band standing on a stage performing their songs to an empty room with a one camera set up.”