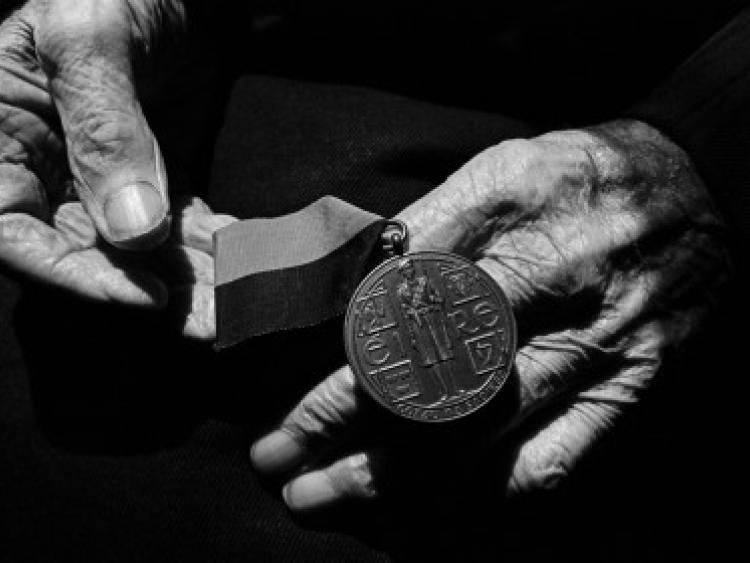 In 1998 photographer Seamus Murphy travelled throughout Ireland taking photographs of the veterans of the Irish War of Independence. These men, and one woman, were photographed candidly in their homes and parishes or in formal shots.

Their bearing still proud, with some holding memorabilia from the period, the images provide a visual record of a seminal group from a generation that have since passed on.

He caught them at the very end, the youngest was 97, the eldest was a Tipperary man at 105. Often ignored, officially at times buried, they all but disappeared in the passage of time.

On the 100th anniversary of the war begun in Tipperary that resulted in the formation of the Republic, Murphy has added a set of photographs that document a beginning.

For this exhibition at The Source Arts Centre, he has photographed new members of the Irish community who had to leave war-torn Syria. The individuals and families were invited here from 2015 and are now living in the Thurles area.

"On the 100th anniversary of the war that began in Tipperary and resulted in the formation of the Republic, I have taken a new set of photographs that documents a beginning. For this exhibition at The Source Arts Centre, I photographed new members of the Irish community who had to leave the war and tyranny of their native Syria. Individuals and families welcomed from shattered, interrupted existences in Jordanian refugee camps, invited to make new lives in Tipperary in 2015" explained Murphy.

Both sets of images look to link the idea of conflict, not as an event or series of events that begin or end (a history) but one with identifiable, long-term consequences that may last for generations. One of these is displacement, in its myriad forms. Indeed it may be that one of the results of conflict is that there is no effective conclusion or resolution. For them there is no post-conflict, as they, the citizens involved, active or passive, come to terms with life-defining change, adapting to their circumstances for the sake of succeeding generations.

John Snee in Kilmainham Gaol in Dublin holds a photograph of himself in uniform taken during the truce that preceded the Treaty, a risky but common practice while negotiations took place with the British. Patsy Holmes in Mallow, County Cork is photographed at home holding a sign with hut number 19 of his C Company in a group shot of prisoners at Ballykinlar Camp in County Down. In September 2020, Mohammed Khalouf in Thurles holds a phone with practically the only photograph he has of his life in Syria.

Separated by practically a century in time, both the IRA volunteers and the displaced Syrians share an absence of personal photographs; the IRA for technological and economic reasons and sheer guerrilla discretion; the Syrians due to their need for hasty movement from Homs to refugee camps in Jordan.

Bringing these people together creates a new perspective on old stories of nationhood, establishing historical links for the future. The generation of revolution spawned a new homeland and in a collision of geography and fate, a new legacy is born," he adds.

The exhibition is open now and will run until January 16. Gallery opening hours 10am to 5pm from Tuesday to Friday and 2pm to 5pm on Saturdays.