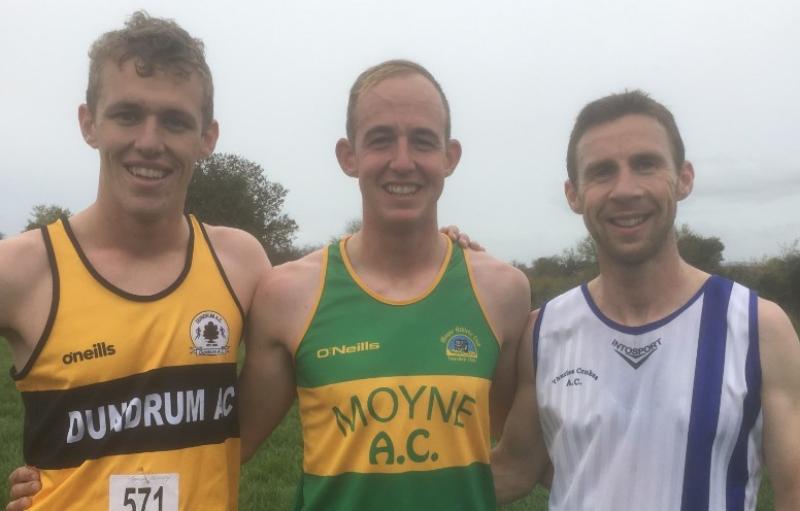 First three men in the men’s race from the same event and was fun over 6 laps left to right - Eamon Morrissey Dundrum, Liam Kelly Moyne and Liam Shanahan Thurles Crokes

The County Junior and Novice B Cross Country Championships took place near Lisheen Mines and the County Board are very grateful to Moyne AC and the Daly family farm for putting on a great promotion of the Sport. It was a pity we only had one athlete in both the Junior Women and Junior Men races, a possible explanation is that the Munster Juvenile Cross-Country Championships are on next Sunday at the Turnpike for many athletes eligible for the Junior Championships. Still we must congratulate both Jean Kelly of Dundrum and Nathan Bowe of Moyne for two very good performances as they ran very well in the same races as the Novice B athletes and they acquitted themselves very well.
In the Women’s Novice B race we had a very good event over the three-lap course. From the start Louise Fogarty of Moyne made her intentions known as she went to the front and set a strong pace that soon had the whole field in line with the chasing pack led by Anne Marie Boland of Clonmel. As the race unfolded, Louise kept the strong pace going and was well clear going out on the final lap, encouraged by her local supporters, she made every step a winning one to come home a very worthy and convincing winner in 12 mins 51 secs to the delight of her band of supporters. Going out on the final lap Ann Marie Boland was in 2nd place with her club mate Michelle Doherty in 3rd place and they were well clear of the chasing pack. Both athletes kept the momentum going to win the Silver medal (13 mins 2 secs) and the Bronze medal (13 mins 12 secs) respectively. For the record Mercedes Conjero Martinez of Clonmel was 4th (13 mins 15 secs), Mary Keane of Dundrum was 5th (13 mins 22 secs) and Edel Delaney of Moyne was 6th (13 mins 33 secs). In the team event with three to score Clonmel were convincing winners on 9 points (Ann Marie, Michelle and Mercedes) and were winning this Championship and Cup for the first time since 2010. The Silver medals were won by Moyne with their team of Louise, Edel and Aisling Maher who was 8th (13 mins 36 secs) while the Bronze medals were won by the Dundrum team of Mary Keane 5th (13 mins 22 secs, Mairead Julian 7th (13 mins 34 secs) and Laura McCarthy Armstrong 9th (13 mins 51 secs) with Mooreabbey Milers 4th Club, great competitive race.
The Men’s race over 6 laps also attracted a quality field and it was great to see two high quality races at this level. On the first lap a group of five athletes set the pace, Conor Ryan of Clonmel, Michael Gleeson of Templemore, Liam Shanahan of Thurles Crokes, Eamon Morrissey of Dundrum and the eventual winner and local favourite, Liam Kelly of Moyne. At the end of the 2nd lap Michael was lying 5th just behind the other four athletes. These four athletes were still together as they approached the start of the 3rd lap where Liam Kelly went to the front and increased the pace, gradually opening a lead on the other three athletes. He maintained this strong pace that soon saw him well clear of the chasing pack going out on the final lap with the minor medals to be decided between Conor, Liam and Eamon. Liam Kelly maintained the pace to come home a very worthy and convincing Champion and achieve an Individual double gold for his Club Moyne in 21 mins 49 secs with Louise winning the women’s equivalent, great performance by Liam who has been knocking on the door for this title for the last couple of years and great to see it paying off for him on home soil. The battle for the minor placings were decided inside the last 800m with Liam Shanahan going clear with about 700m to go to win the Silver medal (22 mins 9 secs) while Eamon Morrissey used his speed over the closing stages to edge out Conor for the Bronze medal in 22 mins 16 secs with Conor finishing 4th (22 mins 24 secs. For the record Barry Hartnett of Mooreabbey Milers was 5th (22 mins 47 secs) and Michael Gleeson of Templemore 6th (22 mins 49 secs). Indeed, looking at the top six finishers, they were all representing different clubs, brilliant to see. In the team event Conor had the satisfaction of leading his Club to the Gold medals along with Dermot Logue 7th (23 mins 6 secs) and Paudie O'Keeffe 12th (23 mins 25 secs). Clonmel were bridging a gap of 13 years, having last won this title in Dundrum in 2005. The Silver medals were won by the Templemore Trio of Michael, Peter Madden 7th (23 mins 4 secs) and Sean Percy 15th (23 mins 34 secs). This was Templemore AC first time winning Inter Club medals in this Competition and it is great to see a Club like Templemore back competing well again at Senior level. The Inter Club Bronze medals were won the Mooreabbey Milers trio of Barry, Kevin Lenihan 10th (23 mins 14 secs) and Willie O Donoghue 16th (23 mins 48 secs).
At the presentation of the awards the Co Chairman, Billy Purcell, thanked Moyne AC and the Clubs for supporting these Championships. He encouraged them to get their senior athletes out for the Munster Senior Women and Men’s Cross-Country Championships which are on at the Turnpike this coming Sunday, November 11th.

Pictured below first three women in the Novice B race at the County Junior and Novice B Cross Country Championships which took place near Lisheen Mines thanks to Moyne AC and the Daly family farm left to right - Ann Marie Boland Clonmel, Louise Fogarty Moyne and Michelle Doherty Clonmel 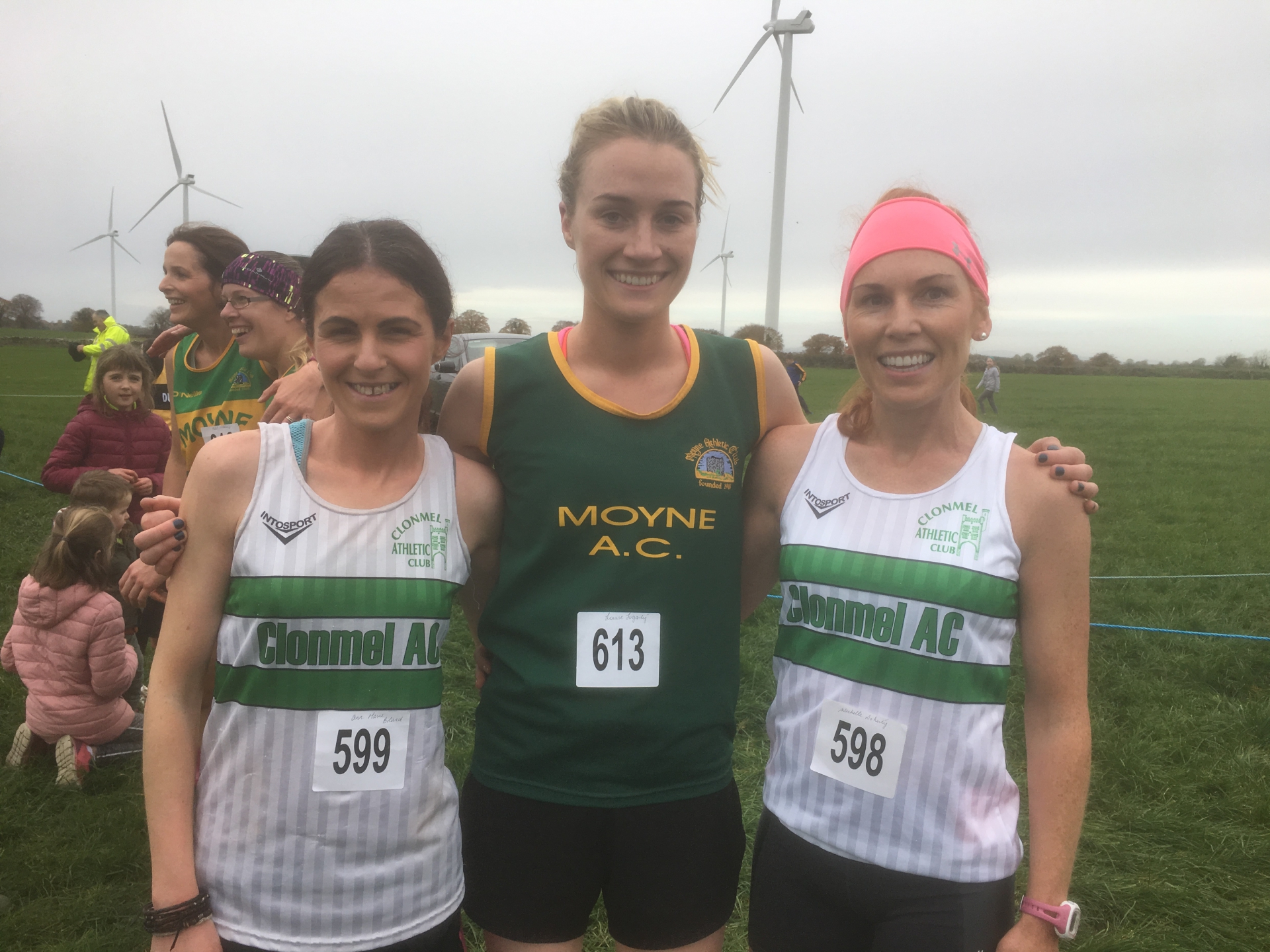