Juvenile, Junior and Novice ‘B’ Cross Country Championships in Moyne 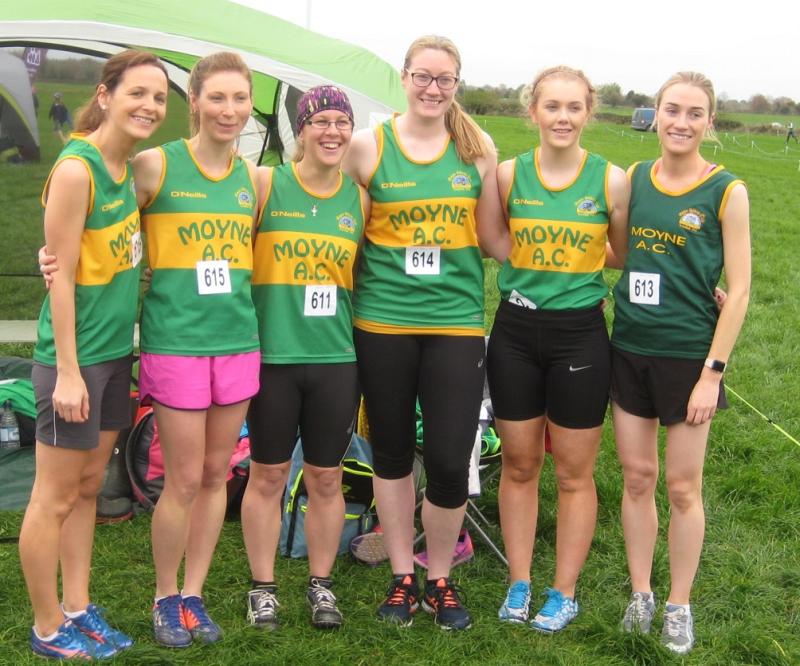 County Juvenile, Junior and Novice B Cross Country Championships
The Juvenile, Junior and Novice ‘B’ Cross Country Championships were held in Moyne on Sunday last. With very favourable conditions for running, the athletes were off to a winning start and it continued as there were 21 individual and 6 team medals won by the athletes!
First out on the course were the U9 Girls, Saoirse Deegan ran a super race to finished in 1st position, followed by Molly Jones 3rd, Roisín O’ Reilly 9th, Niamh Gleeson 10th, Ailis Concagh 13th, Ciara O’Dywer 19th, Kate Concagh 21st and Emma Ryan 23rd. Saoirse, Molly and Roisín also won a team gold medal.
David Nolan was 1st home for the U9 Boys, followed by Will Walsh 5th, Dáithí Cussen 8th and Gavin Doyle 11th. David, Will and Dáithí also secured a team gold medal for their efforts.
In U11 Girls race, Eleanor Doyle was 7th, Aisling O’ Reilly 8th, Emma Delaney 12th, Kate Delaney 15th, Aoife Kavanagh 19th, Ellen Nolan 21st, Laura Fogarty 22nd, Aoibhin O’ Dywer 24thand Gráinne Ryan 25th. Eleanor, Aisling and Emma won a team bronze medal.
U11 Boys were out on the course next and it was Luke Walsh who finished 2nd, followed by Rógan Lyons 4th, Jack Reddan 6th, Shane Moloney 10th, Bill Cussen 15th and Max Doyle 16th. Luke, Rógan and Jack won a team gold medal also.
The U13 Boys earned a team silver medal where Frank Doyle was 3rd, Conor Kavanagh 8th and Paddy Cussen 9th.
For the U15 Boys, Jake Bowe was 3rd, followed closely by Tomás Cussen 4th and Liam Ryan 8th. The boys won a team gold medal too!
The day was also a huge success for our Junior and Senior athletes. Not only did Moyne have a Junior Men’s champion in Nathan Bowe but Louise Fogarty and Liam Kelly won double gold in the women’s and men’s Novice event! Well done to all three athletes on their outstanding performance and what a great honour for the club.
In the Novice ladies event Louise Fogarty led the field from the outset. Louise ran strongly throughout and was rewarded with a gold medal. Louise was followed home by a great performance by Edel Delaney, who is having a wonderful first cross country season, in 6th, followed by Aising Maher in 8th, Sharon Cantwell in 11th, Susan Fogarty 12th and Ber Spillane 17th. The ladies won a team silver medal for their efforts.
The Novice men had a tall task to follow the success of the women in what was a highly competitive race. Liam Kelly ran a very strong throughout and finished convincingly to claim the title. Jodie Sweeney and Patrick Bowe both ran strong races on home turf to finish 18th and 24th overall. The men’s team was 5th overall. Well done to the three men!
Congratulations and well done to all the athletes who competed as they should be very proud of their efforts.
Many thanks must go to everyone for their support and to the Daly family for the use of the land.