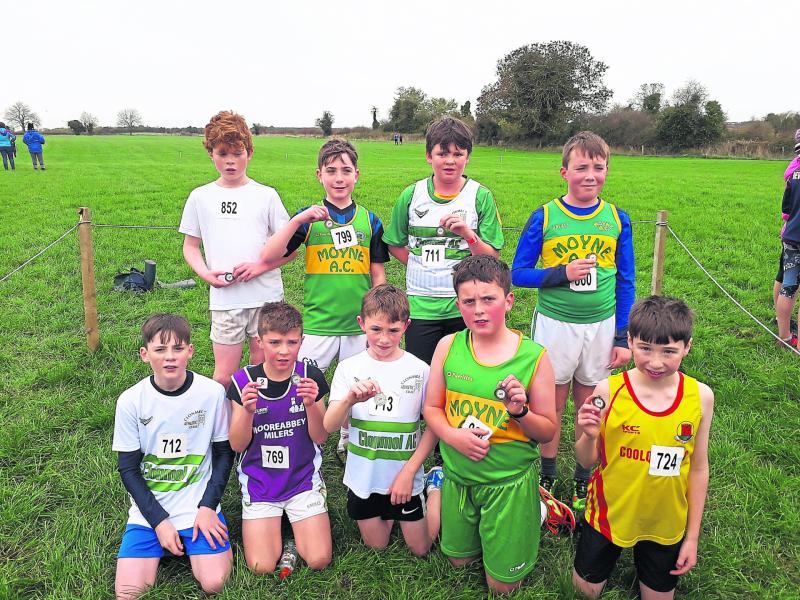 Under 13 medal winners from the County Juvenile B Cross Country competition which was hosted by Moyne AC in the shadow of the wind turbines last Sunday November 4, 2018

Munster Juvenile Evenage and Senior Cross Country Championships, Two-Mile-Borris
The Munster Juvenile even-age and Senior Cross Country Championships were hosted by Moycarkey-Borris on Sunday last. Hayes’ farm generously provided the challenging course, a course which many Tipperary athletes are familiar with as the County championships were held in this venue earlier this year. While heavy rain had fallen over the weekend and the course was wet, there was fast and exciting racing to be witnessed throughout the day.
The first event of the day was the girls Under 9 category. The Moyne team did exceptionally well, placing 5th in this age group and every athlete should be proud of themselves. Our first Moyne finisher was Ciara Joyce who finished in 19th. Following her was Olive Spillane Leane in 43rd, Maria Doyle in 51st, Heidi Maher 60th, Isabel Ralph 69th,Roisin O'Reilly 73rd, Saoirse Deegan 78th, Ailis Coucagh 83rd and Arlene Flanagan in 88th. Tipperary were 4th in this event and both Ciara and Olive were scoring members of this team. In the boys equivalent age group our top finisher was Jack Guilfoyle in 59th position, followed by David Nolan in 75th, Will Walsh 82nd and Dáithí Cussen in 99th position. Tipperary were 4th in this age group too and Jack Guilfoyle was a member of this team.
In the girls under 11 age group we had more impressive performances. Our first finisher for the club was Alana Spillane in 61st position. Alana was followed home by Dearbhla Gleeson in 82nd, Meadh Leahy in 85th, Ruth Phelan in 100th position, Aisling O'Reilly 131st, Kate Tobin 143rd, Ava Tobin 153rd, Isabel Jones 157th and Ellen Nolan in 158th position. Moyne finished 12th in the overall team standings. In the boys under 11 race we had Luke Walsh, Denis Brolan, Daniel Tobin, Jack Reddan, Rógan Lyons and Shane Moloney in 83rd, 93rd, 101st, 107th,113rd and 138th respectively. Bill Cussen and Max Doyle were 140th and 141st. The boys finished 16th in the team event.
The girls under 13th had four competitors wearing the green and gold. Saoirse Doran was 82nd in a brave run. She was followed home by Ashling O'Loughlin in 111th , Olivia Ralph 119th and Grainne O'Loughlin 120th. The girls placed 14th in the overall standings. In the boys under 13 event, Adam Phelan was 77th and first home for the Moyne team. David Doyle followed in 86th position, followed by Adam Spillane Leane 93rd and Jack Flanagan 105th. The boys finished 11th in the team event.
Only two ladies represented the club at the highly competitive under 15 girls event. Mary Cussen and Millie Doyle Ryan ran excellent races to finish in 58th and 61st respectively. In the boys race, Tomás Cussen was the only club representative and finished in 55th position.
In the girls under 17 event Emma Gleeson had a super performance to finish in 25th position. Emma was rewarded for her hard work by winning a silver medal with the Tipperary team. Equally Ellie Holohan had an impressive performance to finish in 24th position in the girls under 19 event. Well done to both these athletes who are competing at a high level.
In the Senior completion Angela Fogarty was our only club representative and she certainly represented Moyne with style. Off the back of a county title two weeks previously Angela ran a confident and very strong race to finish 15th overall in the ladies 6k race. Angela did very well to place so high and was 6th member of the Tipperary team who took the gold medal. Well done Angela on another excellent achievement.
Thanks to all those who came out and supported and those who helped our athletes on the day. A big thank you to Moycarkey Coolcroo and the Hayes’ family for hosting what was, once again, a successful cross country championships. Well done to all athletes who competed in the tough conditions.