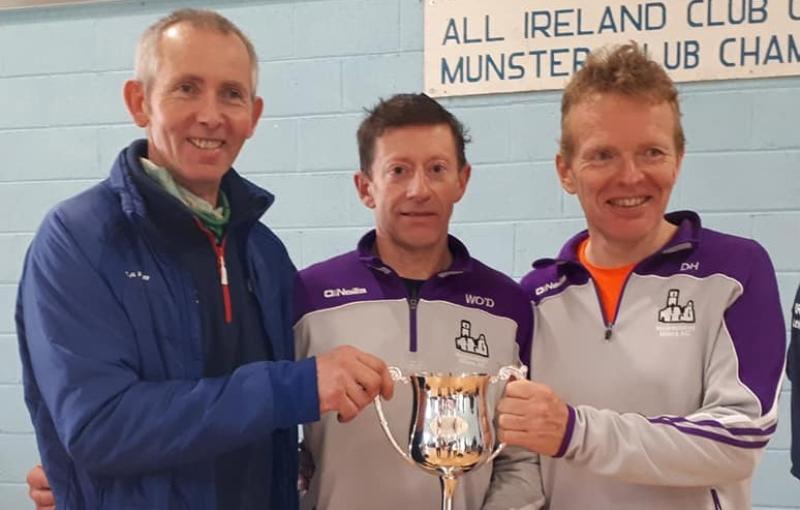 County Masters
On a brisk Sunday afternoon last the master women and men of the club descended on Thurles Crokes AC for the county masters cross country. The ladies had 4k to cover while the men had 7k. With good terrain under foot both races took off at lightening speed. With a team in the O/35 women & men, a team in the O/45 women and a team in the O/50 men expectations were high. Marie O'Shea set off and settled into the race early by holding 6th place throughout, Mary Louise Ryan and Martina Moloney worked well with each other to complete the O/35 team winning them a bronze medal. Mary Pyke, Patricia Ryan, Mandy Parslow, Patricia Blackburn and Catherine Hogan also took on the 4k. Our O/45 Ladies weren't to be out done with Mary Pyke, Mandy Parslow and Patricia Blackburn taking home a silver medal. To add the their success the girls also took home in their individual categories, Marie O'Shea gold, Mary Pyke bronze, Patricia Blackburn silver and Catherine Hogan bronze. The men's teams weren't going to be left out and the success continued here for the club. The leader of the men's race chopped and changed several times before Stuart Moloney took charge. Following Stuart closely was Kieran Lees in 5th who held his own throughout, mixing the field and teams up next was Tom Blackburn, Kevin Lenihan, Willie O'Donoghue, Gerard Hanley, Damien Holian, John Hayes and Paddy Bourke. Stuart Moloney ran home in 1st place with a country mile to spare to retain his county masters title. The O/35 team of Stuart Moloney, Kieran Lees, Kevin Lenihan and Gerard Hanley took home a silver medal. Tom Blackburn, Willie O'Donoghue and Damien Holian also weren't going to be leaving empty handed as Tom and Wille had come away as part of the winning O/35 team the previous year they set their sights on the much coveted O/50 masters cup, with hard work came reward and they took home the O/50 masters cup and a gold medal. To add the their masters cup success Tom Blackburn took home a silver medal with Willie O'Donoghue taking home a gold medal in their respective categories. Great support running from Patricia Ryan, John Hayes and Paddy Bourke, great to see so many club members out on the day.

Mile Dash
On Saturday 29th of December the Mooreabbey Milers will host their annual mile dash. So add the date to your dairy whether your looking for a PB or a stroll with the family this is the place to be. Runner €8, Walker €5 and €10 family. Premier Chip timing will be on hand to record the event then come and join us in the community centre for the prize giving and refreshments. 1st 3 male's, 1st 3 females, 1st junior boy and girl and break the course record of 4.19 for an added bonus.

Training Adults
Adults train on Tuesday and Thursday nights at 7pm in the community field in Galbally. New members always welcome. Adults also do hill/mountain and trail training, become a registered member and get the added benefit of being included in the club's whatsapp to keep up to date with training/races and events.
Registration forms are available at training.

Training Juveniles
Training in the community field in Galbally Monday nights at 7pm and Thursday nights at 6pm. For insurance reasons all juveniles must be registered with the club. Registration forms are available at training each night. Cost of Registration is €15 per juvenile. (Family rates available).
(Juvenile training has finished for the Christmas holidays see ye all in the new year).

Beginners
Classes continue for beginners on Monday night's 7pm to 8pm in the community field in Galbally facilitate by Patricia Blackburn.