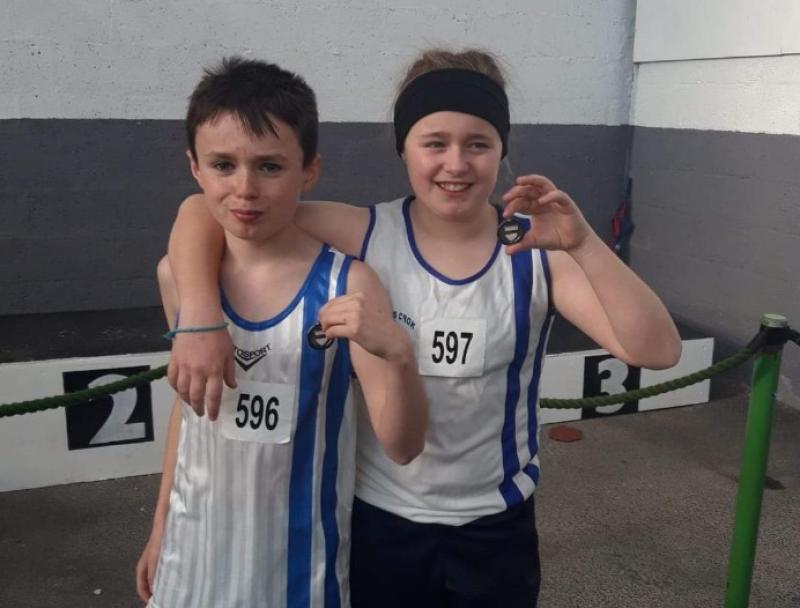 Twins Alex and Leanna Coppinger both won medals for the club

Excellent performances by our athletes at the County Indoors Championships in Nenagh on March 16. In the U9s Danny O’Dowd, April Kearney, and Jack Mocker put in notable runs for Crokes. Orla Pamplin came close to medals in the 300m U/10, finishing in a good 4th place. Jessica and Caragh Ryan represented Crokes well in the 600m U/12 with Jessica claiming the bronze medal, and Caragh coming home in 4th. Emily Mills also competed well in Nenagh over 60m. In the sprint Ella Moloney and John Dwan both made the finals. In the final races of the day Alex Coppinger ran a super race for a clear 2nd in the 600m U/13. His time of 1.54 was very fast and he ran a very positive and well judged race to win his section. Emmett Fogarty also took a silver medal in the Junior 1500 with some really positive running. Jack O’Mara recently won a bronze in the Munster Schools Indoors over this distance, and he participated the County championship despite being below par due to flu. Stephen Mawe placed 3rd in the Junior 800m, finishing fastest, and he can improve his best time in the future.
Well done to all our athletes who competed in Nenagh.

Saturday we saw twins Alex and Leanna Coppinger both win medals for the club. Leanna in her first County Championships won Gold in the shot and Alex took silver in a very competitive 600m, winning his heat in a great time but narrowly missed the gold which was one by another strong athlete in the next heat, medals decided on times in the end and only 3 seconds seperated gold and our shiny silver taken home by Alex. Well done to both champions

Thurles Crokes A.C. had a great day at the Juvenile County Indoors in Nenagh where we had a great group of very young athletes take part in the mornings session. With all our young athletes giving it all in their events making numerous finals and bringing some medals home. A few narrowly missing out on medals after winning their races but lost out on time by only seconds. We are very proud of these young athletes with plenty more to come from them over the Summer.