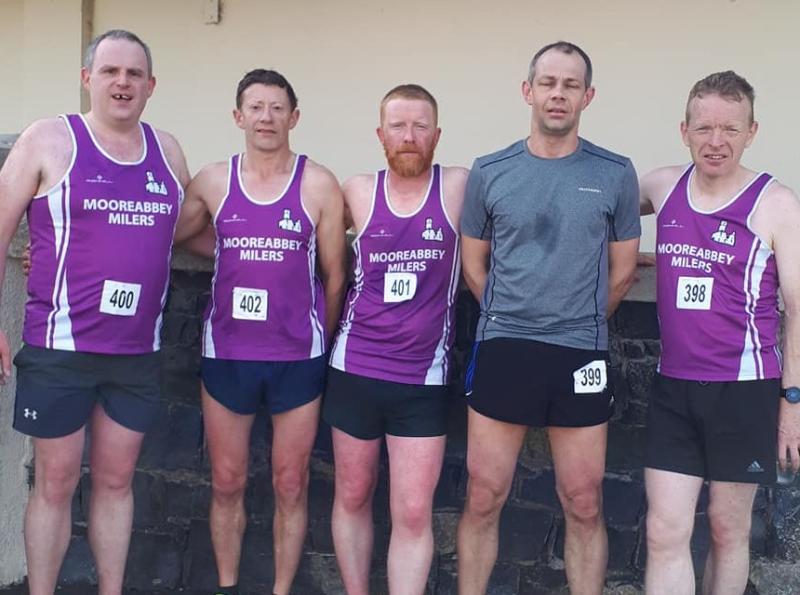 County Novice B Road Championship
As the county roads season starts to wind down the third last race took place in Ballingarry Co Tipperary last Sunday. The race saw the ladies compete over 3k and the men compete over 6k for the Novice B. We had three ladies compete and five men. The ladies team was made up of Mary Pyke, Patricia Ryan and Michelle Carey. And what a team this was as the three ladies walked away with the bronze team medal, this was a first championship medal for Michelle Carey. The hardship continued for the men as fourth was to be their destiny again. The mens team was Willie O'Donoghue who crossed the line first for the Milers in 5th position follow closely by Damien Holian in 6th and rounding out the team was Robert Cunningham with mighty running and team support from Dariusz Gazdowicz and John Hayes.

Bour 3 Peaks
The 3 peaks that surround the picturesque twin towns of Killaloe, Co Clare & Ballina Co Tipperary were ran last weekend. Known as the Bour 3 peaks Moylussa, Tountinna and Keeper Hill.
Peak 1 was ran on Saturday morning in Moylussa, Co Clare the distance covered was 10km. Peak 2 was ran on Saturday evening in Tountinna, Co Tipperary the distance covered was 8km and finally Peak 3 was ran on Sunday at Keeper Hill, Co Tipperary with a distance of 16km covered. The Boru 3 Peaks is an annual charity hill run and walking event organised by volunteers. 100% of the proceeds goes to local charities, this year all proceeds go to the new development of the Community Hub Cafe by Killaloe/Ballina Community & Family Resource Centre. Out on all 3 peaks was Tom Blackburn looking to retain Michael Curley Cunningham Cup supported by Patricia Blackburn who ran Tountinna and Keeper Hill. Tom Blackburn was in flying form and brought the Michael Curley Cunningham Cup back home to the Mooreabbey Milers club in Galbally.

The Annual Michael Curley Cunningham 4 Mile
With only 6 weeks to go to the Michael Curley Cunningham 4 Mile road race in Galbally. Friday, May 10 will see the race begin at 7.30pm sharp at 'Jack Ryan's cross' on the Galbally to Garryspillane road. On the night the race will be chip timed by Premier Chip Timing, safety marshals will be on the route. More details to follow.

Mooreabbey Milers Club events for 2019
- Cahir Half Marathon and Relay (Saturday, July 6). We have a massive €500 for first male and female home in this one.
- Mile Dash (Saturday, December 28)