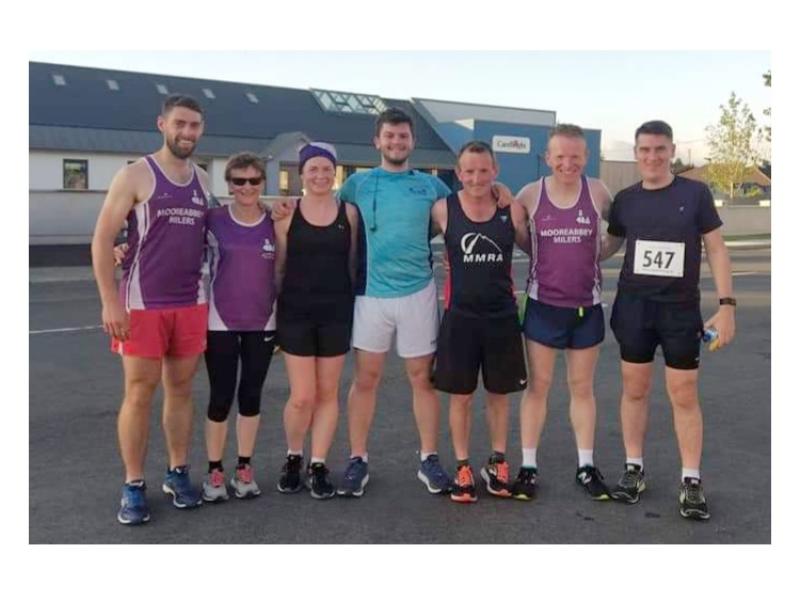 The group that supported the Bruff 4 mile last Friday night

Tom is Crowned King of Connaught

County Mayo was the destination for Tom Blackburn last weekend as he took on the challenge of Mweelrea and Nephin mountains. Mweelrea mountain stands at 814 meters and is the highest point in Mayo and in the province of Connaught.
It consists of five peaks flanked on one side by Killary Harbour, Ireland’s only true fjord, and on the other side by Doolough Pass, a glaciated valley. There are magnificent views from the top including the Atlantic Ocean, Ben Gorm Mountains, the Twelve Bens in Connemara, the Maumturks and the Sheeffry Hills. A distance of 10.70 km to be ran over difficult terrain, Tom took off from the start line with lighting quick speed. At the turn around on top Tom was holding 4th position, but not content with this Tom chased down the leading pack to cross the finish line in 2nd. This run was part of two leagues the Connaught Championship and the Irish Championship. The following day Nephin was to be Toms challenge. At 806 meters Nephin is the second highest mountain in County Mayo, the highest in North Mayo and the 36th highest in Ireland. It dominates the landscape for miles around, overlooking Lough Conn to the east, Clew Bay and the Nephin Beg range to the west, Mayo and Galway to the south and Donegal to the north. It lies in the centre of Glen Nephin, a district bounded by Lough Conn to the east, the Windy Gap/Barnageehy to the south, and Birreenacorragh mountion to the west. The distance for this one was 5.5 km and was part of the Connaught championship. Tom did one better on this one and finished 1st allowing him to lay claim to the Connaught champion crown.

Outdoor League
The AAI National national outdoor league Round 2 took place in Santry last Sunday. Flying the purple and white at this national league was Larry O'Grady. Larrys event in this league was the 2kg discus. Larry took 4th place with PB of 28 metres 50cm.

Dromcollogher Festival 4 Mile
For the third year in a row Willie O'Donoghue supported the
Dromcollogher festival 4 mile celebrating its 60th year this year. Willie took to the start line on fresh sunny night with 170 others competitors. Crossing the finish line in 7th overall taking 1st in his category in a time of 23.41

Ballyhoura Active Series
Bruff on Friday night was the locality for the hindmost run of the Ballyhoura Active Series. Distance for this one was 4 miles. We had a great show of club runners out on the beautiful summer's evening. Gerard Hanley who achieved a PB on the night Liam O'Donnell Damien Holian Brendan Houlihan Evan Wright Mary Pyke Patrick Hartigan Mary Hinchy and Jason Wright. Keeping up the podium places on this one was Damien Holian and Mary Hinchy who were 1st it their categories.

Sheep's Head Way
The signpost was pointing Cork direction early last Saturday morning for nine club members for a 15km route known as the Sheep's Head Way. A loop trail which begins at the Tin Pub in Ahakista, and offers stunning views from Dunmanus Bay to Bantry Bay. The Glanlough Loop offers challenging climbs, spectacular views, and a perfect way to see The Sheep’s Head Way in all its glory. Spending quality group time together for this one was Marie and Paddy O'Shea, Patricia and Robert Cunningham, Ray Murray, Mandy Parslow, Mary Pyke, Catherine Hogan and Patricia Blackburn.
This years beneficiarys are Pieta House as well as local groups Muintir Bhaire Sea Scouts and Muintir Bhaire Foroige club.

Galtee Challenge
The Galtee challenge took place last Saturday morning a self navigating Challenge of 31km that traverse the entire Galtee Mountain range, taking in all major peaks with a total height gain of 1,700 metres. Quality navigational skills is a necessity to over come the mighty Galtees. This was no problem to our own Padraigin Riggs. The direction was east to west, starting in Cahir, then to Farbreaga, Greenane, Galtee Beag, Galtee Mor, Slievecushnabinna, Carrignabinnia, Lyracappul and Temple Hill with the finish at Anglesboro.