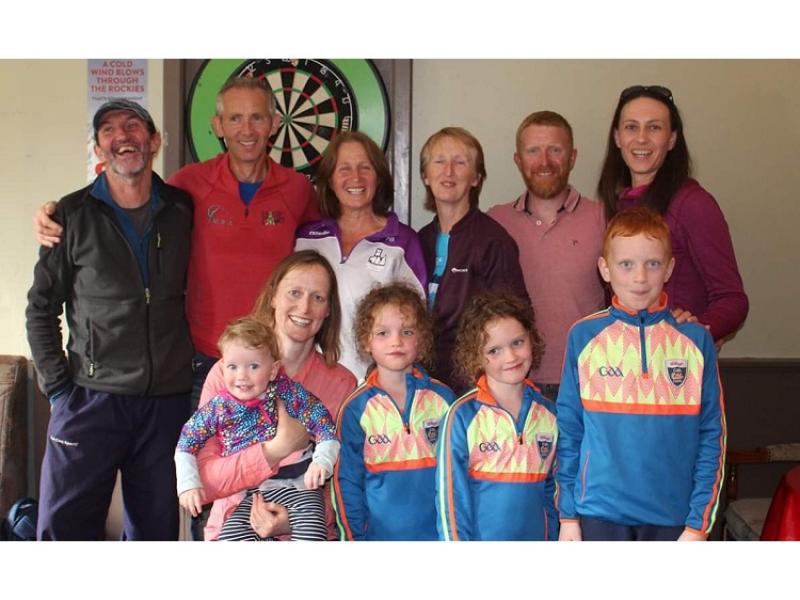 National Masters
It was an early start for our two masters Larry O Grady and Willie O Donoghue last Sunday morning as they headed for Tullamore County Offlay to represent club, County and province at the national masters outdoor track and field. Tullamore Harriers were hosts at their spectacular facilities in Tullamore. Tullamore Harriers founded in 1953 by a chance meeting of nine young men under a street light on the main street in Tullamore before the nine young men adjourned to Clarke’s Barber Shop where the first committee was elected and what great hosts they were to our men last Sunday. Larry O Grady competed in four events the shot putt, the discus, the high jump and weight for distance while Willie O Donoghue competed in the 5,000 meter track run. Larry finished 6th in discus, 4th in shot putt took bronze in the weight for distance and silver in the high jump. In the 5,000 Willie zipped around the 12 and a half laps of the track to claim his first national silver medal. Munster And Irish Championship League
Last Sunday saw the final race of the Irish and Munster Championship league take place on Galtymore. It was a race to the top of Galtymore and back over peaks of Cush and Galtybeg. Cnoc Mór na nGaibhlte 'big hill of the Galtees', Galtymore is the highest of the Galty Mountains, and is a 30 kilometre range that runs east west between counties Tipperary and Limerick, and is the highest point of both counties. The race was 13 kilometres long with 1,340 metres of climbing and over some rough open mountain terrain. Competing for a podium place in the Munster and Irish championship was Tom Blackburn and Mary Louise Ryan, both needing a high ranking finish on Galty Mór to succeed and true to their ledendary names Tom and Mary Louise gave it their all. Tom bounded across the finish line to finish fourth overall giving him bronze in the Munster and Irish championship while Mary Louise was third lady on Galty Mór giving her a silver place standing in the Munster championships. Also out on Galty Mór last Sunday representing Mooreabbey and MMRA was Kevin Lenihan, Robert Cunnigham, Dariusz Gazdowicz, and Gerard Griffin. Gerard also took 1st in his category in the Munster championship league. Organiser and deputy RD on the day was Patricia Ryan with help from club members Paddy, John, Mary, Jane, Stuart, Martina and Patricia Blackburn.

Please Support James's Journey
On Sunday, August 25, to raise funds a 10k run and a 5k individual / family walk will be held. Registration in Bruff Ruby Club from 12 noon. Walk and run start time is 1 o'clock.

Training Juveniles
Juvenile training has taken a break for the summer but it will return soon.