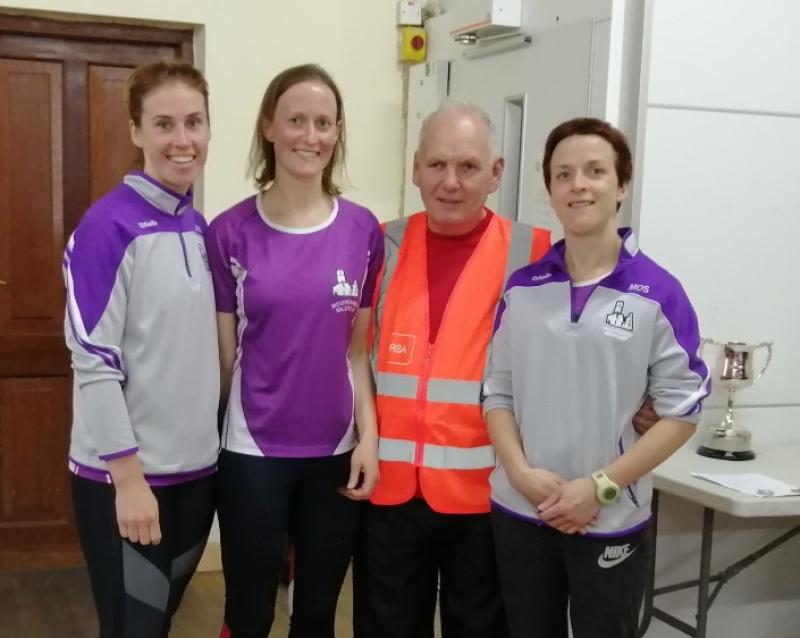 County 10 Mile Road Championship
Thitteen was the magic number last Sunday as 12 Milers took to the locals roads for the County 10 Mile Road Championship and kept 13 of the county medals at home in Galbally. Mooreabbey Milers were proud hosts to the county Tipperary 10 mile last Sunday morning. An early morning start of 10am was decided upon to avoid the Sunday traffic. With the sambos made and the burker boiling the whistle blew at Jack Ryan's Cross to herald the start of the race passing back in through the village and out onto the Tipperary road where at mile 3 the runners made a left turn. For the next 3 miles the road was flat and fast until the runners entered Garryspillane and swung left. Over the bridge and past the Co op the runners vered slight left again and began their last 3 mile trek home to the finish line in the village of Galbally. Out representing the club was Tom Blackburn, Willie O Donoghue, Gerard Hanley, Damien Holian, Robert Cunningham, Marie O'Shea, Mary Louise Ryan, Martina Moloney, Dariusz Gazdowicz, Mary Pyke, John Hayes and Paddy Bourke. Medal winners in the ladies we had category gold for Mary Louise Ryan and Marie O'Shea and category bronze for Martina Moloney and Mary Pyke, with Marie, Mary Louise and Martina also taking the team bronze medal. In the men's we had a category gold from Tom Blackburn and Willie O Donoghue while Damien Holian took a category bronze. Our mens B team Robert Cunningham, Dariusz Gazdowicz and John Hayes took the team silver.
Club chairperson Patricia Ryan was RD for the race with her army of club helpers.

The Kerry Way Ultra Lite
This mid distance event was held over The Kerry Way route from Sneem to Killarney in Co. Kerry. Going from west to north east, starting in Sneem at North Square and finishing at Randles Nissan Garage on the Muckross Road in Killarney. This route was the slightly shorter version of The Kerry Way Ultra tipping the scale at approx 58 kilometres. The event was dictated by high elevation, hills, extreme distance, uneven terrain, roots, rocks, road traffic and general trail conditions found along the mountains and coastlines encounted. This being Kevin's first event of this caliber he finished in an impressive 7th place in just over six and a half hours.

Dingle Half And Full Marathon
The Dingle marathon and half marathon took place last Sunday morning on the scenic Dingle peninsula. Both the half marathon and full marathon started together from the Marina in Dingle Town with all runners heading off together in the direction of Ventry and onto Slea Head. On leaving Dingle, they passed over Milltown Bridge, past the woodlands at Burnham to the seaside village of Ventry where they got the panoramic views of the long, curved strand of the stunning blue flag beach. On leaving Ventry the route continued westward, past Dunbeg Fort, with a sheer cliff on one side and the Atlantic Ocean on the other. At Fahan the road crosses a ford where a water stream is magically redirected from the road to avoid runners wetting their feet! This is the only day in the year that water does not pass over the road ford. The course then reaches Slea Head itself, marked by a stone crucifixion scene, with dramatic views to South Kerry and the Blasket Islands. The course then follows the coast north, past the iconic Coumenoole Strand, where some of the filming of Ryan’s Daughter took place and on to Dunquin village. Running in the half in the purple and white was Padraigin Riggs who finished near the small village of Dunquin outside the door of Kruger’s Pub, while the Full Marathon continued north and east from Dunquin through to wild open countryside for our own Derrick Ryan and James Fletcher. The spectacular scenery continues to keep their spirits alive and once thry were through the beautiful village of Ballyferriter, their journey continued on with some very special views of Murreagh. A challenging part of the course lay ahead, with a tough uphill climb around mile 22. Once they had conquered this section, they were at a point where they could see over the entire landscape, covering a long straight stretch before returning to the finish line at the Dingle Marina.

Training Juveniles
Juvenile training takes place in the community field Galbally each Monday night at 7pm with qualified coachrs. For insurance purposes juveniles have to be registered with the club in the year of their 7th birthday €20 per juvenile, family rates available. Registration forms are available at training.

Couch to 5k
Couch to 5k will be returning on Monday, October 7 so if you are starting out why not join Tricia Chi Running style couch to 5k classes and set yourself up for a lifetime of injury-free running.