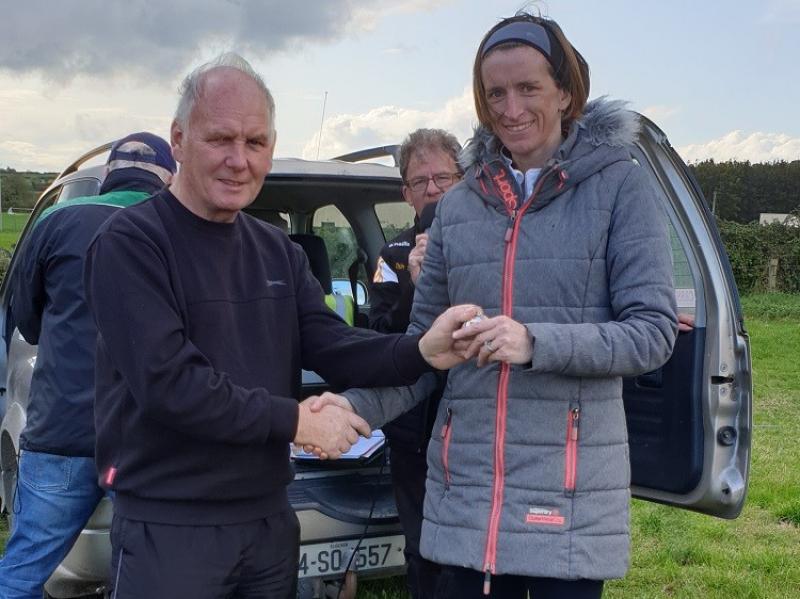 Moyglass was the venue last weekend for the County Intermediate Cross-Country Championships. Great credit to the Moyglass Club for having everything in order, even the weather. Both races were run over a very good cross-country course that had hills, some soft under foot but mainly it was a very dry course on a sunny day. As such we were treated to two very good races with both Champions winning very convincingly and both were very popular winners and worthy Champions.

In the women’s race, over the 3-lap course, the early pace was set by Lorraine Healy of Moyne and Karen Coughlan of Dundrum.
Both athletes set a strong pace that soon had them well clear of the chasing pack at the end of the first lap. The lead changed a few times on the 2nd lap and they were still together as they went out on the last lap. Learning from her experience the previous week when finishing 2nd to Louise Fogarty of Moyne, Karen was determined to go one better and so she increased the pace on the final lap and on the uphill stretch she put in a massive effort that saw her open a slight lead on Lorraine. Buoyed by this Karen on reaching the top of the hill kept the pace going and made every stride a winning one as she came home a clear winner in 20 mins 38 secs, brilliant performance and a richly deserved County title, her first Individual success. Then we had Lorraine Healy also running very well when winning the Silver medal in 20 mins 50 secs with another great performance. The battle for the Bronze medal was also very competitive as at one stage we had three athletes vying for it, Patricia Ryan of Dundrum, Mary Louise Ryan of Mooreabbey Milers and debutant Gillian Lawlor of Thurles Crokes. Going out on the final lap it was down to two, Gillian and Mary Louise and in the final push for the line Gillian edged it to win her first ever individual medal when winning the Bronze medal in 21 mins 22 secs, great racing. For the record Mary Louise Ryan of Mooreabbey Milers was 4th in 21:28 with Patricia Ryan of Dundrum 5th in 22:10 and Eimear Loughman of Dundrum 6th in 22:14. With three athletes in the top six, Dundrum were convincing Champions on 12 points.

The Silver medals were won by the Thurles Crokes trio of Gillian, Laura Burke Carey 7th and Martina Ryan 11th on 21 points. The Mooreabbey Milers team of Mary Louise Ryan 4th, Martina Moloney 10th and Patricia Ryan 14th on 28 points won the Bronze medals. History was made in Moyglass last Sunday with Dundrum winning both the Intermediate Club title and the Novice Club title, for the very first time, in the same year, brilliant achievement. They have a strong squad now to go all out for that elusive three major titles in the same season by aiming to win the County Senior Club title, a first in the Club’s history under Athletics Ireland.

The Men’s 8K race also proved very competitive. Here again after the initial charge, the pace was set by four athletes Colin Bradshaw of Dundrum, Eoin Buckley and Aaron Quigley of Nenagh Olympic and the eventual Champion, Paddy Cummins of Moycarkey Coolcroo. This quartet were still together as they went out on the 2nd of the 5-lap event as they had opened a sizeable lead on the chasing pack. Midway through the 3rd lap the lead was shared by Paddy and Eoin as they increased the pace. Paddy was dictating the pace at this stage as he was very determined to improve on his performance in the County Novice. He increased the tempo and like Karen on the 2nd last lap he put in a very determined and sustained effort on the uphill section of the course that saw him put daylight between himself and Eoin. Having got this lead Paddy maintained the pace that saw him extend his lead all the way to the line to win his first County Cross Country title in style and like Karen was applauded by the spectators at the finish, brilliant running and a well-deserved title 28 mins 32 secs. Then we had Colin Bradshaw of Dundrum overtaking Eoin on the final lap to win the Silver medal in 29 mins 7 secs with Eoin winning the Bronze in 29 mins 20 secs. For the record Tom Blackburn of Mooreabbey Milers was 4th in 29:57 with Aaron Quigley Of Nenagh Olympic 5th in 30:11 and David Sheahan of Nenagh Olympic 6th in 30:33. Both Paddy and Colin went one better than last year over the same course when Paddy was 2nd and Colin was 3rd. For Eoin is was his 2nd Bronze medal in 8 days as he won the County Novice Bronze medal in Newport the previous Sunday. Hopefully this trio of athletes will form part of a strong County squad at next Sunday’s Munster Novice Cross Country Championships in Limerick. With three in the top six and with Andy McLoughlin 17th in 32:39, Nenagh Olympic won the Intermediate Inter Club title for the very first time under Athletics Ireland on 31 points. It is great to see Nenagh Olympic competing well again at Senior level in the County. The Inter Club silver medals were won by Dundrum, the defending Champions on 35 points with Mooreabbey Milers winning the Bronze medals on 37 points, very close team event, six points separating the top 3 teams.