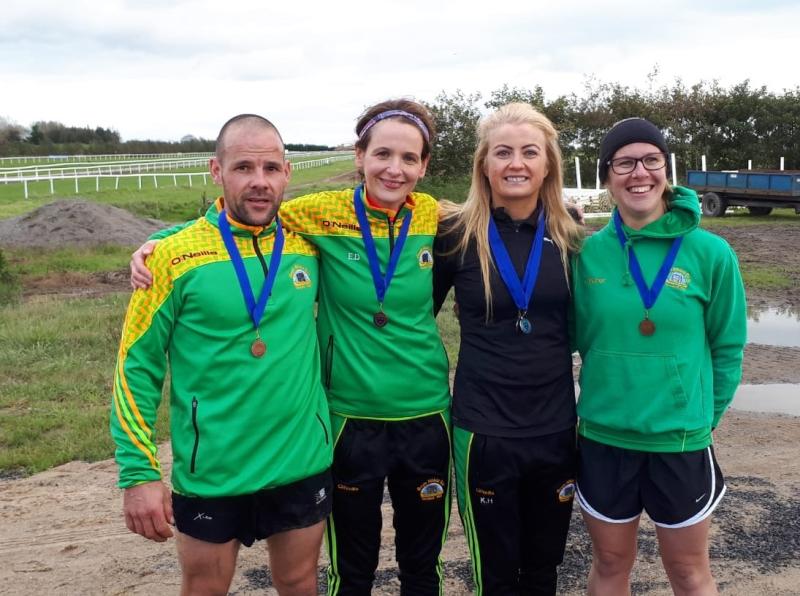 Munster Novice Cross Country Championships
Six adults represented the club at the Munster Novice Cross Country Championships held in Limerick Racecourse on Sunday October 20 and despite the very wet and extremely mucky underfoot conditions all six put in terrific performances. None more so than the ladies’ team of Lorraine Healy, Angela Fogarty, Edel Delaney and Aisling Maher who combined brilliantly to win the bronze club medals, a historic occasion for the club in the history of the AAI, having never reached this level before. Lorraine led them home in 5th place, with Angela in 10th, Edel 25th and Aisling 27th. Lorraine and Angela also had the honour of being part of the Tipperary team that won silver medals in the Inter-County championship. Stephen Flanagan and Michael Delaney were our representatives in the Men’s event and conditions underfoot had considerably worsened with this being the last race of a 13-race programme but credit to both athletes as they fought hard through the conditions. Stephen finished a brilliant 15th and first Tipperary man home with Michael coming through for 49th place, in only his second ever outing for the club. Stephen had the honour of leading the Tipperary men’s team to bronze medals in the Inter-County event, a first Munster medal for him also. We certainly must commend all six athletes on their performances and congratulate them on their achievements.

Munster Even Age Juvenile Cross-Country Championships
The Munster Even Age Cross Country took place in Limerick Racecourse on Sunday October 20. Conditions were very difficult underfoot for our juvenile athletes but well done to each and every one of them for competing in their race.
U10 girls were first to the start line. Moyne had 6 girls running the 1,000m distance. These girls were Roisin O’Reilly, Saoirse Deegan, Emily Cahill, Olive Spillane Leane, Arlene Flanagan and Heidi Maher. Heidi led the girls home finishing in 61st, followed by Emily 75th, Olive 82nd, Saoirse 92nd, Arlene 93rd and Roisin 97th. Heidi, Emily, Olive and Saoirse finished 15th in the club event. Heidi was also the 6th member of the Tipperary team that finished just outside the medals in 4th place.
U10 boys followed with Noah Murphy, Michael Doyle, Seán Cahill, Gerard Delaney, David Nolan and Jack Guilfoyle also running 1,000m. First across the line for Moyne was David in 55th, followed by Jack 64th, Noah 103rd, Seán 121st and Gerard 124th. David, Jack, Noah and Seán finished 16th in the club event.
Aisling O’Reilly, Alana Spillane, Eleanor Doyle, Dearbhla Gleeson and Ruth Phelan ran 2,000m in the U12 race. Alana finished 28th, Ruth 102nd, Dearbhla 103rd, Eleanor 114th and Aisling 117th. Alana, Ruth, Dearbhla and Eleanor finished 15th in the club event. Alana was also the first girl home for Tipperary but again the Tipperary team was outside the medals finishing 5th overall.
Jack Cahill was our only athlete in the U12 boys 2,000m event. Jack finished 67th. He was also the 6th member of the Tipperary team which finished outside the medals in 4th place.
Aisling O’Loughlin, Moya Brennan, Emma Hickey and Gráinne O’Loughlin took part in the Girls U14 race running a distance of 3,000m. Aisling led the girl’s home to finish in 81st, followed closely by Moya 84th, Gráinne 90th and Emma 91st. These 4 girls finished 12th in the club event.
Next up were the U14 boys made up of David Doyle, Adam Spillane Leane, Adam Phelan and Jack Flanagan, these boys also running 3,000m. David was first home for the club in 34th place, followed by Adam Phelan 63rd, Jack Flanagan 78th and Adam Spillane Leane 80th. These 4 boys were 7th in the club event.
Aaron Moore was our only competitor in the U16 Boys 4,000m category, unfortunately due to an injury Aaron was unable to finish the race.
Well done to all 27 juvenile athletes on your huge effort today, the club are very proud of you all.

Dublin City Marathon
The best of luck to club athletes Brian Carroll, Frances Long and Deirdre Royce as they compete in the Dublin City Marathon this Sunday. Lots of training and commitment by these three athletes will surely bring about some great results for them.

Lotto
Congratulations to this week’s winner, Ber Spillane. Many thanks to everyone who has and continues to support the club by being members of the lotto. This is very much appreciated. Lotto tickets (€2) are available at each training session and we encourage members to purchase same.