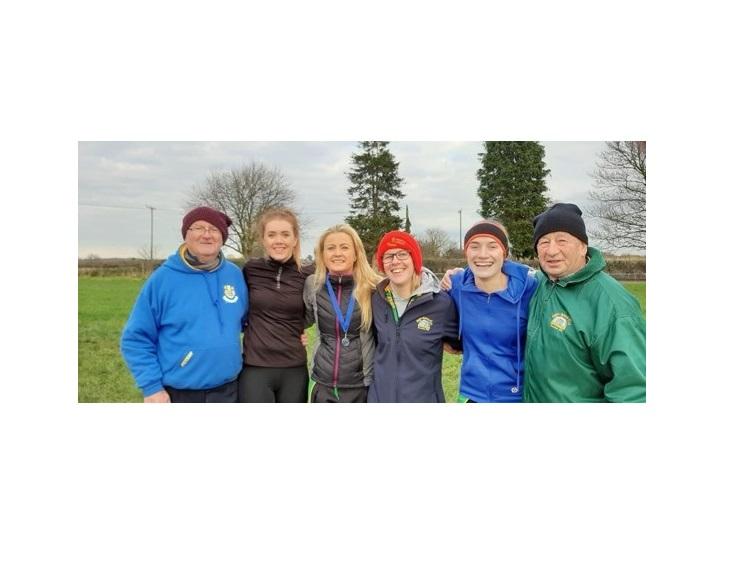 Munster Juvenile B Cross-Country Championships
The Munster Juvenile B Championships took place in Turnpike, Two Mile Borris on Sunday December 1 on a cold and dry morning. With perfect underfoot conditions, our athletes donned their singlets and waited patiently for their races.
First out on the course were the U9 Girls running 750m. Molly Jones and Ellen Harrington were our 2 competitors in this race where they finished 20th and 38th respectively. Molly was also a member of the Tipperary team who finished 2nd. Next out was the U9 Boys. Gerard Delaney finished 35th, Seán Cahill 47th, Michael Doyle 57th and Darragh Moore 59th. They finished eighth in the club competition. Well done boys!
The U11 Girls ran 1000m taking in the upper part of the course. Ruth Phelan led the Moyne contingent to the finish line in 18th position, followed by Reiltín Morrissey 39th, Ciara Joyce 59th, Olive Spillane Leane 69th, Emily Cahill 75th, Saoirse Deegan 76th, Maria Doyle 77th and Heidi Maher 79th. The girls finished eighth in the team competition. The U11 Boys race saw Jack Guilfoyle finish in 59th position, David Nolan 74th and Noah Murphy 96th.
The U13 Girls were running a distance of 1500m where Alana Spillane and Gráinne O’ Loughlin were competing. Alana finished 21st and was also a member of the Tipperary team who placed 2nd overall. Gráinne finished in 81st position. The boys running for the club at U13 level were Adam Phelan, Jack Cahill, Adam Spillane Leane and Frank Doyle. Adam Phelan led the club home in 21st place, followed by Jack 36th, Adam 45th and Frank 54th. Adam Phelan, Jack and Adam Spillane Leane were also members of the Tipperary team who finished 3rd overall.
Aisling O’Loughlin and Moya Brennan were our 2 athletes running in the U15 Girls category. They both ran steadily to finish 24th and 27th respectively. The U15 Boys were out on the course next with Michéal O’ Mahony finishing 13th, Jake Bowe 18th and David Doyle 24th. All 3 boys were members of the Tipperary team that finished 3rd.
Well done to all the juvenile athletes who represented the club so proudly.

Munster Intermediate Cross-Country Championships
Now that all the juvenile races were done and dusted, it was the turn of the Intermediate Ladies and Men. Angela Fogarty, Sharon Cantwell, Louise Fogarty and Aisling Maher took to the 5k course. With a fast pace being set right from beginning, it was clear that this was going to be a battle to the finish line. Angela led the club home to finish strongly in 6th position, followed by a super running from Sharon Cantwell 20th, Louise 22nd and Aisling 31st. The ladies finished 4th in the club ranks. Angela was a member of the Tipperary team that finished 2nd. Last out on the course were the Intermediate Men where Patrick Bowe was our sole competitor. Pakie finished in 31st position in a very competitive field. Well done to each and every athlete. Great running from you all!

County Juvenile B and Novice B Cross Country Championships
The club host the County Juvenile and Novice B Cross Country Championships, on the lands of the Daly family, this coming Sunday, December 8, commencing at 12 noon. All athletes who competed in both Newport and Moyglass and who did not win a medal are eligible to compete. If you wish your child/children to be entered please contact Geraldine asap.

“Down Your Way”
Sincere thanks to everyone who came to the clubhouse on Saturday night last for the recording of the Tipp FM programme “Down Your Way” with Eamonn O’Dwyer. With such a large turnout, a great atmosphere ensued and our thanks to all musicians and speakers who took part. It is expected that the programme will air in the new year.

Registration for 2020
Registration forms for 2020 are now available in the club house. All members, juvenile and senior, need to re-register for the new year. Completed forms and the appropriate monies should be given to club registrar, Sharon Cantwell, over the next couple of weeks.

Club Lotto
Congratulations to this week’s winners John Flynn, Timmy Cullen, Brian Carroll and Jack Renehan who were all winners of €20 in the lucky dip. Our thanks to everyone for their continued support.