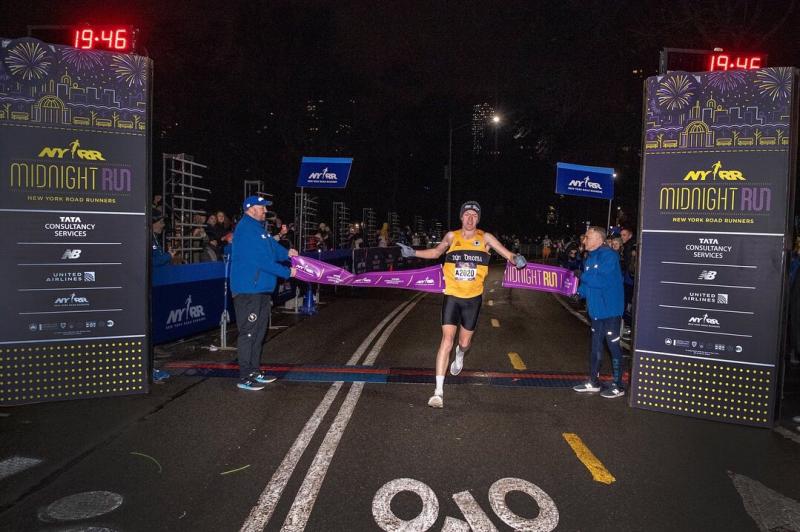 Pictured above Kevin Moore Dundrum Athletic Club crosses the finish line to win the New York New Years Eve annual 4 mile road race. The race which had a field of over five and a half thousand participants is ran in Central Park over one lap of a undulating course. The race started at 11:59 pm and Kevin got away over the last half mile to come home for a great victory in 19:46 five seconds clear of Ben Toomer of the UK with Quentin Succo from France third in 19:58. UK Olympian Eilish McColgan was the winner of the womens section in 20:50 from American International Mary Cain 21:43

ARRAVALE ROVERS 5K
The Arravale Rovers 5k was held on Saturday, January 4 in Tipp Town. Michael Ryan was 2nd and Dymphna Ryan won the Women's race. Also running were Michael Moore and his nephew Stephen McDonald. Michael Ryan's family made it a day out with his wife Karen pushing toddler Isla in a buggy and son Micheàl running and daughter Shona cycling. Great to see families getting out and active together.

MIDNIGHT RUN - NEW YORK NEW YEARS EVE 4 MILE
There was a 4 Mile race held in New York City on New Years Eve. The race starts at 11:59pm, so you are running into the New Year. It's a huge event with 5,500 runners. Kevin Moore had a fantastic 4 Mile and ran in his New Year and decade by winning the race in 19:46. A huge achievement across seas in a large field of runners.