The County Road Championship season got off to a flying start last Sunday with the Novice titles down for decision and  conditions were ideal for both races.

Once again, the Moyne Club are to be complimented for having everything ready.

In the women’s 3K race Gillian Lawlor Ryan of Thurles Crokes set the early pace that soon saw the field well spread out after 600m. Then with 2K to go Courtney McGuire of Clonmel joined her and increased the pace that soon saw her move into the lead. Courtney made every stride a winning one as she increased her lead over the closing stages to come home a very worthy and convincing champion in 10 mins 55 secs.

Then we had Gillian Lawlor Ryan also running well over the closing stages to win the silver medal. Sharon Cantwell of Moyne emerged from the chasing pack over the closing stages to win the bronze medal. For the record Evelyn Maher of Templemore was 4th, with Angela Fogarty of Moyne 5th and Maire O’Shea of Mooreabbey Milers 6th  with Elaine Horgan of Clonmel 7th with her clubmate Suzanne Shine 8th, 9th was Mary Keane of Dundrum  with Laura Carey of Thurles Crokes 10th.

In the team event Clonmel with their three athletes, Courtney, Elaine and Suzanne in the top 8, were convincing winners on 16 points and retained the title for another year. The silver team medals were won by the host club, Moyne with their team of Sharon, Angela and Kate Harrison 13th, on 21 points. The bronze medals were won by the Dundrum trio of Mary Keane, Patricia Ryan and Laura McCarthy Armstrong on 37 points. 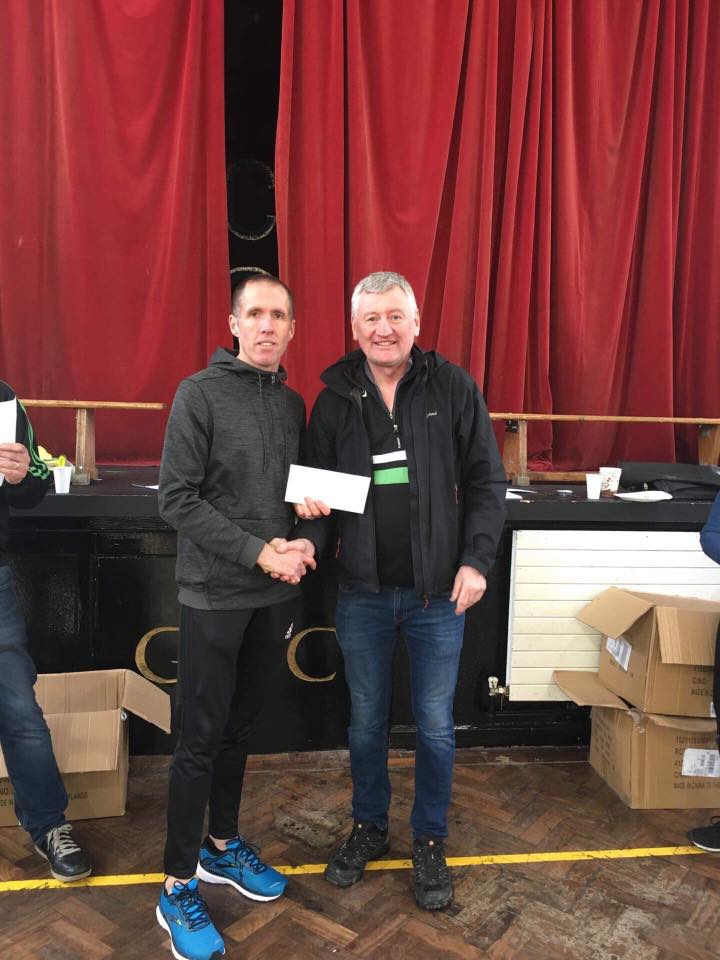 Right from the start of the men’s race Paul Minogue of Clonmel made his intentions known as he set a strong pace that soon saw him open a good lead at the 1km mark. He maintained that strong pace and was still leading as the 4k mark approached. At this stage Derek Walsh of Carrick- on-Suir had eased his way up to the shoulder of Paul and both were matching strides for a while. Then Derek moved clear with Paul in close attention as the chasing pack led by Aaron O’Donnell (Carrick-on-Suir), and which also included Ben Coughlan (Mooreabbey Milers), David Sheahan (Nenagh Olympic) and Colm Bradshaw of (Dundrum) were closing.

As the leaders came onto the track with 400m to go Derek was still leading and he maintained that strong pace to come home a very worthy and convincing champion, with Paul Minogue winning the silver medal. The battle for the bronze medal was won in the closing stages by David Sheahan (Nenagh Olympic) with Ben Coughlan (Mooreabbey Milers) 4th, Aaron O’Donnell (Carrick-on-Suir) 5th and Colm Bradshaw (Dundrum) 6th.

In the team event the Carrick-on-Suir team of Derek, Aaron, Andrew Downey and Patrick Roche were convincing winners of the Inter Club title on 25 points. This was a brilliant team effort and congrats to Carrick-on-Suir for winning this title for the very first time. The battle for the silver and bronze medals went down to the wire with just one point separating Dundrum and Clonmel.

At the presentation of prizes, the County Chairman, Billy Purcell, thanked the Moyne Club for promoting two very good races and it was great to see both races well supported by all the clubs.