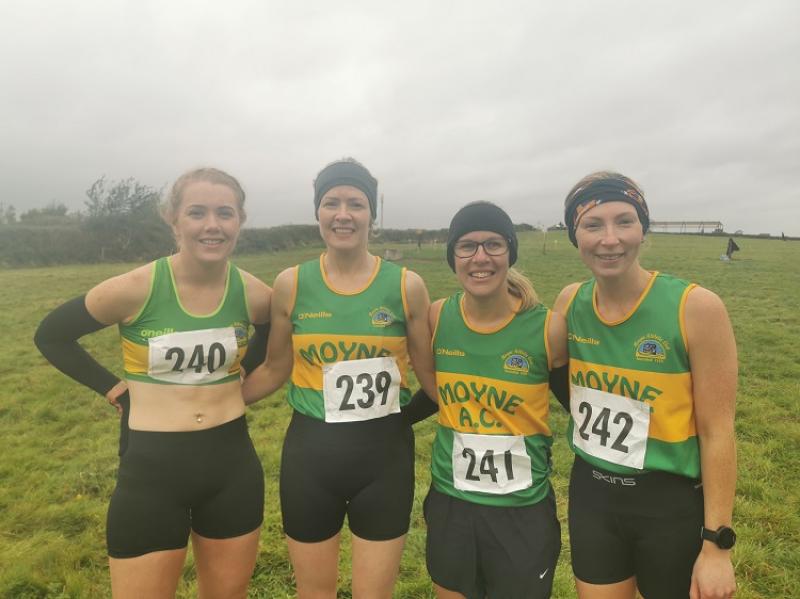 While it would normally be the ladies who would have the bigger numbers competing it was the turn of the men on Sunday as 7 men and 4 ladies took part in the County Novice Cross Country Championships. The ladies were the first away and with a field of 19 athletes it was always going to be a tough task for all involved. With a red-hot pace being set at the front, it took its toll on the athletes and while Sharon Cantwell pushed to the head of the field from the off, the relentless pace out front eventually took its toll but credit to Sharon as she continued her push throughout the race to finish 5th overall. Having the race of her life was Sinead Tynan who started very conservatably but as the race progressed moved steadily through the field to finish 6th with Aisling Maher running strongly throughout to finish 8th and Bernadette Spillane having a very steady run to finish 11th. The girls combined brilliantly to finish second team and the silver medals.

The might of 42 men faced the starter in the Novice Men’s event over 6k with club debutant Shane Kenny moving to the front from the off. While he tried to break the field by his fast start, the quality behind gradually reeled him in and though keeping his strong pace going throughout he was eventually joined by Stephen Flanagan. Both athletes worked off each other and at the finish Stephen was 7th with Shane in 8th. Jody Sweeney and another debutant at this level David Russell traded places during the race with Jody finishing 24th and David 25th. Brian Carroll, Pakie Bowe and John Renehan, another first timer, all settled into the pace of the race and fed off each with Brian coming through for 26th, Pakie 29th and John 30th. The men were very much in the hunt for bronze team medals but in the end had to settle for fourth place.

Well done to all the athletes for the commitment on Sunday and with the County “B” not far off, these performances will give them a boost ahead of this championship.