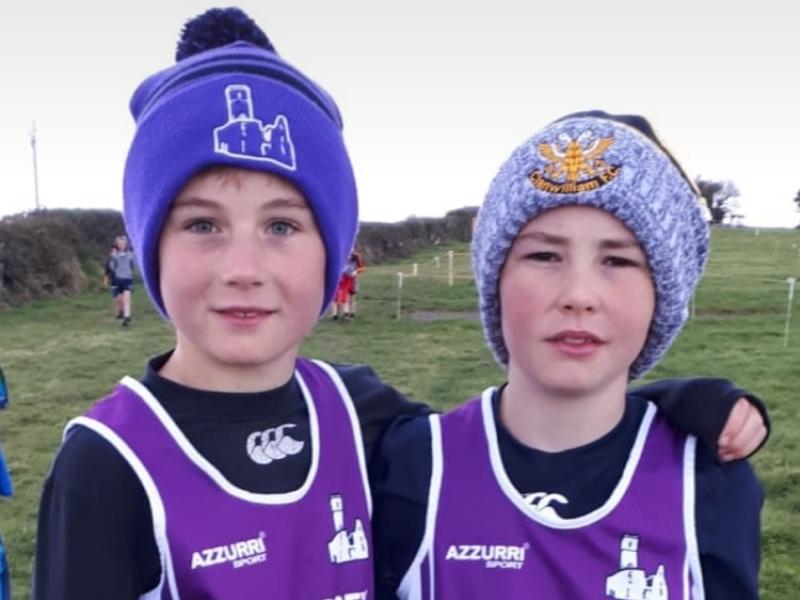 The Kinnane brothers at a cross country event

Following on from the success of last weeks juvenile virtual cross country event this week I'm chatting with some of our juvenile parents as to why Mooreabbey Milers AC was the club of their choice for their children.

Mum of four Siobhan Kinnane tells me their weekly trips to Galbally started in 2017 when her eldest son Seán joined the Mooreabbey Milers. He had been hearing great things from his cousin Michael Hayes who was already a member and wanted to give it a try. They have rarely missed a night since. Gearóid was next to join in 2018, Cormac followed in 2019 and finally last January Aisling reached joining age. Siobhan states each sibling watched on for their time to join the club and for some of them it couldn't come fast enough. Siobhan says all four children whole heartily love their training each Monday night and they always leave the field with a smile. There is a very positive atmosphere at training and a wonderful sense of belonging within the club. There are children converging from many neighbouring parishes but they are all there to run in the Mooreabbey Milers purple and white singlet. Siobhan likes this as her own children attend single sex schools so she is happy that her four are mixing with both genders at training. The set up at training is extremely professional and every coach who is volunteering gives 100% to every child in attendance. The ethos is very obvious, inclusion for all. Cormac who is 8 years old tells me what it is that he likes best about Mooreabbey Milers. His response was "it's fun, I like pushing myself and being competitive". Siobhans only daughter Aisling will turn 7 soon and her reply was "I love running with my friends and doing the stretches with John and Patricia". Aisling states "running keeps me fit and healthy". Siobhan tells how her children love to compete at events such as Cross County and at indoor competitions. The Kinnane family were all very much looking forward to the County Vitural Cross Country which was held the weekend before last for all club members who wish to take part. Given the year that was had and that we are still very much in the midst of a pandemic, running and exercise is vital for everyone especially our young people. Finally Siobhan offers a sincere thanks to everyone who helps to make training happen each Monday night for the juveniles, it is really appreciated.

Ellen Hanleys two boys came to the club in 2019. I asked Ellen why she picked Mooreabbey Milers, Ellen says she knew Tom Blackburn with many years and he was always supportive of her own bit of running. Tom's wife Patricia always showed her a huge welcome anytime she met her and was she was always full of kindness. Ellen states because of this she knew her two boys would be "minded and encouraged in their own bit of running".The boys say themselves that they "aren’t runners they are rugby players" but they both enjoy their trips down to Galbally on Monday evening. Eoghain loves distance while Will loves sprinting. Ellen tells me the boys enjoy Tom and the pod they meet. In Ellens own words "It’s all positive here in our crazy home and would advise anyone with a running interest to join mooreabbey milers". A final word from Ellen leaves us with "Thank you for having my boys and maybe Tom just might get them to even be brave enough to go to a race". We can see the confidence is growing as we can happily update you all with both boys recently competing in the recent national vitural cross country with the boys placing first and second on there respective race.

Ann MacRaith says she choose the Mooreabbey Milers as the club for her family as it is located in Galbally which gave them easy access especially with the restrictions in place. Anne wanted her children to get out to have exercise, make friends and give them the opportunity to try something new. When asked what the children like best, she says "My two love the club'. Alice especially likes to meet her friend due to Covid they don't get to spend as much time together now as they would have had before and Eugene simply loves running.

I asked John Hayes why he decided to sign his smallies up for running over other activities, John tells me he believes "athletics gives a great base you can use for any other sport and a habit that could last a lifetime". John knew the coaches and the expertise that they all have, along with
the benefits of making new friends and learning a skill you can bring and use anywhere was the deciding factor to choose Mooreabbey Milers AC.
John states that Michael and Ciara like meeting new people and really enjoy the Halloween/Easter fun runs. John hopes to see more juveniles competing and recommends adding field sports to training.

Finally Marie O'Shea keeps it simple and says "my lads love everything about the Milers, the great training sessions on a Monday night, the health benefits being out running brings and the character building that comes with racing". Marie highlights most importantly the fantastic friendships that Aoife, Niall and Colm have made. A final word from Marie being how she felt that the virtual cross country event really showed what a great club it is!

We are currently unable to take any new members but new registrations will be welcomed in January 2021.